Save when you buy pre-owned devices

Used
No offers for this configuration
Used 30-day money back guarantee.

Image not available for
Color: 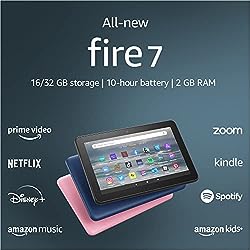 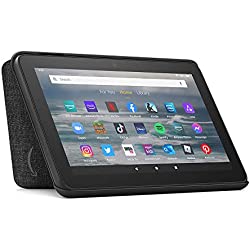 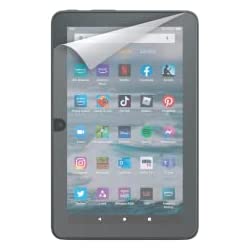 Amazon Customer
5.0 out of 5 stars On the fence? Read on!
Reviewed in the United States on June 29, 2022
The tagline for the 10th gen Fire 7 is “Tiny price, big fun” and I gotta admit, whoever came up with that, nailed it. It is tiny but it works great. Here is the thing, know what to expect and you won’t be disappointed.Positives:-The new Fire OS is a significant improvement. It is closer to current android, and it is intuitive-ish if you have used an Android phone before.- The processing power and the responsiveness improvement is significant when compared to the previous gen. The promotional material states that it is 30% faster and after trying it, I agree.- Live view on another Amazon device, using specific skills like Ring or WYZE, using Alexa, in general having this as a portable automation control at your fingertips, works very well.- Still has a headphone jack.- Lots of battery time.- Supports up to 1TB microSD card. Running it with 256GB just fine.- Made with environmentally conscious materials.- Voice control is as good as with any other Amazon device.- Still works great for reading your E-books and browsing the web. This review was written in it, btw.Negatives:- A lot of the same negatives of the previous Gen. Screen Resolution? Still 1024X600. Memory? Still 16GB, maybe 32GB if you cough up another 20$, which I did.- No fast charge means that given that the battery is larger than the previous model, the charge time is also longer.Other thoughts:I intend to use this tablet as my portable hub for my amazon devices; so far it works great for that. I did a bit of streaming and internet browsing and it works great for that too, albeit the resolution could definitely better, which I knew coming in. It is significantly faster than its predecessor.Given that I like the previous one, I am pleased. Don’t get me wrong, I would prefer to have a better resolution or more memory on the starting model or maybe even better speakers (plural), but Amazon improved the model significantly in another area (performance) without significantly affecting the price. Thus, while it is not perfect, I give it five stars. Recommended!TLDR; The new fire 7 is FIRE. Worth every penny.
Images in this review

C. Bayne
VINE VOICE
4.0 out of 5 stars Great FOR THE PRICE
Reviewed in the United States 🇺🇸 on June 30, 2022
Digital Storage Capacity: 32 GBOffer Type: Lockscreen Ad-SupportedColor: DenimStyle: Fire 7Verified Purchase
I was an early Kindle Fire adapter, but I think the last one I bought was in 2017. So this one is definitely a step up from that. I just got tired of the Fire OS - it was too locked up and not as robust as regular Android. Plus, there is one mindless Android game that I love that isn't available in the Amazon App Store, so that's a thing.

I like to talk a lot before getting to the actual review. Sorry. Context is important for me.

I decided to buy a new Fire because I wanted something a little larger than my phone screen (I have a Samsung Galaxy Z Fold 3, which actually has a pretty large screen) to watch movies on when on vacation. Fires tend to be cheaper than most tablets, so I looked there first. This came up with decent specs for an amazing price, so I bought one. Then realized that it wouldn't be out until 6/29.

I got it yesterday and set it up. Here are my impressions:

Pros
- Perfect size to watch movies on an airplane tray table
- Decent screen resolution (my eyesight isn't what it used to be, and this is still better than everything I had growing up)
- Made for Amazon environment, so Prime Video, Audible, and Kindle books work great. Mostly.
- Most of the apps I use are in the Amazon Appstore
- I paid $94 to get this without ads and to get the 32gb size - that's way cheaper than a comparable name brand tablet anywhere else (I'm looking at you Samsung & Apple!)
- There's an expandable memory slot - I have a 128gb micro SD card in there (It makes you format the card before you can use it)
- USB-C cord!!!!!! I don't know when Fires switched to this, but I'm glad they finally did
- Amazing battery life. I downloaded a whole bunch of shows and also reset a couple of times. Then downloaded again. After several hours of aggressive usage, it's still at 66%.

Cons
- Wow, this is slow. I'm comparing it to my phone, which is technically top of the line as of last November, and this is slow. It's also $1400 less than I paid for my phone, so while it's annoying, it's not enough to knock off a whole star.
- Can't fast charge. Not a huge issue because the battery is pretty big & I have to sleep sometime, but still.
- Can't download the one game I want from the Play store. Yes, I know that there's a way to do it, but it's annoying that it's not easy out of the box.
- Not all the customer service people know enough about this to help when you have issues. (Yeah, technically not the unit's fault, but as someone who was DM'ing with them for 2 hours yesterday and talked with 4 different people, I'm putting this con somewhere!)
- Can't save Prime Video content to the SD card. At least you can't download there. That's why I got the card. I'm not sure I can transfer Prime Videos between internal & SD yet. I think this is the same for all Amazon content.
- I kept getting "service_error" when I downloaded tv episodes that I had purchased, even when the episodes weren't on another device. According to Customer Service, you can only have them on 2 devices. I only had them on one, and I deleted them off that one, and I still kept getting the error.

TL;DR: This is a really, really good tablet, bordering on great FOR. THE. PRICE! The form factor is awesome for travel, and as long as you play in Amazon's sandbox, the experience is mostly good. I did have a lot of problems downloading episodes, which is actually why I bought this in the first place, and I don't like that you can't download Amazon content to the SD card. I'm not sure if there are legal reasons for that, but I don't like it.

jane doe
5.0 out of 5 stars The storage on the SD card issue can be overcome! UPDATE
Reviewed in the United States 🇺🇸 on September 2, 2022
Digital Storage Capacity: 32 GBOffer Type: Lockscreen Ad-SupportedColor: BlackStyle: Fire 7Verified Purchase
I have had several Fire tablets over the years and loved them. I turned in my old fire7 and got this new one because it specifically said “ 32 GB of storage (add up to 1TB of expandable storage with microSD).” This would allow me to use a 512GB micro SD card so every one of my Kindle books, Audible books and every favorite movie would be available no matter how far off grid or long the storm caused power outage lasts. It would also have meant I would have been able to view all of this media at my parent’s or friend’s homes without using up any of their data allotment.

The listing specifically says “ Add up to 1TB of expandable storage with microSD⁠—more space for downloading content to enjoy on-the-go.” This statement insinuates you will have the ability to view your media while away from internet connection. Turns out this is not true. The listing says absolutely nothing about not being able to store more than a few downloads at any given time. At a minimum I find this dishonest. The comparison table also says “ Storage 16 or 32 GB (expandable by up to 1 TB)” without a mention of the inability to store the entirety of your media on the aforementioned card. Later in the listing it says “ Some apps may require that they are installed on internal storage. App or feature updates may impact available storage.” According to this, if you format the SD card as ‘internal storage’ you should be able to actually USE that internal storage to store your media, but no…