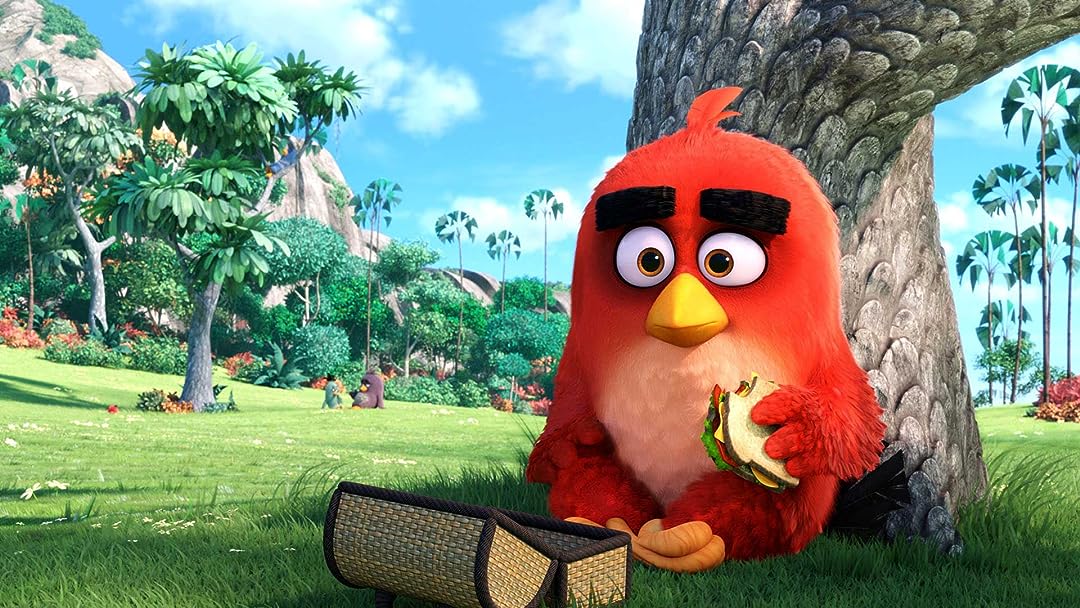 PersonReviewed in the United States on June 19, 2020
1.0 out of 5 stars
Sick
Verified purchase
I was cautiously hopeful that this would be better than some other animated movies of late, but was disappointed. The inuendos and plain sexual humor was outrageous, and I don't want my children to ever watch this again. Why is this rated PG? I didn't used to think much of all the conspiracy theories, but it's hard to not notice how many "children's" movies now a days are loaded with sexual content and morally wrong things that are subliminal or not readily detected by a child. They'll grow up thinking that stuff is normal, since that's what they've been fed, either directly or subliminally. Let's see if Amazon will censor my review.
10 people found this helpful

EinsatzReviewed in the United States on January 24, 2019
5.0 out of 5 stars
“I’m retired….mostly, just tired.”
Verified purchase
An angry red bird is ostracized for being antisocial in a community that won’t allow it. He is ridiculed and mocked. In a flashback it is revealed that he was also bullied as a young hatchling. As it happens, he is the only bird on their small island with even a modicum of good sense. He becomes their reluctant hero, Mighty Eagle notwithstanding. The plot is incredibly simple and straightforward. The bad pigs come to Bird Island, dupe the local yokels, and steal their eggs. The birds join forces and get them back. Why they thought a game would make a good movie is anyone’s guess. But it is deceptively cute and filled with a lot of really “rude” good-humor. A sequel is in the works.
18 people found this helpful

Spicy LeaReviewed in the United States on February 14, 2020
4.0 out of 5 stars
Digital code still works
Verified purchase
The title of this listing says “Digital copy”, the picture shows a case that does NOT say digital, and the listing itself shows the digital code expired. So when I received the movie and it came in a case as pictured. I was surprised to find the digital code insert. The insert showed the expired date in the listing, but I thought I would try it. As on Feb 2020, the digital code was still working.

I was happy with the unexpected digital version of the movie. I thought the movie was actually good, better than I expected based on a mobile phone game. The game is a little silly but fun, kind of like this movie. There are definitely jokes in there for the parents which kids won’t get and I appreciate that. I just thought the scene where they actually enacted out the game seemed awkwardly forced into the movie. As was the entire presence of the slingshot. Some parts of the game fit well into the movie, like the different traits/personalities of the different birds. I just wish they based the movie on the video game but I would have preferred them not literally having the birds being slingshot to knock over things.

March 2022 update: My kids were obsessed with the sequel to this movie (I like it better too, they fixed my complaints for this one). They have rewatched this movie and I enjoyed it better after the initial viewing.

aglaranna300Reviewed in the United States on August 5, 2022
4.0 out of 5 stars
Just some good fun, not to be taken too seriously
Verified purchase
I can understand why a lot of people did not like this, due to several things. It does have a lot of "fake" cussing and sexual innuendos, and does sort of teach that anger is a solution. (Sometimes it can be, and in this case I think was an appropriate response. I was just a little surprised given how it started.) As to whether it's appropriate for kids... I think it depends on the kid and you would have to judge for yourself. Older kids are far more likely to pick up on some things, and very young kids probably won't get it on most of that stuff. The ones in between, depends on the kid. How smart are your kids? Apparently the writer writes for The Simpsons and King of the Hill, so maybe bear that in mind.

I don't have any kids so if I watch a kids' movie, it's for me, and I'm not going to want something that was intended for 5 year olds as that would be boring as heck to me. (I don't assume animated movies are for kids. And I just can't imagine they made this for 5 year olds.) I enjoyed this movie. It wasn't great, but it was pretty good, and many parts were amusing or downright funny. I guess it depends on your sense of humor. I certainly am not going to claim, like one reviewer did, that if you don't think this is funny you've missed all the jokes. That's not true - people have a different sense of humor. My mother would've hated it and thought it was really tacky.

Even though it felt like the movie was saying anger is a way to deal with issues, I was actually happy that it wasn't about dealing with all your anger in a zen sort of way (as the trailer implied). I felt sorry for Red, because there was no excuse for how he was treated, and he was smart and someone who could "see" what was going on most of the time, and it was probably difficult to deal with all the other dippy birds. The other people in anger management class very much amused me. The pigs were well done, though sometimes a bit tacky as well. I loved all the baby birds - they were just too cute. I have a great appreciation for animators in general, and I love when they can make something so cute, or facial expressions that are so right-on. Regardless of humor, subject matter, or whether it's crude - I think it's well animated.

Since so many people mentioned the eagle peeing off the cliff, I guess that's not a spoiler anymore. It was funny, at first, because it was so unexpected. But it just went on for WAY too long and lost any humor. That's one part I did not like. I'm also not sure what politics people are referring to -- I have watched it twice now and still don't get this. Or maybe I was just enjoying it and not looking for politics everywhere.

AGJReviewed in the United States on March 15, 2019
5.0 out of 5 stars
Funny, Funny, Funny!
Verified purchase
Contrary to what some review.say, this movie is funny! If you didn't laught, then you missed the puns and jabs. It's not supposed to be a serious movie but a hilarious one. It's just good silly fun!! One of the best parts is Mighty Eagle's cave with his "Trophies"! I love the store samples and the Eagles' Hotel California gold record. The song is just over-the-top silly. Mighty Mighty Eagle.....
12 people found this helpful

Joshua and StephReviewed in the United States on August 20, 2016
5.0 out of 5 stars
HILARIOUS
Verified purchase
My family saw this movie when it rolled out to the theaters, but recently the kids wanted to rent it for a family movie night. It is certainly worth watching more than once. It had a few moments that I was stunned because of the adult humor, but it wasn't anything harmful. The children didn't pick up on any of the innuendos, but there were a ton of them. It was very very funny.
The production team couldn't have chosen a better cast for the voice of each character. It just fit so well.
29 people found this helpful

KateReviewed in the United States on August 28, 2016
5.0 out of 5 stars
Super cute family movie!
Verified purchase
As a parent I can say I really thought this was going to be dumb

I mean it's the angry birds right?? Yet I have kids who are into them so we bought the movie in SD format I really can't seem to notice the difference from SD to HD quality as the SD plays super clear on the 40" screen compared to our other videos that are HD format

Besides that I really enjoy this movie, it was very comical and had a lot of adult humor yet was family friendly

I won't spoil the movie for you

If you haven't seen the movie make it a family night and watch it, it's a great video for everyone who's looking for a good laugh
12 people found this helpful

Bonnie ElizabethReviewed in the United States on December 21, 2016
5.0 out of 5 stars
Great movie, had to own!
Verified purchase
Considering the movie is based on a game, it's surprisingly great! I took my five year old son -- who is obsessed with Angry Birds -- to see it and planned to daydream the whole time. I was too busy laughing! The story is interesting, the characters are cute, and the puns. Oh my, the puns! Everything from one bird asking, "Are you sick? Bird flu? Chicken pox?" to the yoga pose, "Downward duck" instead of "Downward dog." I have a couple of minor issues that are personal preference.

One character says "Oh my God" a lot, in a funny way, and at funny times. As I try to dissuade my children from saying this, it was a battle afterward to get them to stop. Additionally, one of the puns is "flock my life." My kids didn't pick that up, thankfully.

Overall, it's a great movie, and I purchased it as soon as it came out. My son squealed loud enough to make the theater laugh when the birds first used the skills they're known for. They got some amazing actors (including the guy who did the voice for Olaf and Peter Dinklage) and nothing seemed forced. We watch it at least once a month.
7 people found this helpful
See all reviews
Back to top
Get to Know Us
Make Money with Us
Amazon Payment Products
Let Us Help You
EnglishChoose a language for shopping. United StatesChoose a country/region for shopping.
© 1996-2022, Amazon.com, Inc. or its affiliates