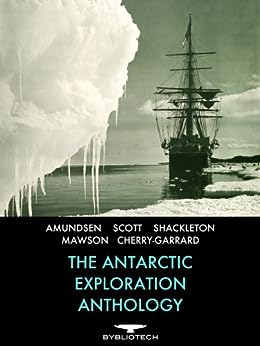 The Personal First-Hand Accounts of the Great Antarctic Explorers

The Greatest Names From the Heroic Age of Exploration: Amundsen, Scott, Shackleton, Mawson and Cherry-Garrard

The frozen continent of Antarctica has always captured the imagination of explorers and adventurers from around the World, most especially in the first few decades of the 20th Century, when the race was on to be the very first person (and Nation) to reach the South Pole.

Each of these intrepid explorers gives their own incredible, stoic, and sometimes harrowing accounts of the almost impossible odds they faced to achieve their goals.

Through success and failure, personal sacrifice, loyalty, rescue and even death, these great explorers advanced the sum of human scientific knowledge and achievement, and richly deserve their place in history.

The texts in this Anthology are unexpurgated, and include appendices, but have all been formatted and optimized for Kindle, and include selected photos, illustrations and maps.

The works contained in this Anthology are:

- "The South Pole, an Account of the Norwegian Antarctic Expedition in the 'Fram'" by Roald Amundsen.

- "The Worst Journey in the World" by Apsley Cherry-Garrard.

- "The Home of the Blizzard: Being the Story of the Australasian Antarctic Expedition" by Sir Douglas Mawson.

Jeff Bedenbaugh
5.0 out of 5 stars A lot of snow and ice for the price!
Reviewed in the United States 🇺🇸 on August 2, 2014
Verified Purchase
I did not know much about polar exploration before reading this book. I now feel very informed on the early exploration at least one pole. I was astounded by the fine line these people walked between life and death. Even though they appear to have been equipped with the best the technology of the day had to offer, it was woefully inadequate. I am convinced that Scott assured his death by a decision he made before even leaving on his expedition. Still, you can only admire his courage, writing letters to the wives of the men who died with him even as he himself lay dying. I read the entire book straight through, but it is a long read and a lot of snow and ice at one time. I would recommend separating it into the various sections, with a break in between.
Read more
6 people found this helpful
Helpful
Report abuse

G. McFadden
5.0 out of 5 stars Great Examples In Leadership
Reviewed in the United States 🇺🇸 on September 19, 2013
Verified Purchase
I will never go to the places these men explored, because I have no interest. Yet, what these stories tell me and demonstrate is leadership. The ability of these men to keep their men together despite the hardships of weather and the lack of food. The story of Sir Earnest Shackleton is worthy of the price of the book alone. This man ran out of food and the crew were down to half-rations. At one point it got so bad that all they got was a biscuit a day. Sir Shackleton gave his only food for that day to an ailing crew member. That is leadership and that is sacrifice. inspiring tales of men who made the vast world we live in a little smaller. Their courage and their leadership are the highlights for me. This collection puts it all together and teaches me how to lead and innovate.
Read more
One person found this helpful
Helpful
Report abuse

Madeleine Roberg
5.0 out of 5 stars Everything in One Book!
Reviewed in the United States 🇺🇸 on September 4, 2014
Verified Purchase
I've always been fascinated by the so-called 'Heroic Age' of Antarctic Exploration, so I knew what to expect when I bought this book, but in truth all the detail I never knew before totally blew me away.

There's a quote in the preface of "The Worst Journey in the World" that really sums up the different qualities of all these incredible explorers:

"For a joint scientific and geographical piece of organisation, give me Scott; for a Winter Journey, Wilson; for a dash to the Pole and nothing else, Amundsen: and if I am in the devil of a hole and want to get out of it, give me Shackleton every time"
Read more
7 people found this helpful
Helpful
Report abuse

Amazon Customer
4.0 out of 5 stars Inspiring.
Reviewed in the United States 🇺🇸 on November 11, 2014
Verified Purchase
I like first person accounts of historical events. This is a good one. It isn't particularly entertaining, but is definitely informative and I found it interesting to compare the personalities and approaches of the different people attempting the same thing.
Read more
4 people found this helpful
Helpful
Report abuse

G. Singer
5.0 out of 5 stars a great adventure story
Reviewed in the United States 🇺🇸 on April 20, 2016
Verified Purchase
unbelievable story, well-written, I had no idea how prolonged the return was, and how masterful Shackleton was
Read more
Helpful
Report abuse

Jere A. Houser
5.0 out of 5 stars Great compilation of Antarctic history
Reviewed in the United States 🇺🇸 on June 24, 2014
Verified Purchase
A combination of some of the greatest books of early Antarctic explorers by some of the greatest explorers. Excellent book for anyone interested in the Antarctic.
Read more
One person found this helpful
Helpful
Report abuse
See all reviews
Report an issue
Does this item contain inappropriate content?
Report
Do you believe that this item violates a copyright?
Report
Does this item contain quality or formatting issues?
Report