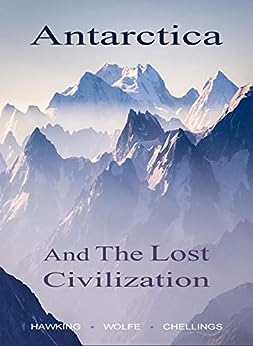 New Release: Explore Evidence of a Lost Civilization on the Antarctic Continent.

For decades the archaeological community labored under the theory that human civilization began only following the last Ice Age. Contemporary discoveries have dramatically undermined that conjecture. Modern research has unearthed hidden cities one after another—archaeology now reconstructs an unsuspected antiquity of man and paints a canvas of stunningly mysterious dimensions. Previous academic accounts of the origins of civilization have fallen forfeit to evidence from archaeological sites worldwide, including Thebes (c. 37,900 BC), Edfu (c. 18,000 BC), Turkey (c. 12,000 BC), Bolivia (c. 15,000 BC), Indonesia (c. 22,000 BC), and most intriguingly, in Antarctica. To explore these remarkable finds and their implications, the explorations in this book are organized as follows:

• Part I: The Ancient Civilizations — Provides archaeological background and information regarding the pre-Younger Dryas Boundary event civilizations, circa 10,770 BC or earlier, and the known cataclysmic astronomical events that eradicated most evidence of prehistoric civilization from the historical record. Examines the ancient traditions and extant evidence of the accomplishments and technology of currently known ancient cultures.

• Part II: A Very Ancient City in Antarctica — Provides a detailed account of the satellite imaging evidence for the remains of an extensive Paleocene civilization existing under the ice of Antarctica, including “intelligently-made structures, resembling some sort of pyramidal and rectangular buildings.” Also examines the ice-core derived, isotopic record from the Paleogene and Neogene geologic periods indicating that the infrastructure of an advanced civilization existed on the Antarctic continent approximately 55.5 million years ago, and may have been inhabited for 300,000 or more years. Examines additional evidence of anomalous high-energy particles emitting from the Antarctic ice sheet.

• Part III: Our Cosmos — An overview of our incredible universe, including recent cosmological and astronomical discoveries, e.g., that the number of galaxies in the observable universe is more than ten trillion, and that our galaxy as a whole may contain over 40 billion “earth-like” (terrestrial) planets. Examines new results of calculating the Drake equation based on the most recent Kepler survey data and detailed studies of exoplanet atmospheres, estimating that extraterrestrial civilizations in our galaxy may number in the millions.

• Parts IV & V: Bonus Anthology Supplement — Mysteries of the Ancient Civilizations — Anthology of related material revealing the profound secret knowledge and esoteric powers possessed by the cultures of ancient civilizations, including prehistoric Egypt and the 4000 year-old kingdom of Zhang Zhung on the Qinghai-Tibet Plateau, along with the powerful abilities that can be attained from the study of that knowledge, ones that convey benefits of great value in our modern world.

We invite you to explore amazing discoveries and knowledge that for long millenniums has remained concealed under layers of legend, myth, and secrecy. A truly incomparable book for anyone interested in expanding their knowledge and personal power, and exploring the realities behind the ubiquitous legends of antediluvian civilizations and the possibility of ancient extraterrestrial influences.

D H
2.0 out of 5 stars Antarctica and the lost civilization
Reviewed in the United States 🇺🇸 on November 3, 2022
Verified Purchase
Antarctica and the last civilization. I have read parts of this in several other places. I wanted more information about the sightings of the area discovered under the ice in the antarctic. Not much was said. Disappointing.
Read more
One person found this helpful
Helpful
Report abuse

Weez
2.0 out of 5 stars This isn't about the Antarctic or a lost civilization
Reviewed in the United States 🇺🇸 on June 23, 2022
Verified Purchase
This is a book about the spiritual beliefs of the authors. Although I agree with some of their ideas, I have to give this book only two stars because of the false advertising on the cover.
Read more
9 people found this helpful
Helpful
Report abuse

PW
1.0 out of 5 stars No facts, just opinions. Lots of ads.
Reviewed in the United States 🇺🇸 on September 13, 2022
Verified Purchase
No bibliography and no references. There are many ads for the publisher's other books though. So there's that. Sadly you will learn nothing verifiable about Antarctica or ancient civilizations that may have existed. At least I know to avoid this publisher altogether now.
Read more
3 people found this helpful
Helpful
Report abuse
See all reviews
Report an issue
Does this item contain inappropriate content?
Report
Do you believe that this item violates a copyright?
Report
Does this item contain quality or formatting issues?
Report