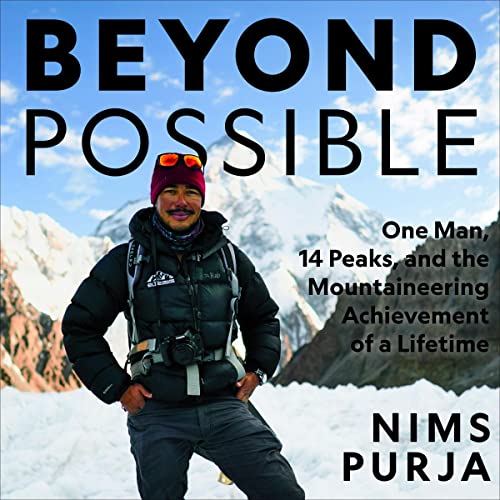 Beyond Possible: One Man, Fourteen Peaks, and the Mountaineering Achievement of a Lifetime

Nepali climber Nims Purja is the first man ever to summit all 14 of the world's 8,000-meter "Death Zone" peaks. He did so in less than seven months, breaking the previous record of seven years.

In this spellbinding memoir, tied to the acclaimed Netflix documentary 14 Peaks, Purja reveals the man behind the climbs, explaining how his early life in Nepal and training as a soldier in Britain's elite Gurkha and SBS units allowed him to achieve a mountaineering mission few thought was attainable. Purja shows how leadership, integrity, and collaboration drive world's greatest climbing feats, including the first-ever winter ascent of Pakistan's K2 - another mountaineering milestone that he achieved in January 2021.

Both profound and inspiring, this intimate book reveals what it takes to go miles beyond the possible.

Your audiobook is waiting!
Learn more about membership
List Price: $17.49
You Save: $2.19 (13%)
By completing your purchase, you agree to Audible’s Conditions Of Use
Sold and delivered by Audible, an Amazon company

RTM
TOP 500 REVIEWERVINE VOICE
5.0 out of 5 stars Inspiring Adventure in the World's Highest Mountains
Reviewed in the United States 🇺🇸 on August 16, 2022
Verified Purchase
Nims Purja tells the story of his life and amazing quest to climb all 14 of the world's 8000 meter peaks in record time. This bock makes a good companion to the documentary film, and I recommend both. Purja first describes his childhood in Nepal, being accepted into the Gurkhas (a part of the British Army), and then succeeding with the strenuous selection process to become a member of the British Special Forces. Purja embraces the complex and dangerous challenges involved, and serves the UK in combat deployments. After a hiking and climbing trip to his homeland, Purja becomes determined to scale the world's highest peaks, despite his lack of experience. Leaving the army, he succeeds with several initial climbs, and then creates the insanely difficult goal of climbing in quick succession all 14 of the 8000 meter peaks. The book covers each climb, but with emphasis on the first half of this project. There are also some photos included, but the film gave me a much better appreciation for the challenges and risks involved. Overall, I very much enjoyed this book, which illustrates the enormous untapped potential of human beings to accomplish difficult goals in our lives.
Read more
Helpful
Report abuse

Beth P.
4.0 out of 5 stars Great story
Reviewed in the United States 🇺🇸 on February 27, 2022
Verified Purchase
I loved watching the documentary on Netflix, and the book definitely takes you into his mindset. I agree with other critiques that while justified, Nims is not humble about his accomplishments. He is supremely high on himself, and strains himself patting himself on the back throughout the book. It sometimes seems like he has a chip on his shoulder over all the times he was doubted on his quest. Nonetheless, an amazing story and accomplishment.
Read more
3 people found this helpful
Helpful
Report abuse

ArlingtonMom100
5.0 out of 5 stars Great book about accomplishing one’s goals!
Reviewed in the United States 🇺🇸 on March 27, 2022
Verified Purchase
I bought this for my 13 year old son who loves climbing mountains, and reading about people who have done so. He loved this book and tore through it. He’s a strong reader so I was glad I didn’t wait for the young adult version. I’m not sure Nims Purja’s approach is one I’d like my son to emulate (Nims seems to put safety second to summitting), but the story was inspirational and well written all the same.
Read more
One person found this helpful
Helpful
Report abuse

Amazon Customer
5.0 out of 5 stars inspirational, real, raw
Reviewed in the United States 🇺🇸 on May 18, 2022
Verified Purchase
Highly recommend this book!! This book not only tells story of NIMSDAI journey, but will inspire you to work on your dream and imagination. Great book that will help you kick start your journey of imagination.
Read more
Helpful
Report abuse

DG Simmons
4.0 out of 5 stars No point reading the book if you watched the documentary
Reviewed in the United States 🇺🇸 on January 13, 2022
Verified Purchase
The Netflix documentary was great and I recommend it to everybody however, the book offers very very very little in additional value for the cost and time invested. I was expecting something one or two levels deeper than the documentary but it simply wasn't there.

I would've given the book three stars but out of respect for Nims I gave it four.
Read more
16 people found this helpful
Helpful
Report abuse

Balsand
5.0 out of 5 stars Beyond Possibe
Reviewed in the United States 🇺🇸 on April 2, 2022
Verified Purchase
This is a great adventure, testing the limits of human endurance of body and mind. Nims Purja, is probably the greatest mountaineer in history and leads a Nepali team to climb the 14 highest mountains on earth while shattering many climbing records.
A must read for adventure seekers!
Read more
Helpful
Report abuse

CJ
5.0 out of 5 stars Amazing book
Reviewed in the United States 🇺🇸 on April 16, 2022
Verified Purchase
This book came on time and is an amazing read, as advertised. Nims is a true pioneer in the world of mountain climbing and his whole life is an inspiring tale to never give up.
Read more
One person found this helpful
Helpful
Report abuse
See all reviews