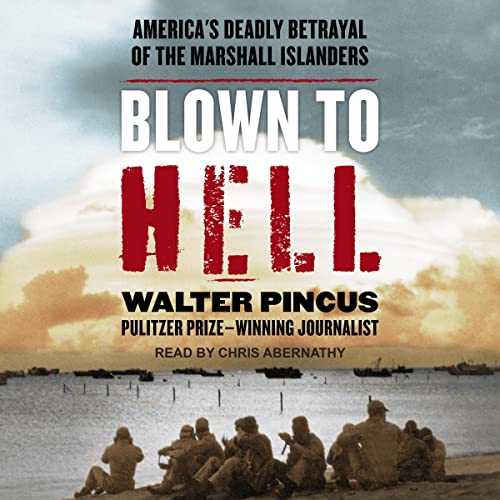 Blown to Hell: America's Deadly Betrayal of the Marshall Islanders

The most important place in American nuclear history are the Marshall Islands - an idyllic Pacific paradise that served as the staging ground for more than 60 US nuclear tests. It was here, from 1946 to 1958, that America perfected the weapon that preserved the peace of the post-war years. It was here - with the 1954 Castle Bravo test over Bikini Atoll - that America executed its largest nuclear detonation, a thousand times more powerful than Hiroshima. And it was here that a native people became unwilling test subjects in the first large-scale study of nuclear radiation fallout when the ashes rained down on powerless villagers, contaminating the land they loved and forever changing a way of life.

In Blown to Hell, Pulitzer Prize-winning journalist Walter Pincus tells for the first time the tragic story of the Marshallese people caught in the crosshairs of American nuclear testing. From John Anjain, a local magistrate of Rongelap Atoll who loses more than most; to the radiation-exposed crew of the Japanese fishing boat the Lucky Dragon; to Dr. Robert Conard, a navy physician who realized the dangers facing the islanders and attempted to help them; to the Washington power brokers trying to keep the unthinkable fallout from public view...Blown to Hell tells the human story of America's nuclear testing program.

Your audiobook is waiting!
Learn more about membership
List Price: $17.49
You Save: $2.19 (13%)
By completing your purchase, you agree to Audible’s Conditions Of Use
Sold and delivered by Audible, an Amazon company
Share

jt smith
5.0 out of 5 stars Vital reminder
Reviewed in the United States 🇺🇸 on November 30, 2021
Verified Purchase
Walter Pincus is a wise and tenacious author. In bringing to light the consequences of atmospheric nuclear weapons testing in the 1940s and 50s, he gives new generations a vital reminder of the awful consequences that would attend any use of nuclear weapons. He also gives a searing recounting of the injustices we visited upon the Marshallese Islanders who found themselves “ in the way” of their superpower trustee. I sincerely hope that this compelling book receives the readership and attention it deserves.
Read more
3 people found this helpful
Helpful
Report abuse
See all reviews