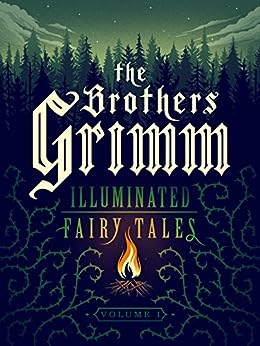 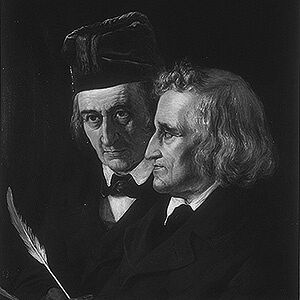 This book can be read on any device, including Kindle E-readers. It may include art, animation, or video features that can be viewed on certain Fire tablets and the free Kindle app for iOS and Android. You can switch features on or off at any time. Learn more  |

From “Rapunzel” to “Hansel and Gretel,” Grimm’s Fairy Tales have enchanted readers for generations. This dramatic Kindle in Motion edition presents seven classic stories—each restored to its original version and reimagined with modern digital illustrations.

Each tale is lovingly portrayed by a different artist: Kali Ciesemier’s vibrant colors animate the thorny path of “Briar Rose.” The sinister course of “Hansel and Gretel” takes a twist in the candy hues of Peter Diamond. Daniel Krall’s richly detailed line work shines amid the wickedly dark “The Juniper-Tree.” Nicolas Rix’s charming storybook style delights in “The Frog-Prince or Iron Henry.” Ashley Mackenzie’s golden tones light up the ball in “Cinderella.” Horses, ducks, and birds turn macabre in Wesley Allsbrook’s wildly gestural portrayal of “The White Snake.” And Rapunzel lets down her hair in Rovina Cai’s hauntingly beautiful drawings.

Jakob Ludwig Karl Grimm (1785–1863) and Wilhelm Karl Grimm (1786–1859) were born in Hanau, Germany. The brothers studied law at the University of Marburg, but it was their eventual work in folklore and linguistics that would make the brothers famous for centuries to come. In the early 1810s, the brothers collected their first folktales and completed them in written form. By 1818, they had published two volumes of German legends, or Deutsche Sagen, as well as a study in the history of German literature, Altdeutsche Wälder. In 1830, the brothers joined the University of Göttingen, where Jakob was a professor of linguistics and Wilhelm was an assistant librarian, before taking on professorships in Berlin, where they lived out the remainder of their lives. Today, the Brothers Grimm are synonymous with some of the world’s most renowned fairy tales, including “Cinderella,” “Rapunzel,” and more.

“Rapunzel”: Hailing from Melbourne, Australia, award-winning illustrator Rovina Cai received her undergraduate degree in communication design at Melbourne’s RMIT University and her MFA at the School of Visual Arts in New York. Her work has been published by the Society of Illustrators and annuals such as Communication Arts and American Illustration. She has won gold medals from Spectrum Fantastic Art and Illustrators Australia.

“The Frog-Prince or Iron Henry”: Nicolas Rix is a freelance illustrator and character designer from Cape Town, South Africa. He’s been heavily influenced by the Harry Potter books, The Lord of the Rings, and Tales from Earthsea, which is reflected in his penchant for illustrating wizards, witches, knights, and other magical creatures. He has illustrated for animation studios, advertising agencies, comic book publishers, and more.

“The Juniper-Tree”: Illustrator Daniel Krall grew up on a small farm in Fontana, Pennsylvania, and attended the Maryland Institute College of Art in Baltimore, where he now lives and works as a freelance illustrator and writer. His work has appeared in various magazines and newspapers, including the New Yorker, Wired, GQ, and the New York Times. He has also designed for books, advertising, games, television, and film.

“Cinderella”: Ashley Mackenzie is a Canadian illustrator living in Edmonton, Alberta. She graduated from the Ontario College of Art and Design, where she received the 2013 OCADU Program Medal for Illustration. She has designed for a variety of clients, including the New York Times, Scientific American, the New Republic, and Tor.com. Her work has been recognized by the Society of Illustrators, Communication Arts, and Spectrum.

“Briar Rose”: Kali Ciesemier is an illustrator and educator currently teaching at the School of Visual Arts in New York. She has worked with a range of clients, including Cartoon Network, Google, Scholastic, and the New York Times, and has been recognized by American Illustration and Spectrum. See her work at www.ciesemier.com.

“The White Snake”: Wesley Allsbrook was born in Durham, North Carolina, and attended the Rhode Island School of Design. She has been recognized by the Art Directors Club, the Society of Publication Designers, the Society of Illustrators, American Illustration, Communication Arts, and 3x3. She currently lives and works in San Francisco, California. She has drawn for print, the web, comics, and virtual reality.

“Hansel and Gretel”: Award-winning illustrator Peter Diamond grew up in Fredericton, New Brunswick, and studied at NSCAD University Nova Scotia College of Art & Design. He has worked with clients around the world in editorial, publishing, advertising, and fine art, and even contributed to the Eisner Award–winning Little Nemo: Dream Another Dream. Peter lives with his wife, Lisa, and son, James, in Vienna, Austria.

Read on Any Device
Read on any device, just like other Kindle books.

Art, Animation, or Video
May be included and is available at no extra cost. View on any
Art, animation, or video features can be viewed on the following:

(Note: To experience these features, please update your Kindle app to the latest version.)
compatible device.

Two Ways to Read
Experience this work with additional visuals—or switch them off at any time.

The Brothers Grimm, Jacob (1785–1863) and Wilhelm (1786–1859), were scholars best known for their lifelong dedication to collecting and publishing ancient German folk tales. Their groundbreaking Kinder- und Hausmärchen (Children’s and Household Tales) was published in seven different editions between 1812 and 1857 and brought to the world’s attention such unforgettable characters as Cinderella, Hansel and Gretel, Rapunzel, and Snow White.

Mike Cohn
5.0 out of 5 stars Wonderful classic fairy tales and beautiful illustrations
Reviewed in the United States on August 25, 2018
Verified Purchase
I loved the fairy tales collected in this book. Many of them were familiar from the movies and musical adaptations, from Disney and elsewhere. But reading the original versions from the Brothers Grimm brings the reader back to their origins, or as near as we can get. The illustrations accompanying the stories are beautiful, especially when they begin to move. The Kindle in Motion technology helps bring the stories to life and make the experience of reading even more enjoyable.
Read more
7 people found this helpful
Helpful
Report abuse

Brittacakes20
5.0 out of 5 stars Loved it!
Reviewed in the United States on July 26, 2017
Verified Purchase
I really loved the intro to Kindle in Motion, this is a perfect book to start it with. I added the Kindle version with the Audiobook and it brought the book to life. This book would be great for little kids and introducing them to The Brother Grimm Fairytales!
Read more
11 people found this helpful
Helpful
Report abuse

Melissa
5.0 out of 5 stars Seven stories from the Brothers Grimm
Reviewed in the United States on March 26, 2018
Verified Purchase
I really enjoyed this book. I like reading folklore, myths, legends, and fairy tales from all over, and I, of course, have read Grimm's fairy tales before. What drew me to this version was the Kindle in Motion format. The illustrations and animation are beautiful and add to the story.
Read more
4 people found this helpful
Helpful
Report abuse

Jen Lopez
5.0 out of 5 stars Beautiful illustrations
Reviewed in the United States on April 28, 2021
Verified Purchase
It was like the book came to life I loved it. It's such a beautiful book to read to your kids if you want to
Read more
Helpful
Report abuse

sadiekatie
5.0 out of 5 stars Wonderful illustrations make a nice addition to classic stories.
Reviewed in the United States on June 28, 2018
Verified Purchase
Nice little classic read. The illustrations are lovely and the animation is wonderful. This is the second book I have purchased with these kinds of illustrations. I want to read more books made this way.
Read more
2 people found this helpful
Helpful
Report abuse

R. Smith
5.0 out of 5 stars I really enjoyed this moving illustration book
Reviewed in the United States on December 3, 2018
Verified Purchase
This book had some beautiful illustrations as well as included several stories that are not the usual go to is for the Grimm brothers collections.
Read more
2 people found this helpful
Helpful
Report abuse

Lilac Wolf
5.0 out of 5 stars A Lilac Wolf and Stuff Review
Reviewed in the United States on April 4, 2018
Verified Purchase
Only a handful of stories, but the beautiful pictures make it fun. I am 100% sold on this new Kindle style.

Ariel Vernaza
5.0 out of 5 stars I really enjoy this reading
Reviewed in the United States on June 28, 2021
Verified Purchase
I actually love te clips And the Audible voice was quite perfecto for this story telling book. The draw erre excelents too
Read more
Helpful
Report abuse
See all reviews