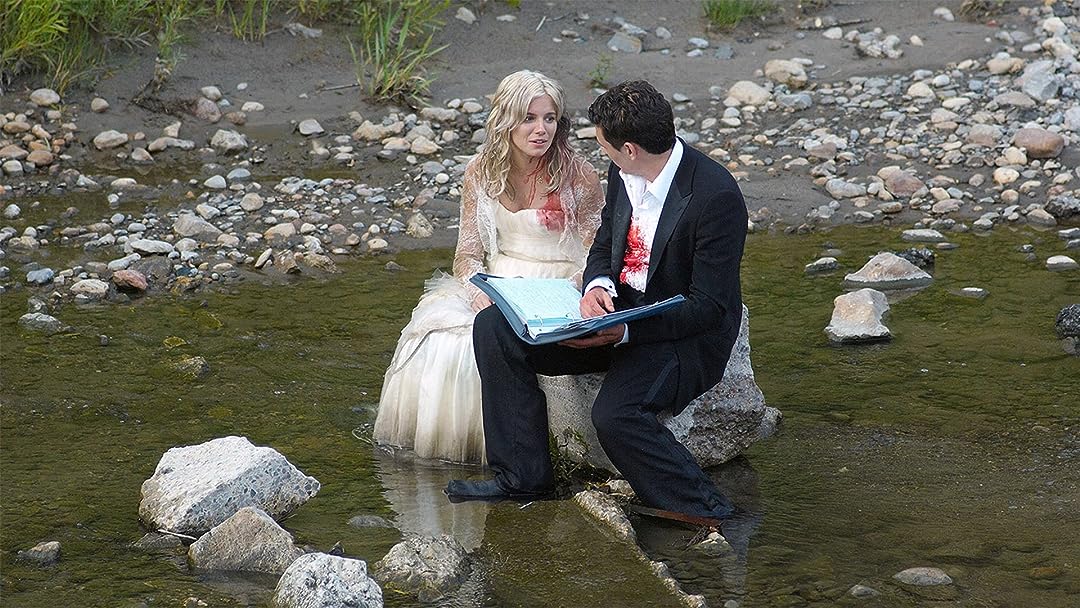 (92)
5.91 h 31 min2009PG-13
Silas Parker marries his parole officer's niece Camille, believing that he can use the romantic honeymoon to flee to Canada. On the way to the border, a reckless truck driver runs them off the road. At first, the new bride seems relatively unscathed, but as her body begins to decay, Silas discovers that maybe she didn't survive the accident after all.

LisaReviewed in the United States on September 27, 2018
4.0 out of 5 stars
Imaginative, quirky and fun!
Verified purchase
While some reviewers thought morbid or demented, I saw it as a dark rom com. There's no gore or anything graphic. There's some obviously fake blood, and some twisted thinking from the writer, but it was not overdone. It's a fantastical tale of love! It wasn't a big budget blockbuster of a movie... no CGI or top notch special effects, but wasn't poorly done either. This movie stars some immensely talented people, including Sienna Miller, David Carradine, James Franco and Scott Glenn.

I don't know why, but sometimes Amazon lists the wrong release year or no year at all. This one is from 2008, according to IMDB. Also, it's rated PG-13.

DarthJusticeReviewed in the United States on June 27, 2011
4.0 out of 5 stars
A Nice Movie
Verified purchase
As of submitting this review, I just finished watching Camille for the first time. I didn't quite know what to expect from the movie as most of the reviews seemed to be evenly spread on Amazon and has a just above average rating on IMDb. But it sounded like a movie I'd enjoy so I decided to check it out. I was somewhat surprised actually. It's not a particularly great movie but a good movie nonetheless.

The movie follows newlywed couple Silas and Camille. Silas is a petty thief on parole who has recently married his parole officer's niece. This is more a marriage of convenience for Silas as he's truly only wanting to get to Canada. Camille however actually does love Silas though she somewhat starts to think early on he might not return the feeling.

On their way to Niagara Falls, the two are involved in a motorcycle crash in which it's discovered later that Camille really did die in the crash. Feeling guilty over what happened, Silas starts being kinder to Camille and the two slowly and truly begin enjoying their honeymoon trip all the while back home, a local sheriff believes Silas has murdered Camille and they go after the two.

The movie actually is a fairly sweet romantic comedy. Good news for guys is that it seems to be pretty evenly directed at both genders and not obviously directed at just women like some romantic comedies. The ending was definitely pretty touching. As far as te actors, I really enjoyed David Carridine as Cowboy Bob the most though all the actors did pretty well. All in all, it's not a movie that will bring a tear to your eye, but is a fun watch.

It might not be a movie you'll go crazy over, but I'd say give it a shot with seeing it.

OligonicellaReviewed in the United States on July 6, 2020
5.0 out of 5 stars
Wow! A sappy, romantic zombie story.
Verified purchase
And a damn good one. I threw this on as background and quickly became enthralled and watching. The two leads really carried it, her utter devotion and his evolving love. Really touching story.

I didn't expect to like this nearly as much as I have.
One person found this helpful

SharkyReviewed in the United States on February 14, 2017
4.0 out of 5 stars
Storyline has a weird twist.
Verified purchase
The first time I watched this movie I liked it. Bought the dvd, watched a few times and ended up giving it away. Kinda strange, yet likable storyline. It is about a young couple on their way to Niagara Falls for their honeymoon. The groom doesn't care for the bride - at first. They get into a motorcycle accident and the bride is killed. However, she continues to act like she is alive. All along the trip she keeps decomposing! They get to Niagara and the end is quite touching. Worth watching.
3 people found this helpful

Texantothebone2500Reviewed in the United States on May 5, 2018
5.0 out of 5 stars
Great little film!
Verified purchase
This film far exceeded my expectations! A little weird at first but stick with it, you won't regret it! Sienna Miller is captivating!
7 people found this helpful

Morgan V. MadisonReviewed in the United States on October 5, 2016
3.0 out of 5 stars
mediocre
Verified purchase
Camille very much wants to marry her boyfriend, who is lukewarm about it.

After wedding, they leave for honeymoon, have an accident, and she is killed - but she comes back to life. He tries to make her happy as she has only a couple of days before she decays.

Weird film. He realizes that he cares for her more after she is dead.
5 people found this helpful

DetectorReviewed in the United States on April 24, 2019
4.0 out of 5 stars
worth a watch.
Verified purchase
thing about these dead movies is they can have some quite painful moments. Overall, a light-hearted movie, love conquers all. Good casting, that's sure.
3 people found this helpful

That Pirate ChickReviewed in the United States on April 25, 2013
5.0 out of 5 stars
Camille
Verified purchase
I probably enjoyed this movie way more than I should have. It's definitely a dark comedy. James Franco plays the reluctant husband that comes across as a bit of an ass to his new bride. Something happens that makes him have a change of heart and the quirky adventure to Niagara Falls begins. Well worth seeing...I laughed out loud many times...but my sense of humor is a bit dark.
7 people found this helpful
See all reviews
Back to top
Get to Know Us
Make Money with Us
Amazon Payment Products
Let Us Help You
EnglishChoose a language for shopping. United StatesChoose a country/region for shopping.
© 1996-2022, Amazon.com, Inc. or its affiliates