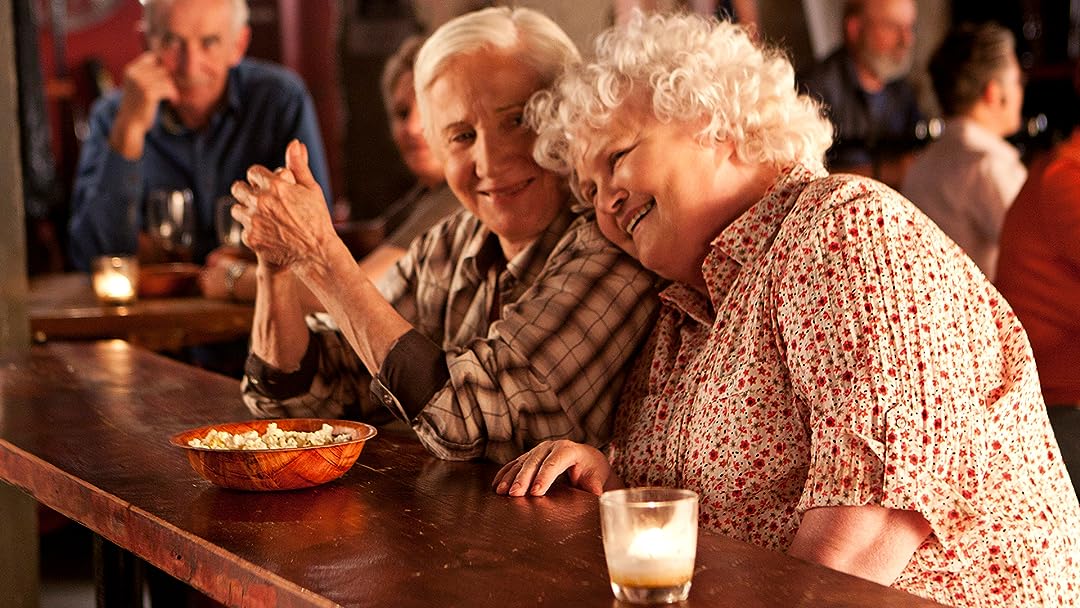 GryphonisleReviewed in the United States on June 19, 2021
3.0 out of 5 stars
No Thelma and Louise, Mildly Entertaining.
Verified purchase
I like full frontal male nudity as much as the next gay guy, but please, at least work it into the plot a little better!

Ads for this film say “Thelma And Louise Eat Your Heart Out”. Hardly. For one thing, they had a young and shiny and shirtless Brad Pitt. This movie has a completely naked stud running about for no good reason and a decent looking guy with no chest to brag of with his shirt open, for even less sense, most of the movie, and a plot sense that having old ladies cuss like, pick your profession, is funny. It isn’t.

Olympia Dukakis plays the life partner of a blind woman, who after 31 years is being shunted into a nursing home by her grand daughter who doesn’t understand the two old women are partners, and when she finds out, doesn’t care. This puts the ladies into running mode, to Canada, where they can get legally married. Along the way they pick up a shirtless hitchhiker who almost pulls his pants down when they stop; Aside from fulfilling the Brad Pitt role here, he doesn’t really have any reason to be in the film other than to provide employment for an actor; the state reason is to turn the twosome Dukakis character is certain the police are hunting for, into a threesome to throw them off (never mind the license plates).

While entertaining, one can’t help asking what Dukakis saw in this script. Ah well.

CherylReviewed in the United States on May 6, 2021
1.0 out of 5 stars
A bit weird
Verified purchase
I have held back on reviewing this one as my opinions are usually positive and uplifting. This one, not so much. There were some funny moments and incidents for sure which resulted in a good many chuckles - sadness too, when one partner must fade away, leaving the surviving one little else, except for the good memories. From that side of things it was good, but it could have been so much more. Easing up on the unnecessary foul language could also have toned it down a little. For example, accepting a lift from a man who in every respect appears to be pretty decent and then being dumped on the side of the road not long after - as a result of a foul mouth, was (in my opinion) just over the top. Not as good as I had expected it to be.
One person found this helpful

nickel platedReviewed in the United States on November 18, 2021
1.0 out of 5 stars
DISGUSTING, OVERACTED, NOT WORTH THE TIME
Verified purchase
This movie is insufferable. As usual, Olympia Dukakis overacts. Her character has a vocabulary only a drunken sailor could tolerate (my apologies to drunken sailors). The screenwriter should seek other employment after writing such a total piece of garbage. What a disservice to older lesbians everywhere. The entire cast should be ashamed. Not a single likable character, and no redeeming storyline. Save your time and your money, watch something else.
One person found this helpful

Lynne SReviewed in the United States on May 30, 2020
5.0 out of 5 stars
Funny, romantic, heart warming
Verified purchase
I've watched this one more than once - and I love it. I'm sure I'll watch it a few more times. A couple in love, on the run just so they can spend the rest of their lives together - Love it!
5 people found this helpful

Luvts4evrReviewed in the United States on November 10, 2022
4.0 out of 5 stars
Watch
Verified purchase
Dukakis is raunchy and bawdy but very believable as a 80 yo lesbian. Dottie and Prentiss are talented additions to this 3 Musketeers combination. I would say full frontal male nudity was done tastefully but not so when Dotties forehead is being slapped by a scrotal sac. It was a touching story with the incredible beauty of Maine and Canada but would have been just as good without the raunch. But watch anyway.

DIVAOFDELIRIUMReviewed in the United States on July 6, 2021
5.0 out of 5 stars
What REAL HUMAN LOVE is about from all angles!
Verified purchase
One of the most "reality-based" movies with a decent entertainment edge and the perfect cast. Olympia Dukakis is my heroine, and loved her delivery of every known acronym of 'lesbian sexual desire'...and I'm a straight woman with a lesbian bff and SO appreciate this movie and it's story. It IS a true one for many and I highly recommend it for all who need a good dose of many kinds of difficult situations in life that can be overcome through pure human kindness and caring for one another. This world (and divided country, usa) needs more of it. Thank you, Canada!
2 people found this helpful

alsgal04Reviewed in the United States on June 27, 2020
5.0 out of 5 stars
great love story
Verified purchase
From a straight, christian, conservative female perspective, this movie was awesome. made me laugh out-loud and cry!!!!! even the language and nudity all seemed to just fit!! nice job all!!!
6 people found this helpful

Sheila K. ShaubachReviewed in the United States on December 3, 2020
5.0 out of 5 stars
Wonderful movie
Verified purchase
This was one of the best movies I've seen in ages. There's something in it for everybody! Very touching and tender, and extremely funny. The cast was great and the scenery gorgeous. I loved the movie.
2 people found this helpful
See all reviews
Back to top
Get to Know Us
Make Money with Us
Amazon Payment Products
Let Us Help You
EnglishChoose a language for shopping. United StatesChoose a country/region for shopping.
© 1996-2022, Amazon.com, Inc. or its affiliates