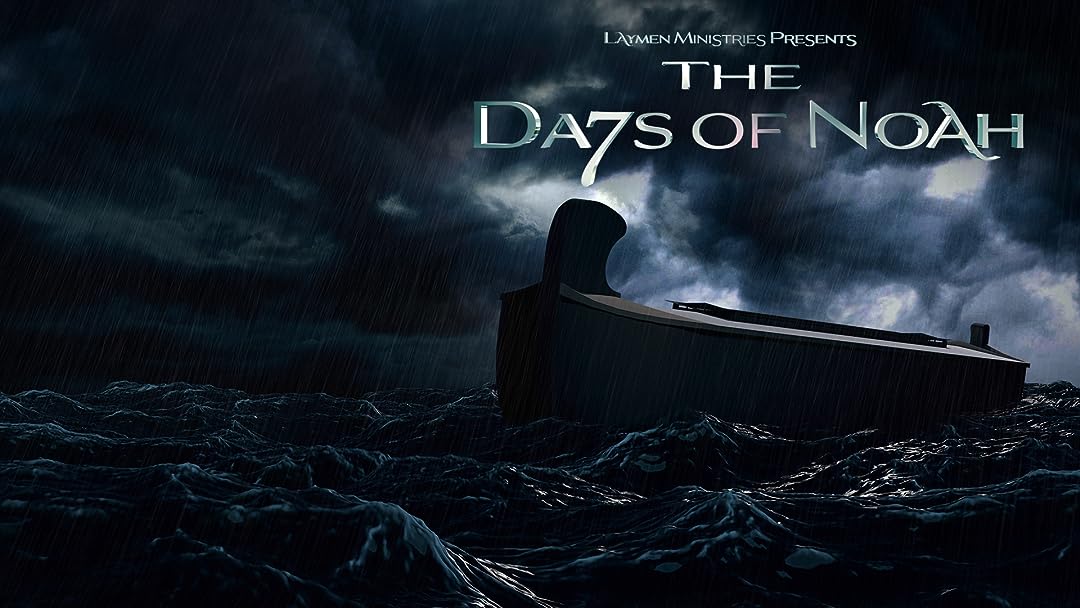 (1,857)
5.81 h 29 min2019ALL
The physical evidence left behind warns us of another judgment to come, but when? The second film in "The Days of Noah" series, "Judgment Hour," answers this question. Just before the Flood, Noah gave a judgment hour message to the world and likewise, a prophecy in the book of Daniel tells us when the judgment hour message at the end of time would begin.

R. L. PriceReviewed in the United States on June 28, 2020
1.0 out of 5 stars
Seventh Day Adventist Theology
Verified purchase
Fortunately I have a good grasp of Bible scriptures since I began reading/studying the Bible after asking the Lord Jesus to be my Savior at age 12. I am now 66. As soon as "keeping the Sabbath Day" was introduced as linked with the Mark of the Beast, I knew the theology was totally off. In my early 30's I met a woman from an Adventist church and read a book she offered to me. The book made a convincing argument, thus I engaged in more research on the topic of "not keeping the Sabbath." I am a sincere believer and if I had been taught error, I wanted to know. The Lord led me to this verse in Colossians where the Apostle Paul is speaking to one of the new churches after the death, burial, and resurrection of Jesus: "16 Let no man therefore judge you in meat, or in drink, or in respect of an holyday, or of the new moon, or of the sabbath days: 17 Which are a shadow of things to come; but the body is of Christ. (Col. 2:16-17) That statement is clear. I showed this scripture to my friend. She had no answer but said she would ask her pastor. I heard nothing more after that.

The Law given to Moses and successive generations of Jews was the Old Covenant - a type or shadow of what was to come in the fulfillment of Christ, the final and perfect sacrifice for the sins of mankind. In Luke 22:20 during the Passover Supper, known to us gentile believers as communion, Jesus said, "20 Likewise also the cup after supper, saying, This cup is the new testament in my blood, which is shed for you." Jesus told His disciples that His sacrifice was a New Covenant - a new promise from God - that fulfilled the Mosaic Covenant and offered salvation to those who believed. Believe what? To the church in Corinth, Paul spelled out the Gospel, the "good news" of our faith and hope in Christ alone - "Moreover, brethren, I declare to you the gospel which I preached to you, which also you received and in which you stand, 2 by which also you are saved, if you hold fast that word which I preached to you—unless you believed in vain. 3 For I delivered to you first of all that which I also received: that Christ died for our sins according to the Scriptures, 4 and that He was buried, and that He rose again the third day according to the Scriptures, 5 and that He was seen by Cephas, then by the twelve. 6 After that He was seen by over five hundred brethren at once, of whom the greater part remain to the present, but some have fallen asleep. 7 After that He was seen by James, then by all the apostles. 8 Then last of all He was seen by me also, as by one born out of due time. 1 Cor. 15:1-2"

Finally, when Gentiles began believing in this good news, the Jewish leaders of the new church - all believers in the Gospel, not a building - held a council to determine what laws these new gentile believers should follow. "And certain men came down from Judea and taught the brethren, “Unless you are circumcised according to the custom of Moses, you cannot be saved.” 2 Therefore, when Paul and Barnabas had no small dissension and dispute with them, they determined that Paul and Barnabas and certain others of them should go up to Jerusalem, to the apostles and elders, about this question." (Acts 15:1-2) Peter made an interesting statement: "And when there had been much dispute, Peter rose up and said to them: “Men and brethren, you know that a good while ago God chose among us, that by my mouth the Gentiles should hear the word of the gospel and believe. 8 So God, who knows the heart, acknowledged them by giving them the Holy Spirit, just as He did to us, 9 and made no distinction between us and them, purifying their hearts by faith. 10 Now therefore, why do you test God by putting a yoke on the neck of the disciples which neither our fathers nor we were able to bear? 11 But we believe that through the grace of the Lord Jesus Christ we shall be saved in the same manner as they.” (Acts 15:7-11) Peter says that no one is able to keep the law perfectly; no man ever has. The determination was agreed upon that the new Gentile believers did not have to be circumsised, nor try to keep the law which Peter described as a "yoke." The decision was made: "19 Therefore I judge that we should not trouble those from among the Gentiles who are turning to God, 20 but that we write to them to abstain from things polluted by idols, from sexual immorality, from things strangled, and from blood." (Acts 15 19-20)

Beware of "another gospel" being taught. ("But though we, or an angel from heaven, preach any other gospel unto you than that which we have preached unto you, let him be accursed." Galatians 1:8 The world is quickly descending into the lawlessness that is described in the Books of Daniel and Revelation, the one world government is being readied (called The New World Order by current government leaders), technology is available to keep track of all humans as would be necessary for the Anti-Christ's totalitarian government. This movie does a good job detailing those aspects of where we currently are in history ie. in the last seconds of the world as we know it; however, the blatant preaching of "another gospel" is dangerous. God bless those who read this.

Jó HírReviewed in the United States on April 11, 2020
1.0 out of 5 stars
This is Seventh Day Adventist religous teaching. Not Biblical!
Verified purchase
This is not Biblical!
Graphic art work is very good.
Teaching is not Biblical.
If I could, I would give it less than one star.
Highly recommend you do not watch.
175 people found this helpful

nonameReviewed in the United States on October 7, 2019
1.0 out of 5 stars
Not Biblical - Part 2
Verified purchase
Part 2 omits identifying the Seven Day Adventist and Ellen White for the 1844 claim for the beginning of the investigative judgment (judgment hour). Read the Bible as written. Don't buy into the allegory of men. John 19:30 tells us payment for our sin is finished with no need to be continued in 1844. No blood is shed by Jesus in heaven and Scripture is clear without which there is no forgiveness of sin. Part 2 is false teaching.
161 people found this helpful

The most important story regarding judgement and removing sin from your life is the story of Jesus. "For God so loved the world that he gave his only son, that whoever believes in him should not perish, but may have eternal life." John 3:16. If you are seeking God and salvation, look to Jesus, the Son of God. He came to earth and sacrificed His life and shed His Blood that the whole world might be saved.

If you believe Jesus Christ is the Son of God, and you ask him to come into your life and save you from your sins. . . and you mean it Then you have been saved and you are born again. Your sins have been washed away by the Blood of Jesus. So, rejoice! Find yourself a Bible believing church, read the Bible, and pray to grow your faith and your relationship with God.

Regarding this video, beware of false doctrines that attempt to mislead non-christians or new unaware christians. "For such men are false apostles, deceitful workmen, disguising themselves as apostles of Christ. And no wonder, for even Satan disguises himself as an angel of light. So it is no surprise if his servants, also, disguise themselves as servants of righteousness. Their end will correspond to their deeds." 2 Corinthians 11:13-15
126 people found this helpful

bereket shibeshiReviewed in the United States on May 31, 2020
1.0 out of 5 stars
It is uncriptural
Verified purchase
It started out well but then they said that the mark of the beast is Sunday worship. That is very off scripture. Col 2;16 clearly says don't let anyone judge you by sabbath day. Jesus didn't keep the sabbath. He was outside ministering not resting at home. Sabbath is an old testament (covenant) law. The new testament doesn't teach sabbath. Their evidence for their claim goes like this. A seal contains a title, name and jurisdiction. On the 4th commandment Gods name title and jurisdiction were written. so sabbath day is God's seal and Sunday church worship is mark of the beast. That makes no sense and any person who reads that verse can see that. don't be fooled. salvation doesn't depend on keeping a sabbath. it is by faith in Jesus alone. You don't go against the foundational truths of the bible to understand the mysteries found in revelation. This video is off scripture so I can't believe what they say about the book of revelation
106 people found this helpful

Fred AdamsReviewed in the United States on August 6, 2019
5.0 out of 5 stars
Clear Scientific Evidence of Noah's Global Flood
Verified purchase
I bought and watched the set of 4 DVDs and highly recommend this excellent dynamic four-part series. It compares the days of Noah with end-time events as portrayed in Revelation, using excellent videography, animation and graphics. The videos are solidly based on the Bible and science, clearly explained in a manner that keeps the viewer's attention.

Some viewers might find apparent discrepancies with their way of understanding Scripture and science. But upon following through to the end, I find that these documentary videos give a clear picture of God's love, mercy and justice.

I appreciate the comparison between Noah's flood and the times in which we are living with escalating evil and catastrophes leading to the biblical portrayal of God protecting those who are loyal to Him while sin, suffering and evil are destroyed by global fire.
116 people found this helpful

Nikki PayneReviewed in the United States on August 4, 2019
5.0 out of 5 stars
Reveals Revelation’s prophecies in a biblically, Compelling and Eye Opening Film
Verified purchase
Sheds light on the Bible prophecies for last days, with vivid representation. We loved how the correlation was clear between the Days of Noah before the antediluvian world was, as Revelation compared it to the last days before Jesus’ return to gather his children. Praise the Lord for this film. Actors accurately captured the imagination in accordance with with scriptures, and or Spirit of Prophecy being read. Very marvelous job. Wish it was shared at all the churches. Thanks God Bless. 🙏🏼
94 people found this helpful