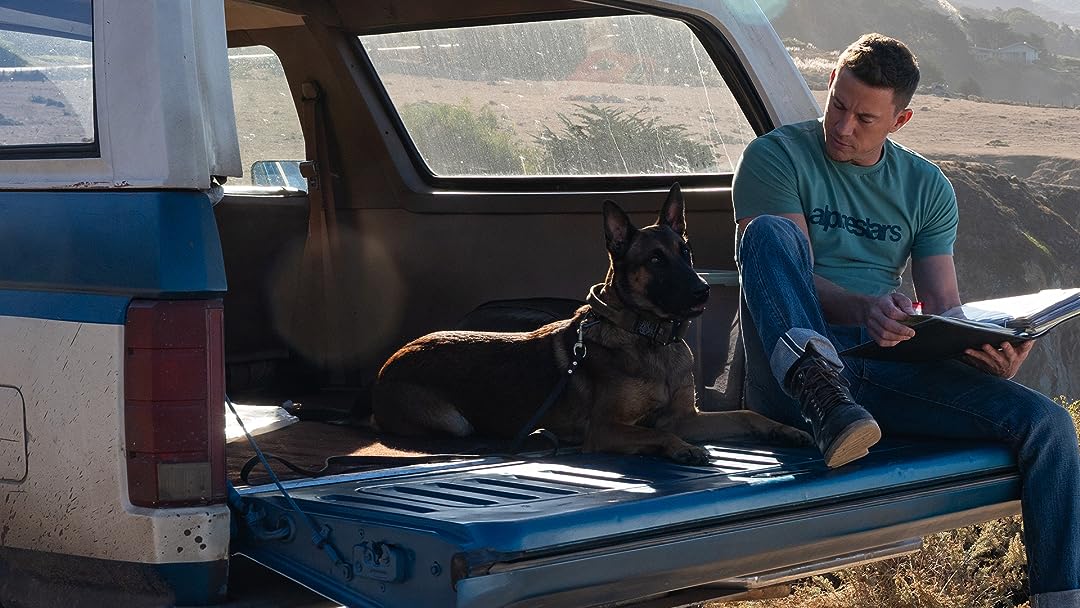 (58,836)
6.51 h 41 min2022X-RayHDRUHDPG-13
In this road-trip comedy, two hard-charging former Army Rangers paired against their will - Briggs and a Belgian Malinois named Lulu - race down the Pacific Coast in hopes of making it to a fellow soldier's funeral on time.

AuroReviewed in the United States on March 14, 2022
4.0 out of 5 stars
Lonely Veteran Needs Dog
Verified purchase
Good story. Definitely give it a chance. Channing Tatum's performance really surprised me. On a personal note, I too am a lonely disabled veteran, and I've been considering getting a service dog. This film has really encouraged me to do so.
117 people found this helpful

Susan McKenzieReviewed in the United States on March 11, 2022
5.0 out of 5 stars
You had me at "Dog". America: Watch this! Veterans: Give it a chance!
Verified purchase
I was impatient at first and thinking, "Oh NO!" until I realized this is targeted for America as an audience, to begin to understand what Veterans experience. So it's introductory on several topics and offers several areas for serious thought. In the end it was REALLY good, and I hope it helps both the general public and Veterans.
However, they had me at the title: "Dog" - Dog lovers will LOVE this movie, and learn a lot about Military working dogs, K9 Warriors and what they go through.
79 people found this helpful

ReginaGReviewed in the United States on March 12, 2022
3.0 out of 5 stars
Not what I thought it would be
Verified purchase
This movie was advertised as a comedy. This is not a comedy, it's a movie about combat veterans. I think if it had been marketed as such, the right audience would have gravitated towards it. It was a disappointment to have rented an emotional drama instead of the light comedy it was advertised to be.
66 people found this helpful

Kitcat's MomReviewed in the United States on March 13, 2022
3.0 out of 5 stars
A bit to close to home
Verified purchase
My nephew committed suicide after serving 2 tours in Afghanistan. He too suffered from a head injury and looking back I think caring for a dog would have been very beneficial. Difficult to watch, would have been nice if they had dedicated the movie to those that gave everything and the gold star families that somehow have to continue forward.. Don't get a Mal they are bred to work not be a housemate. They do advertise it as a comedy but really how funny is death and war.
54 people found this helpful

Elle Shopper LadyReviewed in the United States on September 25, 2022
5.0 out of 5 stars
Five star viewing experience, so why are DOG's credits are at the END
Verified purchase
I am so glad I spent Sunday afternoon with this film! Worth it.

This story it acting, colors, sets and costumes and other film arts were very well done - and overall effect is the BEST - We need films that CONSTRUCTIVELY integrate the PTSD factor in a story to help make it easier for us to deal with it in our lives without fear and ignorance.

Channing Tatum made the film in memory of his own dog named LULU, who passed from canine cancer. Can the producers give part of the film's profits to the cause - or more so to Animal PTSD Rehab? I found out during my Officers' wife/ Redcross Fort Knox days - the Army depends on gifts like that to properly care for its animals, and it just makes sense for this film to win a bit for PTSD sufferers.

One more thing:
Brigg's bonding with Dog for a winner of and ending was grand of course, but a bit abrupt - please spend more time spent on the happy ending, Happy endings ARE valid and supposed to be OURS as we can develop it. Seeing it spelled out in films that support the good without being preachiy WORKS.

But that ending was SPECTACULAR anyway!

I just wish that we could restore humanity in general in ways that deflate PTSD's demons. Restoring some overall decency ought to be our goal.

The awareness of the spectacular richness of life's goodness is the very best healer. Rich or poor, young or old we are all supposed to be able to do that if we will.

Christine A JensenReviewed in the United States on September 24, 2022
5.0 out of 5 stars
Loved, loved, loved this movie
Verified purchase
I was in the Army during Shield and Storm. I can't even begin to tell you the emotion and pain that went through me watching this movie because of my service AND my love for my dogs. I was very impressed with how Tatum portrayed his role in the movie and the response of LuLu during important messages in which this movie was made to display. Yes, I am still crying and praying for all the armed service members out there that had to serve in any conflict, ever, it leaves a mark on your psyche and your soul that will never go away and you will always be different from "civilians" around you who want to understand so badly but miss the mark sometimes, not their fault. As service members we need to remember to be humble and remember where we came from, never take advantage of patriotic privileges and remember we were only out there to continue the dream of freedom our forefathers then mothers, fathers, and children expected us to ensure. I love this movie because it has an emotional tie to veterans everywhere - and don't even tell me you didn't cry...and I love all my enormous amount of brothers and sisters who served regardless of branch or when - we all have our private hell we try to keep at bay...and hopefully all of you have a dog or cat or whatever animal to help keep you grounded and be partnered with in a fulfilling relationship...
36 people found this helpful

KatelynReviewed in the United States on March 12, 2022
5.0 out of 5 stars
Loved it
Verified purchase
Even my husband who is a k9 handler of a Belgian Malinois loved it.
48 people found this helpful

GiftbearerReviewed in the United States on September 23, 2022
5.0 out of 5 stars
Moving Story about Love and Commitment
Verified purchase
There's a reason why dogs are called "Man's Best Friend". This was a story about a veteran man and veteran dog that come back from wartime emotionally scarred and were trying to adapt to civilian life.

The man wants to get back into the service and a commander gives him a task to take this dog, a Belgian Malinois, to his owner's funeral, and because the dog was so traumatized she wouldn't let anyone get near her, so the soldier was told to take her after the funeral is over to an army base to be euthanized.

At first neither is happy about being given this task, but they end up bonding during the long drive and at the end he can't bring himself to leave her there.

There are parts of the movie that are funny, but it is also sad in parts.

I recently lost my dog after 14 years who was part Malinois and there is something about the breed that is like no other. They connect on a deeper level and feel their owners' emotions. It's a shame that so much emphasis is placed on using them as bite dogs because they are much more versatile than that. It's because they are so attuned to their owner that they can be trained for almost anything.

People often don't realize that dogs get PTSD just like humans do and that dogs that are highly intelligent and perceptive may be more susceptible to it because of these traits which make them more like humans than some breeds.

I highly recommend this movie to anyone who loves animals or has an interest in the military or PTSD. You won't be disappointed!
29 people found this helpful
See all reviews
Back to top
Get to Know Us
Make Money with Us
Amazon Payment Products
Let Us Help You
EnglishChoose a language for shopping. United StatesChoose a country/region for shopping.
© 1996-2022, Amazon.com, Inc. or its affiliates