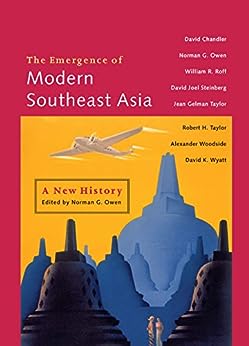 by David Chandler (Author), Norman G. Owen (Author, Editor), William R. Roff (Author), David Joel Steinberg (Author), Jean Gelman Taylor (Author), Robert H. Taylor (Author), Alexander Woodside (Author), David K. Wyatt (Author) & 5 more Format: Kindle Edition
See all formats and editions
Sorry, there was a problem loading this page. Try again.
The modern states of Indonesia, Vietnam, Thailand, the Philippines, Myanmar, Malaysia, Singapore, Cambodia, Laos, Brunei, and East Timor were once a tapestry of kingdoms, colonies, and smaller polities linked by sporadic trade and occasional war. By the end of the nineteenth century, however, the United States and several European powers had come to control almost the entire region—only to depart dramatically in the decades following World War II.
The Emergence of Modern Southeast Asia offers a new and up-to-date perspective on this complex region. Although it does not neglect nation-building (the central theme of its popular and long-lived predecessor, In Search of Southeast Asia), the present work focuses on economic and social history, gender, and ecology. It describes the long-term impact of global forces on the region and traces the spread and interplay of capitalism, nationalism, and socialism. It acknowledges that modernization has produced substantial gains in such areas as life expectancy and education but has also spread dislocation and misery.

Organizationally, the book shifts between thematic chapters that describe social, economic, and cultural change, and "country" chapters emphasizing developments within specific areas. Enhanced by scores of illustrations, The Emergence of Modern Southeast Asia will establish a new standard for the history of this dynamic and radically transformed region of the world.

This is the best introductory text on Southeast Asian history that this reviewer had come across in many years. . . . The book itself is the embodiment of ‘unity in diversity’, the leitmotif of Southeast Asia. ― Contemporary Southeast Asia

By far the best survey of modern Southeast Asian history available. It is a work that should be on the shelf of every scholar and educated layperson interested in Southeast Asia, as its detail and readability make it an ideal reference work. ― Journal of Southeast Asian Studies

This work represents a substantial step forward for a collaborative project now forty years in the making. . . . No other textbook on Southeast Asia comes even close to it for its detail and coverage of historical themes and events. ― Itinerario

An attractive, accessible, and authoritative modern history." ―Royal Society for Asian Affairs,"A significant update to the eminently successful In Search of Southeast Asia of almost four decades ago. . . . Highly recommended. Useful as a textbook and for reading at all levels. ― Choice

A valuable study for exploring the region’s history. . . . The Emergence of Modern Southeast Asia offers discomforting food for thought. ― IIAS Newsletter --This text refers to the paperback edition.

Norman G. Owen is professor of history at the University of Hong Kong. --This text refers to the paperback edition.

XINYI
5.0 out of 5 stars Five Stars
Reviewed in the United States on April 24, 2016
Verified Purchase
Good quality! I like the notes on it!
Read more
Helpful
Report abuse

Kaze
4.0 out of 5 stars a very good textbook
Reviewed in the United States on March 9, 2014
Verified Purchase
It's good to have this book. It provides you with a general view of southeast asia--how its history is and what makes it today.
Read more
Helpful
Report abuse

Mary Ann Lamovsky
5.0 out of 5 stars textbook
Reviewed in the United States on March 3, 2014
Verified Purchase
What can you say about a textbook? I will say that if you are sure of the book you need (publisher,edition etc.) this is the best way to order books for school.
Read more
Helpful
Report abuse