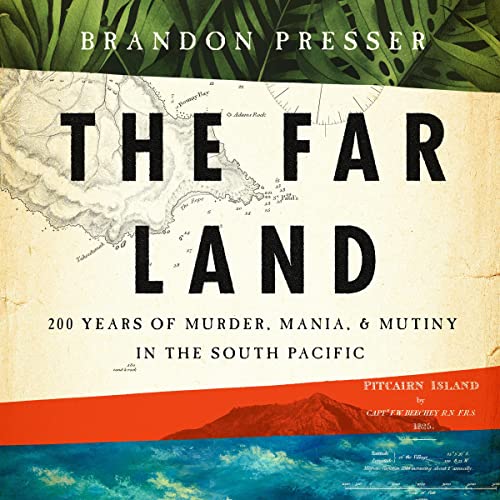 The Far Land: 200 Years of Murder, Mania, and Mutiny in the South Pacific

A thrilling true tale of power, obsession, and betrayal at the edge of the world.

In 1808, an American merchant ship happened upon an uncharted island in the South Pacific and unwittingly solved the biggest nautical mystery of the era: the whereabouts of a band of fugitives who, after seizing their vessel, had disappeared into the night with their Tahitian companions.

Pitcairn Island was the perfect hideaway from British authorities, but after nearly two decades of isolation, its secret society had devolved into a tribalistic hellscape; a real-life Lord of the Flies, rife with depravity and deception.

Seven generations later, the island’s diabolical past still looms over its 48 residents; descendants of the original mutineers, marooned like modern castaways. Only a rusty cargo ship connects Pitcairn with the rest of the world, just four times a year.

In 2018, Brandon Presser rode the freighter to live among its present-day families; two clans bound by circumstance and secrets. While on the island, he pieced together Pitcairn’s full story: an operatic saga that holds all who have visited in its mortal clutch - even the author.

Told through vivid historical and personal narrative, The Far Land goes beyond the infamous mutiny on the Bounty, offering an unprecedented glimpse at life on the fringes of civilization, and how, perhaps, it’s not so different from our own.

PLEASE NOTE: When you purchase this title, the accompanying PDF will be available in your Audible Library along with the audio.

Your audiobook is waiting!
Learn more about membership
List Price: $29.65
You Save: $3.71 (13%)
By completing your purchase, you agree to Audible’s Conditions Of Use
Sold and delivered by Audible, an Amazon company
Share

misterbustercat
5.0 out of 5 stars Amazing piece of research and story telling!
Reviewed in the United States 🇺🇸 on September 23, 2022
Verified Purchase
There’s nothing to dislike about this book. Brandon Presser uses a split time narrative, the people involved in the Mutiny and henceforth some who become Pitcairners. He also includes his personal experience gathering information for the story and his time spent traveling to and staying on Pitcairn with its current descendants and culture. The narrative is spellbinding and the remoteness of Pitcairn takes on a life of it’s own.
Read more
Helpful
Report abuse

Ken Kardash
4.0 out of 5 stars a tiny island with a long shadow
Reviewed in the United States 🇺🇸 on March 14, 2022
Verified Purchase
I bought this book based on an excerpt in my national newspaper, the Globe and Mail. My review probably has a positive bias because the author is a fellow Canadian, but there is no other conflict of interest.

I had a slight misperception of the book’s subject based on the excerpt and title. I thought it was meant to be a more metaphorical exploration of the idea of a Lost Paradise as represented in modern Western images of the South Pacific. Instead, it is an immersive, journalistic take on the already well-known story of the HMS Bounty and the fate of its mutineers on an isolated island. Even if you are already familiar with the classic trilogy of novels by Nordhoff and Hall, the story remains timelessly fascinating in this modern retelling. Presser, a travel writer, unleashes the eye and ear of a novelist in recreating the scenes and dialogue of the events based on meticulous research. It reads like the real-life inspiration for the Survivor television show, dating back two hundred years. The generational aftermath is also intriguing, including the revelation that Pitcairn was not the only island to be colonized by the descendents of the mutineers!
Read more
3 people found this helpful
Helpful
Report abuse

B. Taff
4.0 out of 5 stars Had higher hopes.
Reviewed in the United States 🇺🇸 on August 25, 2022
Verified Purchase
Just a sad tale of Pitcairn of the past and today. Quite depressing book.
Read more
Helpful
Report abuse

Louis J. Cap
4.0 out of 5 stars An Interesting Read
Reviewed in the United States 🇺🇸 on July 16, 2022
Verified Purchase
Told in flashbacks and current time, alternating by chapter, this is the story of the island that the mutineers of the Bounty chose as their home. Presser does a good job telling its story, and I enjoyed reading about the island’s history.
Read more
Helpful
Report abuse

Kohala Bandit
4.0 out of 5 stars Pitcairn Revisited
Reviewed in the United States 🇺🇸 on June 10, 2022
Verified Purchase
We visited Pitcairn in 2004 and managed to get ashore just before “ The Trial” and have followed this fascinating island story for years. Presser has put together a collection of facts and conjecture that make compelling reading but we may never know all of the details of the intrigues , violence and murders among this small group. Definitely worth reading and the connection to those on Norfolk Island is an important link.
Read more
One person found this helpful
Helpful
Report abuse

vincent wamsley
4.0 out of 5 stars Excellent
Reviewed in the United States 🇺🇸 on July 29, 2022
Verified Purchase
Best book about Pitcairn I have ever read.
Read more
Helpful
Report abuse

Enrique Fernandez
5.0 out of 5 stars Thrilling ride to the edge of the world
Reviewed in the United States 🇺🇸 on April 18, 2022
Verified Purchase
I couldn't put this book down. It's about a nearly unreachable island in the South Pacific inhabited by the descendants of the Mutiny on the Bounty saga. Author Brandon Presser is one of the few people in the world who has gotten to visit. Anyone who likes to travel - armchair or otherwise - will be swept away by this vicarious read, courtesy of the brilliant writer Brandon Presser. The title of the first chapter, "Turn on the Quiet," cued a book full of beautiful expressions and rich, vibrant storytelling. His deep historical research did on the Bounty saga dovetails with the community he finds on the island now. I can't stop talking about this book. I have a copy to my brother, who is too busy to read very much, but it reminds me of our late brother, who loved that part of the world. His family reported the next day that he couldn't put it down, and they have never seen him read that much.

Kathryn Martin
5.0 out of 5 stars One of a kind!
Reviewed in the United States 🇺🇸 on March 9, 2022
Verified Purchase
The Far Land is a one-of-a-kind literary experience. Part travelogue, part historical thriller, it will grab you from the first page and keep you spellbound until its bloody end. The story is about Pitcairn, the most remote island in the world, and in reading it you feel yourself marooned at the end of the world with the author. Presser goes back and forth between present day Pitcairn (population 48) and the history of its settlement by the sailors from the Mutiny on the Bounty and their Tahitian brides. I found myself constantly wanting to talk to my husband about the bizarre and sinister events surrounding the establishment of the island, but not knowing where to even begin. The drama begins with Captain William Bligh and Fletcher Christian and continues up to the modern day islanders, who have encountered their fair share of scandal. You can’t decide who to root for. You can’t decide if you want to visit Pitcairn or if it inspires terror. Honestly, I’ve never read a book like this one. I can’t recommend The Far Land highly enough for fans of history or adventure, or for anyone who just needs a good escape.
Read more
10 people found this helpful
Helpful
Report abuse
See all reviews

Captain Bligh
3.0 out of 5 stars Missed opportunity
Reviewed in the United Kingdom 🇬🇧 on May 7, 2022
Verified Purchase
Much to my disappointment, this book failed to live up to expectations. There is too much focus on a admittedly clever reimagining of the well-known story of the Bounty mutiny and not enough about the author’s time on the island. Although he hints at some of the dark undercurrents at play on the island, he fails to properly capture the strained inter (and intra) family rivalries and petty squabbles that overshadow everyday life on the island. I was also a little troubled by what I perceived to be his glossing over of the sexual abuse scandal and its ongoing impact. It suits the islanders to shut up shop and deny what happened, but that does the victims a huge disservice. Anyone who has read the trial transcripts cannot fail to realise that what went on could in no way be ascribed to cultural norms. For a far better understanding of Pitcairn Island dynamics I wholeheartedly recommend Kathy Marks’ superior book, ‘Trouble in Paradise’.
Read more
Report abuse
See all reviews