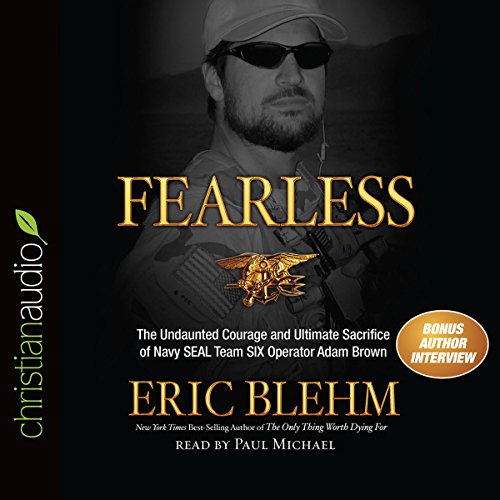 Fearless takes you deep into SEAL Team SIX and straight to the heart of one of its most legendary operators.

When Navy SEAL Adam Brown woke up on March 17, 2010, he didn’t know he would die that night in the Hindu Kush Mountains of Afghanistan - but he was ready: In a letter to his children, not meant to be seen unless the worst happened, he wrote, “I’m not afraid of anything that might happen to me on this earth, because I know no matter what, nothing can take my spirit from me.”

Long before Adam Brown became a member of the elite SEAL Team SIX - the counterterrorism unit that took down Osama bin Laden - he was a fun-loving country boy from Hot Springs, Arkansas, whose greatest goal had been to wear his high school’s football jersey. An undersized daredevil, prone to jumping off roofs into trees and off bridges into lakes, Adam was a kid who broke his own bones but would never break a promise to his parents.

But after high school, Adam fell in with the wrong crowd, and his family watched as his appetite for risk dragged him into a downward spiral that eventually landed him in jail. Battling his inner demons on a last-chance road to redemption, Adam had one goal: to become the best of the best - a US Navy SEAL.

An absorbing chronicle of heroism and humanity, Fearless presents an indelible portrait of a highly trained warrior who would enter a village with weapons in hand to hunt terrorists, only to come back the next day with an armload of shoes and meals for local children. It is a deeply personal, revealing glimpse inside the SEAL Team SIX brotherhood that also shows how these elite operators live out the rest of their lives, away from danger, as husbands, fathers and friends.

Fearless is the story of a man of extremes, whose courage and determination was fueled by faith, family, and the love of a woman. It’s about a man who waged a war against his own worst impulses and persevered to reach the top tier of the US military. Always the first to volunteer for the most dangerous assignments, Adam’s final act of bravery led to the ultimate sacrifice.

Adam Brown was a devoted man who was an unlikely hero but a true warrior, described by all who knew him as fearless.

Your audiobook is waiting!
Learn more about membership
List Price: $24.95
You Save: $3.12 (13%)
By completing your purchase, you agree to Audible’s Conditions Of Use
Sold and delivered by Audible, an Amazon company

Amazon Customer
2.0 out of 5 stars Good book - poor quality printing
Reviewed in the United States on July 13, 2019
Falling apart as soon as I started to read!Great book just wish it would’ve stayed together so my kids could read
Images in this review

theratman
5.0 out of 5 stars a very engaging book about a true hero
Reviewed in the United States on January 23, 2019
Verified Purchase
Funny thing: at first I did not like this book, finding Aaron Brown's drug addiction not that appealing. But I kept reading and after 50 pages could not put it down. Here is a man who battled his own demons for years, but yet managed to train himself to become a Navy SEAL which only around .01 percent of males could do. And yet he did it despite overcoming all manner of serious injuries: broken arms, legs, fingers, even losing an eye (an eye!) in a training accident and yet he managed to become a sniper despite these severe handicaps. And as anyone who has read either Chris Kyle or Brandon Webb, there is no more challenging calling in our armed forces that becoming a Navy SEAL sniper requiring not only unreal physical and mental stamina but also tremendous intellectual capacity as well. And Aaron Brown was one of those rare men-who also wore BatMan underwear into battle! How cool is that? He was also a devoted father to his children and a great husband to his wife, who is also one of the heroines of our time

He died doing what he most loved-saving his brother soldiers-and America is the luckier for having troopers such as Aaron Brown in their midst. Get this book and read it!

Barbazun
5.0 out of 5 stars Great Book about a Great Hero
Reviewed in the United States on January 5, 2019
Verified Purchase
This book is inspiring and really made me feel proud to be an American, and a U.S. Navy Sailor.

Adam’s story of triumph and patriotism is unmatched. I am so thankful that we have men and women that answer the call to protect our country. And few are as special as Adam Brown.

Considering Adam’s family, especially his wife and children, I want to say that they serve as well. I have spent a lot of time away from my wife and kids as a result of my service. Although, I’m never in harms way like a SEAL. But it’s easy to forget those who are left at home. This book helped show the importance of the family that a service member leaves at home. That was, surprisingly, one of my favorite things about this book - that it highlights the struggles of a mother and her children while daddy is away fighting for their freedom. It’s beautiful and tragic at the same time.

Adam’s faith renewed my own. I have been a Christian for many years, but my duties as a Sailor have consumed so much of me that I get off track. This book helped show me that a man can serve both the country and the Lord.

Today, I will kiss my wife a little longer. I will hug my kids a little tighter. And I will pray a little deeper. All because of one man who showed me, in his sacrifice, that I can play my role for America and be a family man that loves Jesus, at the same time.

Melvin Frisbey
5.0 out of 5 stars Incredible Story
Reviewed in the United States on April 24, 2020
Verified Purchase
Just finished reading Fearless. One of the best books I've ever read and I've read a lot over the years, including Eric's book about Green Berets in Afghanistan, and another about a Green Beret in Viet Nam.

A wonderful tribute to a great man and his family, to a great love story, and to the awesome men he served with.

It left me feeling pretty unaccomplished compared with everything he did. And I was a Green Beret in VN and have lived a full life.

Thank you, Eric, for telling Adam Brown's story. And thanks to his wife, family, and team mates for their openness in making the story complete.

And thank you for not leaving God out.

Gary Kolesar
5.0 out of 5 stars GOD'S AMAZING GRACE EMBRACED & ACCEPTED BY ADAM BROWN
Reviewed in the United States on November 27, 2018
Verified Purchase
Adam's life parallels that of all people on this earth. Life is tough for everyone. But we can all become fearless when facing any challenges even those leading to death by grabbing hold of the life preserver He always has ready for us. It has the name GRACE stenciled on it, and will help you float above this world. You will then, like ADAM BROWN, be in this world but not of this world . But only Jesus Christ was knows the way because his Father is GOD who alone has the map through the minefields of this life. I am 74 and know how quickly life on earth passes and I know I will be with my loved ones in the "Blink of an eye."
Read more
21 people found this helpful
Helpful
Report abuse

Sherry Cox
5.0 out of 5 stars Never Give Up
Reviewed in the United States on September 13, 2019
Verified Purchase
Never Give Up
A person should never give up, no matter what the circumstances. Fearless by Eric Blehm is a true story about a man named Adam Brown who never gave up. Reading this book has inspired me to always give my best. Adam’s family motto in the book is, “You gotta do what you gotta do, and when you’re done, you’ll be stronger” (12).
Fearless starts out with a young man named Adam who lives in Arkansas. He was always small, but he never let that stop him from doing something no matter what it was. He found some things that messed up his life, but he would soon find that they actually help his journey through life. He joined the Navy and became a Seal overcoming all odds. He had done more than proven himself worthy. Adam ended up paying the ultimate sacrifice fighting for his country.
Personally, I liked the writing story of Eric Blehm and the detail he brought into the book by giving information about Adam’s daily life and where he grew up and lived later in life. Eric put some very small details in the book, but not so much that they made the story boring. I was always wondering what would happen next and it really grabbed my attention throughout the book. His choice of words and sentence structure flowed really well and the book never once got boring to me. I would definitely read another book from Eric Blehm.
This novel exceeded my expectations and really captured my attention. It is easy to tell that Eric Blehm put in a lot of research and time in this novel. Everything he put in the book actually happened to Adam Brown during his life and even after. The information never had repetition throughout the book. The novel was clean and well written throughout the whole thing.
Eric Blehm’s tone changed throughout the book because there are very different scenarios and stages in Adam Brown’s life. His tone would either be exciting or calm. It would be exciting when Adam was in battle and calm when he was home with his family. The author’s tone helped my reading experience by keeping my attention on the story the whole time. It never got in a rut of the same kind of tone. I believe that most males would find this book appealing and that most people serving in the military would as well.
Read more
11 people found this helpful
Helpful
Report abuse
See all reviews