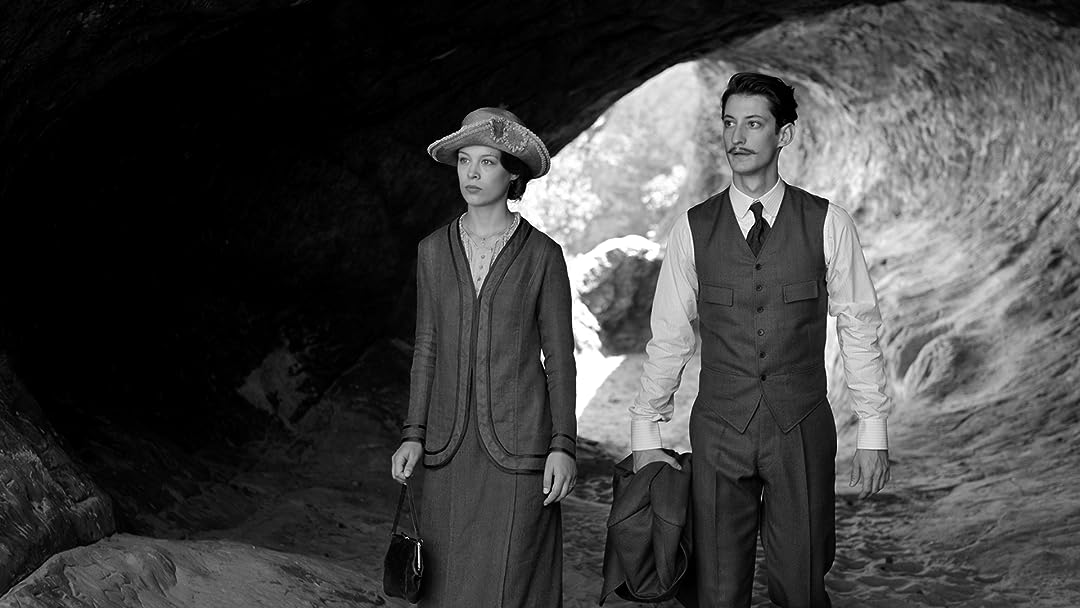 (562)
7.51 h 53 min2017X-RayPG-13
A haunting tale of love and reconciliation begins in a small town in Germany in the aftermath of World War I when a young woman mourning the death of her fiancé encounters a mysterious Frenchman laying flowers on her beloved's grave. Includes English subtitles-user may need to turn subtitles on.

Rentals include 30 days to start watching this video and 3 days to finish once started.

Nancy LoomisReviewed in the United States on December 2, 2017
5.0 out of 5 stars
Definitely a 5 Star picture!
Verified purchase
I don't give too many 5 star ratings, but this beautiful piece of cinema deserves it and you won' even mind the subtitles. It was a sweet and bittersweet love story, set in post ww1 Germany & France. But so much deeper and broader than just romance and heartbreak, with themes of moving on with life after great loss and most importantly, forgiveness, which is what allows one to do the moving on. The story also offers some mystery and haunting elements that add great effect and effectiveness to the plot. Nothing is gratuitous here and the acting is spot-on.

The black & white cinematography left nothing to be desired and was as visually rich as any film in color. The music was touching, tender and classically romantic with background pieces that included Tchaikovsky and Chopin and spoke to the heartbreak and loss of the characters in this fine film. Highly recommended. And have at least one tissue at the ready at the end. Highly recommended!

John P. Jones IIIReviewed in the United States on December 2, 2019
5.0 out of 5 stars
L’homme que j’ai tué…
Verified purchase
The changing face of warfare. As in, we have found it so much more convenient to kill at a distance. Consider that for thousands of years of warfare, the soldier who killed another actually saw, or could see, the face of the opponent that he killed. True of the Roman Legions, as well as the British squares at Waterloo. As late as the American Civil War, almost certainly at least 50% of those killed in battle were in such a range that they could see the faces of their opponents (though I have never once seen any historian hazard an estimate). By the time of the “Great War,” that is, World War I, the percentage probably dropped below 50%. Norman Lewis, during his travels in French Indochina, in the early ‘50’s, observed in his work, “A Dragon Apparent”: “What an aid to untroubled killing is the airplane.”

In subsequent wars the percentage has continued to drop, so that killing an opponent, face-to-face, is almost an anomaly. Tim O’Brien has one short story of eight pages, in his best-selling collection, “The Things They Carried,” entitled “The Man that I Killed,” which is the English translation of the subject line. One American, one Vietnamese, on a trail, and it is who is quickest on the draw, like in the American Westerners. I still recall O’Brien’s description of the star-burst of blood soaking the Vietnamese teen-ager’s shirt. Did it actually happen in O’Brien’s case? I’ve never seen him specifically address the truth of that story. However, I have little doubt that former American First Lieutenant Homer Steedly, Jr. “outdrew” former medical corpsman of the PAVN, Hoang Ngoc Dam. They met for only fleeting seconds on a trail high on the hill overlooking the Mang Yang pass, in Vietnam’s Central Highlands. This meeting, the aftermath, and the subsequent reconciliation were told well by Wayne Karlin in “Wandering Souls.”

“L’homme que j’ai tué” is the title to a 1930 play by Maurice Rostand, which inspired a 1932 movie “Broken Lullaby” which starred Lionel Barrymore. Director Francois Orlon, who released “Frantz” in 2017, credits “Broken Lullaby” as the inspiration for his work, but does not mention the original French play. This is a “children of Charlemagne” version of two men on the trail, which is actually a trench; one is a Frenchman, Adrien Rivoire, and the other German, Frantz Hoffmeister, who is the one outdrawn. Less than two months left; the date is 15 September 1918.

The movie commences in 1919 in the village of Quedlinburg in western Saxony-Anhalt. Anna (Paula Beer) grieves for her late fiancé Frantz, and tends his grave. In the process, she notices a stranger, Adrien, played by Pierre Niney, is also laying flowers on Frantz’ grave.

“In war, truth is the first casualty,” as Aeschylus famously proclaimed. So too of the aftermath. Think what you would do if you met the parents of a soldier who had been killed. You knew the true circumstances; wouldn’t you alter the circumstances if they were not very pretty ---- and might they not suspect that you did? Ah, there are numerous levels of lies and deceptions in this movie, all rooted in the best of intentions. Frantz’ father is a physician. Frantz was his only son. He refuses to treat Adrien, because: “Every Frenchman is my son’s murderer.” He would evolve though, beautifully, and eventually tell his fellow German friends and fathers of dead soldiers, brooding in their lost: “We the fathers killed our sons – did we not encourage them to go to war?”

Frantz’s favorite poet was Verlaine. Anna’s favorite was Rilke. They both knew French well, and would write to each other in that language, which underscored the tangled webs the “children of Charlemagne” wove before the Great War. At one point, “logically,” the movie should have been over, but it was only half way there. For Anna would go to France, specifically to Saulieu, in Bourgogne. One of the many strengths of this movie is the treatment of the opposing side in each other’s country after the war. It was aching, and resonated.

In 1994 I met some friends who had been in Vietnam during the American War there. Through serendipity, we were escorted by a Vietnamese guide from the Ministry of Information. We went to see some Champa monuments in the mountains to the west of Danang. It was the matter-of-fact, flat tone in the guide’s voice that still haunts, when she said: “If you had come here in 1977, these villagers would have killed you, because they had suffered so from B-52 bombing.”

Anna, Adrien and Frantz, so star-crossed, so soon after the Great War, bearing the face of battle, dealing with animosities that ran so deep they would have to do it again. Truly a great movie. 6-stars.

I started not to watch it but due to reviews I went ahead and did it. No regrets in that, just a more openness about our human struggles. This may have truly been someone's true life story. We never know, as so many were loss to war, greed and hatred. Very good. True to reality which I like.
24 people found this helpful

amsmithsonReviewed in the United States on March 15, 2022
5.0 out of 5 stars
Beautiful Movie
Verified purchase
I'm not going to leave a very lengthy review since a lot of other people have already verbalized how beautiful this movie was so I won't repeat it.

What I will say is that two days after I watched this film, I can't stop thinking about it. I loved the way it was filmed and the story is heartbreakingly gorgeous. We need to see stories like this because life isn't perfect, and those stories are so relatable.

I seriously loved this film and will definitely watch it again, after my brain and heart have some time to finish processing the first viewing.
4 people found this helpful

Russell SReviewed in the United States on January 23, 2022
5.0 out of 5 stars
Magnificent, need more stars
Verified purchase
Survivor s guilt, anger at one s losses, the overriding desire for happiness despite everything that has come before, and the longing for sexual, romantic and familial attachments. All of these things are part and parcel of this movie. Still a great sad story. Slow but methodical. Pierre Niney was sensational, He broke my heart, I knew there was more to his story than he was telling, but I was still surprised by it. Very interesting how some times it was in black and white and other times in muted color and still again, full color. I noticed these were mood moments. I always found it odd that those who began WWI were angry at those who defended themselves. There is a Manet painting in it called Le Suizide, the suicide, I hope that it didn't mean what I thought it did. The girl loved her too, goes to Paris to find him. Big recommendations.
2 people found this helpful

LichenReviewed in the United States on July 27, 2018
5.0 out of 5 stars
Astounding, beautiful, moving.
Verified purchase
I don't give many films five stars. This is perhaps the best film I've seen in a year. Beautiful, intricate, simple, moving, thought-provoking. It sings its way through from beginning to end, keeping the viewer wondering, hoping, sympathizing, wishing. The lead performances are stunning and perfect. I didn't want it to end. And yet, the ending is perfect.

It is from an artsy, technical standpoint, very interesting and creative. Note the costumes - even in black and white they are beautiful. This film's combination of set, costumes, lighting, and quiet softness, takes you back in time the way the best films do. You never want to come back to the present. You want to stay where these characters are, know them, protect them, and watch their futures unfold.
5 people found this helpful

Light SleeperReviewed in the United States on February 3, 2018
5.0 out of 5 stars
LYING TO GET TO THE BIGGER TRUTH
Verified purchase
Great film. The thesis of the film seems to be that we need to lie to ourselves and others in order to break through life's great and inevitable despairs. (I especially enjoyed the part where the priest encourages her to continue lying to her surrogate parents during confession. ;)

This film looks and feels like a film made in the early 60s -- timeless, really. I would compare it to the 2013 film Ida by Paweł Pawlikowski in that both films seem to, by ignoring contemporary references and attitudes, ask us to check our 21st century cynicism at the door and observe characters in situations who respond to life's challenges with sensitivity, decency, humility, and honest, deeply felt emotions -- if not always honestly representing truths objectively.

Hope to see more films like these.
6 people found this helpful

Carey B.Reviewed in the United States on December 19, 2017
5.0 out of 5 stars
this film made my heart soar, then sink, and then soar again
Verified purchase
outstanding! so much beauty, alongside so much pain and anguish.

the use of color sparsely throughout was probably the most special and most touching component. it aided the film's ability to make my heart soar, and then sink, and then soar again.
at first, i doubted my ability to suspend disbelief around the time period ... but it was so well done, every detail thought through, that within a matter of minutes it was as if i myself was living in that village, nearly 100 years ago.

this film - as well as the feeling i'm left with now - makes *me* want to live.
10 people found this helpful
See all reviews
Back to top
Get to Know Us
Make Money with Us
Amazon Payment Products
Let Us Help You
EnglishChoose a language for shopping. United StatesChoose a country/region for shopping.
© 1996-2022, Amazon.com, Inc. or its affiliates