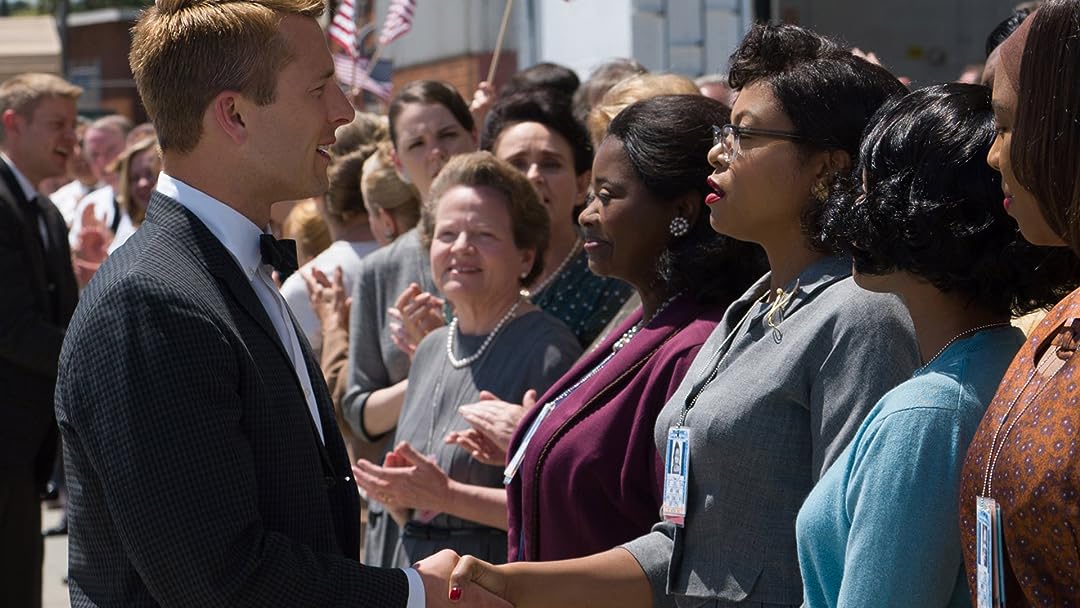 (34,375)
2 h 6 min2016X-RayHDRUHDPG
An incredible & inspiring untold true story about three women at NASA who were instrumental in one of history’s greatest operations – the launch of astronaut John Glenn into orbit.

Playing the video isn't supported on this device/operating system version. Please update or watch on Kindle Fire, mobile devices, game consoles, or other compatible devices.
Add to
Watchlist
By ordering or viewing, you agree to our Terms. Sold by Amazon.com Services LLC.
Write review

ScubafiendReviewed in the United States on April 21, 2017
5.0 out of 5 stars
Did we watch the same film???
Verified purchase
I always read the 1 and 2 star reviews just to see what people's take is on a film. I seriously wonder if the individuals giving this film 1 or 2 stars actually watched the same film! I'm guessing that most if not all are written by people too young to have experienced even the tail end of race relations in the US in the 60s and 70s, and are applying that filter to their opinion. Do you think they made it up about the separate drinking fountains, rest rooms, and back of the bus??? Unfortunately, No. Is it so difficult to believe ANY woman would have had the brains and abilities to so what these women did? But I digress.

The film was well written, directed, and acted. It was great to see the original footage of liftoff used in the film. I was glad to see the update at the end of the film, telling just a little more about the history of these brilliant women after the time period of the film. These were real women who clearly had a groundbreaking impact on many aspects of our country. I think it is a fitting tribute to amazing women at an exciting and difficult time in our history.

ThriftyEngineerReviewed in the United States on April 24, 2017
5.0 out of 5 stars
Awe inspiring and inspirational
Verified purchase
Excellent. I am a female engineer and I recall the day I realized in a class of 250 statics students that I was the ONLY female, in 1991. I left class in tears because no one had warned me that I could literally be the only girl in the entire engineering program entering that year. i had to walk all the way across the engineering building to the only ladies restroom in that building when I needed to go. I went to my advisor, who was a nice German man, but very linear. He asked me if I had a problem with the lecture or the material. I was sobbing and answering of course not. and he told me to run along now and it would all turn out fine. Today I work for a major aerospace engineering company and it is indeed all fine...but I never went through even a fraction of what these ladies faced in the initial days of the space program. I am forever in their debt. I will forever respect ALL of the women of color and those who were not of color, because without them paving the way, today I would still be unable to often be the only female engineer in the room. Luckily, I'm not ALWAYS the only female engineer in the room. I pray this movie will inspire the next generation of lady engineers because this society is in dire need of our technical voices at this time.
493 people found this helpful

This is a story about the unsung heroines who helped calculate the orbits for the space program. We always see the astronauts and mission control, so it was refreshing to see a story behind the trenches. Not only that, but these women were brilliant at a time when women and especially black women didn't do math or science (or full time jobs!). I had no clue these women even existed and am rather ticked that they are only now getting widespread recognition. This is such an inspiring story for any young women looking to break into science, math, computer or engineering fields.

The acting was excellent and there was plenty of humor sprinkled around. There was a mix of old footage to supplement the new to give a well rounded look at what went on during the time of the launches. Anyone else bite their nails even though we know John Glenn made it ok? lol!

Although there was some uncomfortable racist/sexist stuff these women had to slog through, it was more of the subtle type which can be harder to deal with than in your face stuff. I liked how the people changed when confronted directly. I especially loved the 'this is the way it is' entrenched mentality that both whites and blacks had to overcome. It gave a mild yet realistic portrayal of the obstacles these ladies had to deal with in addition to their work and made me respect them even more.

I totally recommend this for anyone interested in the space program and science stuff.

Michael GriswoldReviewed in the United States on May 14, 2017
5.0 out of 5 stars
Hidden in More Ways Than One
Verified purchase
Viewers should not be scared off by the two hour plus running time because watching Hidden Figures does not feel like two hours. I felt like I had just sat down and then it was over. Have not felt like that watching a movie in a long time. Hidden Figures is actually two concurrent stories wrapped into one. First, NASA needs the best minds around to win the space race over the Soviets, so you have the chaos of the space race. Enter these three black woman who are unquestionably smart and work hard at what they do. But the problem is that this is early 1960’s Virginia where woman do not have jobs as computer programmers and mathematicians. They also have another strike against them in that they are black in a world that remains largely segregated.

This is the world that these three woman had to butt up against confronting both institutional and social prejudice, tradition bound gender roles, and outright racism. But it’s not a downer movie, it comes across as really uplifting and positive as it shows the values of love of friendship that these ladies have for each other, which is a far cry from tear down fests we usually see on the small screen.

It’s so powerfully acted and told that those two hours will just fly away.
137 people found this helpful

KLKReviewed in the United States on June 18, 2022
1.0 out of 5 stars
Too fictional.
Verified purchase
I don't like fictional movies based loosely on 'real' events. There was SO much conflation between 1950's Jim Crow south and late 60's NASA efforts. I'd have much preferred a movie based on real events. I had family that ran departments of NASA during the landing on the moon and I traveled there and saw first-hand the atmosphere during subsequent Apollo missions.

This movie was utterly insulting to the men and women who were collectively responsible for that incredible success. It was so over the top that it became cartoonish almost. This movie would have you believe these three women launched our rockets and landed the first man on the moon. I'm surprised they didn't attribute Martin Luther King Jr. quotes to these women as well. These women did arithmetic for NASA. A great opportunity, but not Earth shattering. Much of their work was checking and confirming other human computations. Let's not destroy history for a feel-good movie. It serves no one and only does damage IMHO.
12 people found this helpful

Kindle CustomerReviewed in the United States on May 9, 2017
5.0 out of 5 stars
in the classroom
Verified purchase
We were able to get parental consent to view this in the 5th grade classroom. I developed a unit integrating this film with social studies and reading after study of both Civil Rights and the Space Race/Cold War at the end of the school year. Using articles from Newsela and Smithsonian, we explored comprehension questions to compare different texts about the same topic. We used the film as another 21st century text in conjunction with the Young Readers' edition of the book by Shetterly. We paused the film a few times to discuss context. At the end of the film, I had a whiteboard full of students solving math equations. Next year, I might tie in math and science/engineering, too, and incorporate all of the subjects within the unit.
54 people found this helpful

Wende13Reviewed in the United States on April 1, 2017
5.0 out of 5 stars
Amazing Loved it!
Verified purchase
What an incredible movie! What a true shame that I am only learning about all this in 2017! These women's stories should have been told decades ago.
248 people found this helpful

Gaylynn L. BrenoelReviewed in the United States on May 31, 2022
3.0 out of 5 stars
Great movie but not totally true!
Verified purchase
I loved the movie and the acting! I bought the book to further my knowledge of those incredible women and was very disappointed to find out how much was fictional in the movie. Katherine’s supervisor played by Parsons was totally fictional. Kevin Costner’s character was totally fictional. There was never a situation when the “colored” bathroom sign was torn down. Katherine did not have to run 1/2 mile to use a bathroom. She used the one at her work center without incident. There was no issue with the coffee pot. The work environment at NASA was not the racist workplace portrayed. Many of the actual supervisors and managers encouraged the “Black” women to further their degrees and become engineers. Yes, discrimination existed and it was unfair but not to the degree portrayed in the movie. The part about John Glenn was true and demonstrated that there were and are “white” people who recognize talent based on talent and not based on race. If the movie had been more fact-based it would not have created the emotional response it received! However, I am grateful to finally know about this amazing and talented women. Their contributions need to be included in our history books along with their actual struggles of unequal treatment during that time in our Country. It is important to know the truth but be careful to believe anything presented as “the truth” from Hollywood.
4 people found this helpful
See all reviews
Back to top
Get to Know Us
Make Money with Us
Amazon Payment Products
Let Us Help You
EnglishChoose a language for shopping. United StatesChoose a country/region for shopping.
© 1996-2022, Amazon.com, Inc. or its affiliates