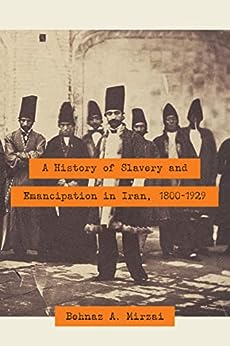 A History of Slavery and Emancipation in Iran, 1800–1929 Kindle Edition

by Behnaz A. Mirzai (Author) Format: Kindle Edition
See all formats and editions
Sorry, there was a problem loading this page. Try again.

The first history of slavery in this key Middle Eastern country and how it shaped the nation’s unique character.

Slavery in the Middle East is a growing field of study, but the history of slavery in a key country, Iran, has never before been written. This history extends to Africa in the west and India in the east, to Russia and Turkmenistan in the north, and to the Arab states in the south. As the slave trade between Iran and these regions shifted over time, it transformed the nation and helped forge its unique culture and identity. Thus, a history of Iranian slavery is crucial to understanding the character of the modern nation.

Drawing on extensive archival research in Iran, Tanzania, England, and France, as well as fieldwork and interviews in Iran, Behnaz A. Mirzai offers the first history of slavery in modern Iran from the early nineteenth century to emancipation in the mid-twentieth century. She investigates how foreign military incursion, frontier insecurity, political instability, and economic crisis altered the patterns of enslavement, as well as the ethnicity of the slaves themselves. Mirzai’s interdisciplinary analysis illuminates the complex issues surrounding the history of the slave trade and the process of emancipation in Iran, while also giving voice to social groups that have never been studied: enslaved Africans and Iranians. Her research builds a clear case that the trade in slaves was inexorably linked to the authority of the state. During periods of greater decentralization, slave trading increased, while periods of greater governmental autonomy saw more freedom and peace.

“This is a major contribution to the study of enslavement in Iran, which will doubtlessly become a must-read for any future studies of Middle Eastern and Islamic enslavement and abolition, as well as for any work on Iranian history in general.” —Ehud R. Toledano, Tel Aviv University, author of As If Silent and Absent: Bonds of Enslavement in the Islamic Middle East

“While this book will be revelatory to scholars of Iran, it also promises to engage with theoretical trends in the study of slavery elsewhere. It frames many research questions broadly to engage with scholars of slavery in other Muslim lands, as well as slavery elsewhere.” —Kamran Scot Aghaie, University of Texas at Austin, coeditor of Rethinking Iranian Nationalism and Modernity
Read more
Previous page
Next page

"" --This text refers to an alternate kindle_edition edition.

While this book will be revelatory to scholars of Iran, it also promises to engage with theoretical trends in the study of slavery elsewhere. It frames many research questions broadly to engage with scholars of slavery in other Muslim lands, as well as slavery elsewhere. -- Kamran Scot Aghaie, University of Texas at Austin, coeditor of Rethinking Iranian Nationalism and Modernity --This text refers to an alternate kindle_edition edition.

Behnaz A. Mirzai is an associate professor of Middle Eastern history at Brock University in Canada. She is a co-coordinator and member of the preparatory committee for the Slave Trade Route project, UNESCO, and the founder of the website Brock/UNESCO Project for the Study of the Slave Trade and Slavery in the Mediterranean, Middle East, and Indian Ocean. --This text refers to an alternate kindle_edition edition.
Read more

Anthony A. Lee
4.0 out of 5 stars Unique book on African slaves in Iran
Reviewed in the United States 🇺🇸 on July 31, 2017
Verified Purchase
An excellent summary of the current state of scholarship on the history of African slaves in Iran. This is a groundbreaking book, calling upon an impressive number of sources. The inclusion of a good number of photographs is also welcome.
Read more
3 people found this helpful
Helpful
Report abuse
See all reviews
Report an issue
Does this item contain inappropriate content?
Report
Do you believe that this item violates a copyright?
Report
Does this item contain quality or formatting issues?
Report