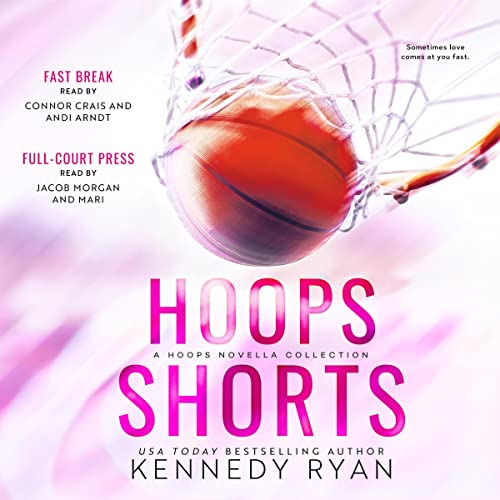 MacKenzie Decker was a question Avery never got to ask, much less an answer. They met when she was a young reporter fueled by ambition, and the ink on Deck's first NBA contract was barely dry. Years later, they've climbed so high and lost so much, but one thing hasn't changed—the attraction that simmered between them in a locker room before is still there. With success like theirs, everything has been possible...except them. But that was then.

The only question is...what about now?

Quinn was a world-class runner once.

My dreams had wings spun from wind and speed. Every time out of the blocks was a glorious flight. But then, I crashed and burned. When I lost my leg, I thought it was the finish line. Little did I know life was just beginning. Now they call me “America’s titanium sweetheart.” (What can I say? It tested well. LOL) The life I thought was over is moving so fast. I have my own gym, a fitness app, a clothing line, and an endless trail of endorsements. One thing there’s never time for? Love. One thing I don’t have time for? Games. Come real, or don’t come at all. In a field full of players, I’m looking for a real one. Otherwise, I won’t stop.

I wanted to be like Mike, jump like magic and soar like Dr. J. But a college injury grounded me. What I thought was game over, actually opened up a whole new world. Fast forward to now, I’m coaching some of the NBA’s best. They call me "the machine" because I’m obsessed with stats and data, and my near-photographic memory means I remember every play. I see the court clearly. But I never saw her coming. Quinn Barrow stops me in my tracks. Pursuing my first championship, there’s been no time for love. I’m more than willing to chase her, but will she slow down long enough to be caught?

Your audiobook is waiting!
Learn more about membership
List Price: $19.95
You Save: $1.96 (10%)
By completing your purchase, you agree to Audible’s Conditions Of Use
Sold and delivered by Audible, an Amazon company
Share

Jazzy Belle
5.0 out of 5 stars Must Read Romances!!
Reviewed in the United States 🇺🇸 on July 29, 2022
Verified Purchase
I’m amazed at the powerful punches these two novellas packed. Per usual, Kennedy Ryan delivered!

Full-Court Press
“I don’t look at Avery like she’s dessert, I look at her like she’s the main course.”

From the moment they met via Deck only in a towel, I could feel the chemistry then. The attraction was palpable. But, time wasn’t on their side. Years later, Avery and Deck discover those feelings haven’t went away. Deck was ready to go all in. Understandably, Avery had hesitance in starting a new relationship but Deck was patient. I loved his willingness to wait and the way he truly cared for Avery and wanted more than a fling. Avery was full of grit and determination, you couldn’t help being inspired. Their story was emotional, sexy sweet and one you won’t want to end. And wow, just when you thought it couldn’t get better, you have Jacob Morgan and Mari narrating and they did a phenomenal job. They brought out all the emotions for a story you truly felt.

Fast Break
“She turns my head. She speeds my pulse. She makes me want to slow down.”

Ok so I am a full on sucker for the “he falls first”! Ean was a dreamboat. I loved how was tenacious in going for what he wanted. From changing meetings last minute to flying out for a day, he was willing to go whatever it took to prove to Quinn he was the man for her. Quinn though, my gawd she was more than a survivor, she was straight up #goals. It was the resilience for me. Her and Ean’s story hit you right in the feels. It was a sizzling hawt romance that you will devour and have you wishing for more. Conner Crais and Andi Arndt just slayed the narration. They made the perfect Ean and Quinn.
Read more
Helpful
Report abuse

Ebony
5.0 out of 5 stars Just enough
Reviewed in the United States 🇺🇸 on July 2, 2022
Verified Purchase
Ms. Ryan is extremely consistent at what she does. I had read the first short before and it mattered not to my heart, I still felt deeply for Avery.
The first short was about Avery and Deck finally taking a chance on the chemistry between them. When they first meet it was energy and something else between them. Life happens and they move on separately. Ten years later they find themselves with a second chance. Avery is now a big time journalist and Deck is finding his way post amazing NBA career. Their paths cross and that undercurrent of energy still runs between them. Needless to say they struggle with the demands of their careers, but Avery struggles to overcome her past relationship that came to a devastating end. Deck however is so sweet, patient, and understanding as he encourages her to take the time to heal because he wants it all with her. I admired their love because I was tired for them as they found ways to ensure that their relationship worked.
The second short I had not read and it had me boohooing. Quinn was running in the Olympics when her life would forever change. She wakes up and realizes everything she had pushed herself for was no longer possible. She found herself wondering if there was anything to live for. Enters Banner one of my faves from the Hoops' series to help her find a new purpose. That purpose eventually leads to the admiration of Coach Jagger. I mean she had the man enthralled; jumping through hoops like he wasn't an NBA coach with a tight schedule. Fear and self doubt damn near ended them before they got started. Luckily Jag stayed the course and they both got to experience a love neither of them knew was possible.

I gave y'all the sweet version of both stories, but in the midst of all this love there was some firework love making that added all types of spice. Two short reads worth the time. In fact read the ENTIRE Hoops series, I'm telling you, you will not regret it.
Read more
Helpful
Report abuse

Simone Umba
5.0 out of 5 stars Healing Through Love
Reviewed in the United States 🇺🇸 on September 13, 2022
Verified Purchase
The men that Kennedy Ryan writes are amazing and I wish these stories were longer.
Read more
Helpful
Report abuse

ShannonVM
5.0 out of 5 stars Wonderful short stories!
Reviewed in the United States 🇺🇸 on June 23, 2022
Verified Purchase
Full Court Press
Lyrical and poetic- 2 words you wouldn't think to connect with a sports romance, but that's what you get when Kennedy Ryan is the author. If you've read any of her other books just know, even though this is a novella, the writing is everything you've come to expect from her. Avery and Decker's story is a compelling second chance romance that will have leave your heart soaring and asking for more.

Fast Break
Ms. Ryan can sure pack a punch into a limited amount of words. And you know you're going to get some sort of life lesson when you read one of her books, and Fast Break was no different. If you don't come through this story inspired and wanting to do more with yourself, Quinn would be disappointed!
I loved how persistent Ean was with Quinn, without being overly stalkerish. She was leery of falling for his charms, and who could blame her after all she'd been through. But he made sure to show her that he "saw" her, and that was just so swoony and endearing
Read more
2 people found this helpful
Helpful
Report abuse

Warrior Chick
5.0 out of 5 stars 1 old novella, 1 new novella.
Reviewed in the United States 🇺🇸 on July 25, 2022
Verified Purchase
This book is comprised of 1 old novella and 1 new novella, both end at 87%. The rest of the book is the first chapter of Hoops book 1. I’m only going to review the new material.

Written in dual first person POV. Good amount of sexy times for the length of the novella. It tells the story of Jag (August’s coach, Hoops book 1) and Quinn (Banner’s bff, Hoops book 2). It’s quick and mostly lighthearted but there are discussions of Quinn’s suicidal ideation and recovery from amputation. Has a HEA and can be read as a standalone.
Read more
Helpful
Report abuse

Shonte
5.0 out of 5 stars So much in such little time
Reviewed in the United States 🇺🇸 on August 30, 2022
Verified Purchase
I loved these little short stories, they have all the swoon and just enough heat to turn things up a notch
Read more
Helpful
Report abuse

Mary
5.0 out of 5 stars 🔥🔥Sizzle Alert 🔥🔥
Reviewed in the United States 🇺🇸 on July 21, 2022
Verified Purchase
I mean, I was not expecting this much story and emotion from a novella. I was swept up in each story right away and am just so surprised by how quickly I was invested. And if you really must know, the sexy times are smoking hot, like not even joking, combustible!
Read more
Helpful
Report abuse
See all reviews

Ingrid Birch
5.0 out of 5 stars Excellent
Reviewed in Canada 🇨🇦 on July 6, 2022
Verified Purchase
Especially loved the strong women in both stories and the equally strong men that loved them unconditionally no matter the circumstances
Read more
Report abuse
See all reviews