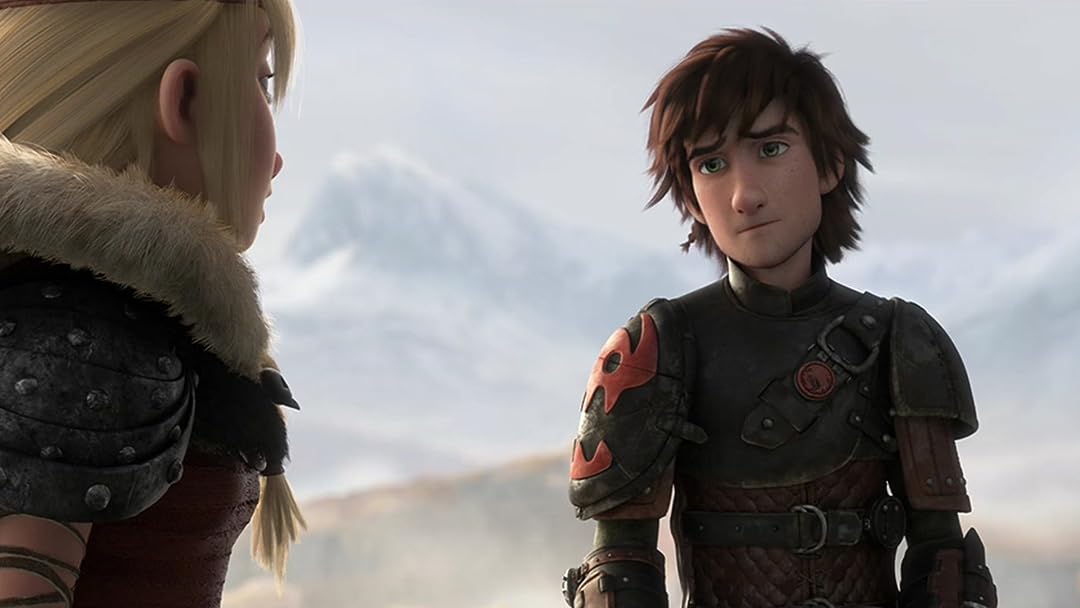 How to Train Your Dragon 2

(20,952)
7.81 h 41 min2014X-RayHDRUHD7+
During one of their high-flying games, Hiccup and Toothless encounter a herd of wild dragons led by a mysterious Dragon Rider and once again, they find themselves fighting to keep the peace in their kingdom.

Trisha YoungmanReviewed in the United States on September 29, 2018
5.0 out of 5 stars
It's like watching a live-action movie
Verified purchase
This has to be one of my favorite movies. DreamWorks really outdid themselves with this installment of their popular "How to Train Your Dragon" series. The musical score is amazing, the animation is incredible, and the scenery is breathtaking. I forget sometimes that I'm watching an animated kid's movie with how on-point the detail is. It has a mixture of comedy, drama, and suspense that keeps even the squirmiest 6-year-old's attention. Set five years after the events of the first movie, "How to Train Your Dragon 2" follows Hiccup and his faithful Night Fury Toothless as they set out in search of new lands, where they stumble across men who are hired by Drago Bloodvist to trap dragons to form a dragon army. After a shocking discovery and a devastating loss, Hiccup and the other riders must race home to rescue their dragons from the alpha's control and take down Drago before his dragon army razes Berk.
21 people found this helpful

Hasan Q.Reviewed in the United States on November 25, 2019
2.0 out of 5 stars
they messed up everywhere
Verified purchase
SPOILERS AHEAD************
***************
*****************
mom has no proper excuse
she literally should have begged them and they beg her instead to come back?
she's a psycho!
if she had a legit excuse to not seeing her family for 20 years then it would be ok
also it would have been much better if hiccup's GF became the chief
he literally didnt have to
i thought it would have been interesting if he continued doing things he loved
and she was the more upbeat
she could have filled the shoes well
bad guy plot armor is so stupid
how the hell could he tame a mountain of a beast?
makes no sense
how would toothless become the next alpha
also doesnt make more sense

Rochester FanReviewed in the United States on January 22, 2021
5.0 out of 5 stars
Great Story, Great Animation, Perfect Casting
Verified purchase
Awesome in every respect! I'm embarrassed at how much I love this movie. I'm a former sailplane racing pilot and the flying scenes compete with AVATAR! Brilliantly done. Every frame is a visual treasure. HTTYD2 may be as great an achievement in movie sequels as ALIENS. I'm an amputee, via Vietnam, and I love that this movie features two amputee heroes, and it doesn't shy away from the subject. For example, there are many shots featuring the boy's innovative peg leg. His loss of his foot is treated very matter-of-factly, which is excellent. The HTTYD three-movie series is a mega-superior one-night binge-watch. Ten stars!
3 people found this helpful

JoshuaReviewed in the United States on February 20, 2018
2.0 out of 5 stars
I liked the first one
Verified purchase
Too over the top for kids. I liked the first one, because it was a family night kind of movie. This one had made death a common thread in the movie. Seeing the death of the alfa dragon, was over the top. Seeing the dad die, was too much for a kids film.

Not recommended.
18 people found this helpful

Michael CastReviewed in the United States on November 29, 2014
5.0 out of 5 stars
FIVE stars and a big "BRAVO!!"
Verified purchase
This is a good one! Anyone that likes animation; kids, big kids and little kids, and even fifty year old kids! I found this Train your Dragon 2 was just as good (if not even better) than the first one. Jay Baruhcel did something that I found very amusing: the antics going on behind the scene, like when Hiccup was explaining something and Toothless was being swamped by the baby dragons was hilarious! There was something going on all over the whole screen! The detail and the activity of each character constantly doing something at the same time all over the screen will definitely make you want to watch it again and again. And the addition of a new super Dragon (thats all I'm going to say about it so I won't spoil it for you) is awesome to say the least. The first How to train your Dragon, was a such a hit, that it inspired spin off cartoons -it was THAT good...and now I think we are just going to see more and more of the young man and his Dragon friend! Parents, people of all ages watch this with your families or by yourself. It's a truly wonderful story.
24 people found this helpful

Spiderbaby FastwolfReviewed in the United States on September 30, 2017
5.0 out of 5 stars
I'm not crying you are!
Verified purchase
Way to make me all vaklempt about a smart kind boy and his adorable dragon. That Hiccup is intelligent first is one of the joys of this series. Add in strong female characters and some growth on the part of the characters, you got you a great story. Toothless the dragon acts for all the world like my kitty Spider. Adorbs.
15 people found this helpful

John M. GreenerReviewed in the United States on July 1, 2018
4.0 out of 5 stars
One big issue
Verified purchase
OK the first one was awesome. The story arc, how Hiccup "got"Toothless and the father/son dynamic were all way above what I expected. And Hiccup's injury was a tearjerker as was his "death:. And that music when Toothless was drawing in the dirt and then Hiccup and the nose touch! Pixar eat your heart out!
i loved this movie too but have one issue SPOILER ALERT My issue was with Toothless killing Stoic. I know the King made him, but still. I just hate the thought of Toothless being responsible, I loved the beginning with Hiccup and Toothless exploring. Andnn Valka and Stoic singing was awesome! And I thought that scar on his chin had a story! I noticed it in the first movie and thought... there's something there! Hiccup becoming Chief was awesome as was all the dragons bowing to Toothless. And we now know ut dragon saliva tastes terrible and is a b tch to get out of clothing!
2 people found this helpful

KarahReviewed in the United States on April 17, 2015
5.0 out of 5 stars
Love, Love it!!! Excellent film
Verified purchase
Outstanding movie! Absolutely love the two movies. This whom he has the best animation that I have ever seen in any film! Great job team HTTYD 2! They really should have won the Oscar for that alone. I'm not going to do a full review because many have done so before me,and done it much better than I could. There are A couple of things I'm going to address though. Contains spoilers

First, I do agree with many that I wish that they would not have killed off Hiccup's Father Stoick. I really loved the idea of he and Valka having a second chance at their marriage. Second, I don't know why people are complaining about this film having a abnormal amount of death in it. Has anyone paid attention to Disney's movies? Like Big Hero 6? In that film, the parents are dead and the brother dies. All of Disney's films are like this. Even the new version of Cinderella. Both the parents die. Usually they just show the father dying in Cinderella,but that's Disney for you. By the way, I did like the above mentioned films. I'm not bashing them. Just trying to make a point. I didn't like it that Stoick died, I wish he would not have. I just think it's a great film. I also like the way they show how the kids and the dragons care for each other. It's amazing how they show that genuine emotion between the dragons and the kids. Unfortunately, Kids watch movies that are far worse than How To Train Your Dragon 2. Far more violent with death and many other things kids should not be watching. Anyway, loved the movie and looking forward to the third one😃
2 people found this helpful
See all reviews
Back to top
Get to Know Us
Make Money with Us
Amazon Payment Products
Let Us Help You
EnglishChoose a language for shopping. United StatesChoose a country/region for shopping.
© 1996-2022, Amazon.com, Inc. or its affiliates