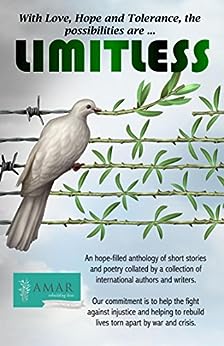 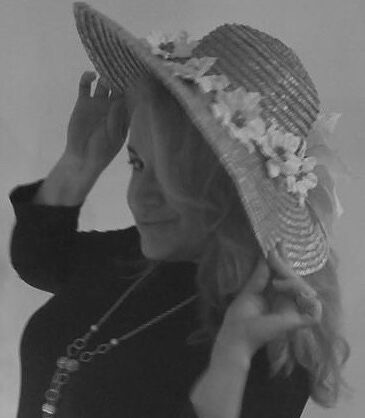 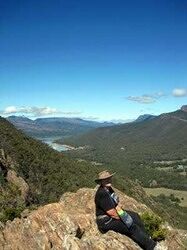 LIMITLESS: (With Love, Hope and Tolerance the Possibilities are Limitless) Kindle Edition

This is a collection of short stories and poems by a very creative and passionate group of writers and poets who want to make a difference.

All profits from this anthology will be donated to the AMAR Foundation - an award-winning charity that works in the Middle East to help millions rebuild their lives in countries scarred by war. For 25 years AMAR has provided a package of healthcare, emergency relief, and education, to help improve the lives of some of the world’s most disadvantaged people.

There is something for everyone in this collection of stories and poems.

The amazing contributors of LIMITLESS are:

Samfreene
VINE VOICE
5.0 out of 5 stars In a world with no boundaries your possibilities are LIMITLESS!
Reviewed in the United States on November 21, 2017
Verified Purchase
Limitless: A Collection of Love, Hope and Tolerance

Piaras
VINE VOICE
5.0 out of 5 stars A wonderful project for a good cause.
Reviewed in the United States on October 7, 2018
Verified Purchase
I commend these authors very highly in being able to create a collection of short stories and poetry that is powerful, passionate, and loving. Recommended highly!
Read more
Helpful
Report abuse

Kindle Customer
5.0 out of 5 stars A WONDERFUL COLLECTION
Reviewed in the United States on October 29, 2017
LIMITLESS A COLLECTION OF POETRY AND SHORT STORIES-VARIOUS AUTHORS AND POETS
While I wouldn’t usually sit down and read a collection of poems in one sitting, this collection had me rivetted and I found I couldn’t stop. There were 3 different themes in the book, love, hope and tolerance which I feel is what the world needs at this time.
I am usually not a huge fan of poetry but I really enjoyed the poems collected in the book. The short stories are what inspired me, especially the one about tolerance and I really enjoyed the one about the great blue heron.
Over all this was a fine anthology written for a good cause and I happily give LIMITLESS 5 stars!
Read more
Helpful
Report abuse

Jim
5.0 out of 5 stars A Captivating Read
Reviewed in the United States on November 10, 2017
Disclaimer: I had the privilege of contributing two stories to "Limitless". I ordered a copy... its for charity. After it arrived I sat down to check on my stories and then began reading. Hours later my lovely wife reminded me that we were approaching supper time. Beautiful, touching stories. Poems are not my thing, but I will admit to being captivated by a few here. A convert perhaps? "Limitless" is a wonderful example of and contribution to how the people of the world can help each other when in need. We are going to need more of this!
Read more
One person found this helpful
Helpful
Report abuse

Ann Stanmore
5.0 out of 5 stars Delightful
Reviewed in the United States on November 20, 2017
I really enjoyed this book. A delightful mix of poems and short stories, all engaging, some thought provoking. A deal of understanding of human nature here.

I was a little emotional reading 'I'm not the woman I once was' as I had lost a son. Even though he was grown up the feelings are still there.

I began to list the poems and stories I liked most then deleted when I realised it was ALL of them.

A wonderful book in aid of a worthy cause, this fully deserves five stars.
Read more
Helpful
Report abuse

Book Reviewer
5.0 out of 5 stars Congratulations on a wonderful project for a good cause!
Reviewed in the United States on November 3, 2017
The concept alone made me want to read this book. A collection of stories themed around hope, love and tolerance and all profits going to such an amazing cause. What was wonderfully satisfying was just how enjoyable this collection was to read. Each author and poet offers their own style and perspectives and that's what I really loved. There were obvious favourites (I won't tell which ones), but I can highly recommend this as there is something in here for everyone and anyone.
Read more
Helpful
Report abuse
See all reviews

Book Reviewer
5.0 out of 5 stars There is something in here for everyone.
Reviewed in the United Kingdom on October 31, 2017
Verified Purchase
Great collction of poems and stories and it was made even more impactful by knowing that all profits are donated to such a good cause.
The different writing styles and stories and prose will suit any reader.
Read more
Report abuse

mhembroff
5.0 out of 5 stars All the stories in this book have messages of love, hope and tolerance. Suitable for all ages.
Reviewed in Canada on October 7, 2017
Verified Purchase
This is a collection of stories written by authors all over the world.
One of my favorite stories so far is Big Dreams by Grant Leishman. This is a story about Angelo, a twelve year old boy who lives in the Philippines. His big ambition is to get an education. His parents are farmers who have a small plot of land to grow crops to feed their family. Angelo has many miles to go to school and gets up at four a. m. to make that long trike in all kinds of weather. He meets up with his best friend and the two of them face the many dangers they encounter on their trip to school. He never misses a day and is always on time. He hopes to go to high school and then college but doesn't know how he will accomplish this. He is deeply religious like his family and prays every day that the way will be made clear for him to continue his education. At school he studies an old atlas and is fascinated with the map of Canada and dreams about going there one day..
Read more
2 people found this helpful
Report abuse

Jim
5.0 out of 5 stars Wonderful Collection, Wonderful Cause.
Reviewed in Canada on December 4, 2017
Verified Purchase
This is a wonderful collection of loving poems and short stories, donated by the authors. All proceeds go to help families devastated by war to get re-established. There could hardly be a better cause. BTW: The charity's patron is Prince Charles.
Read more
Report abuse