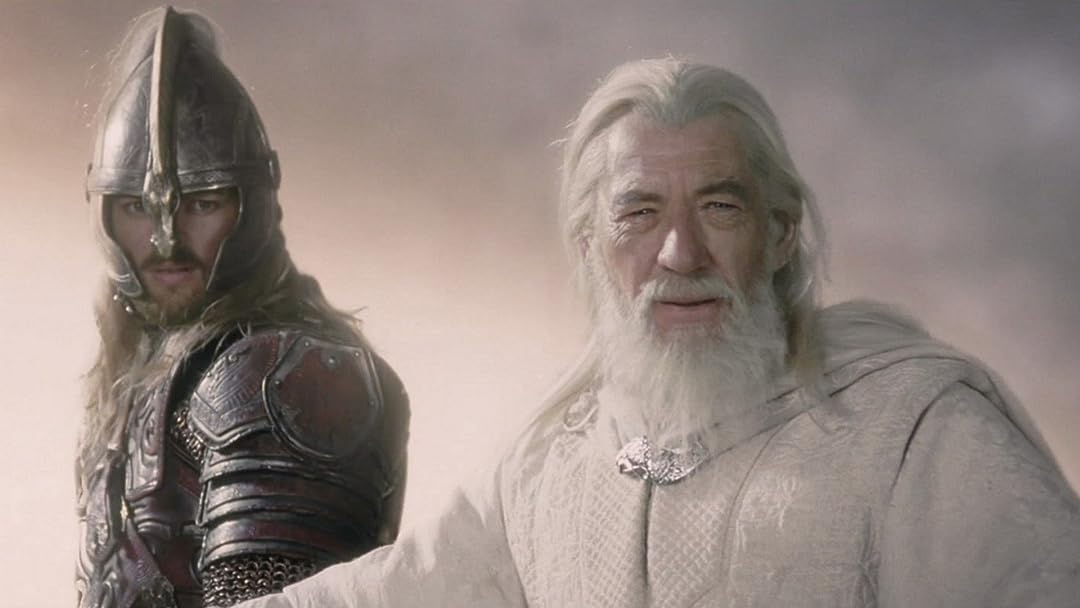 Lord of the Rings: The Two Towers - Extended Edition

By ordering or viewing, you agree to our Terms. Sold by Amazon.com Services LLC.
Write review

G-maReviewed in the United States on September 20, 2018
5.0 out of 5 stars
Lord of the Rings: Two Towers
Verified purchase
If you are a fan of the Lord of the Rings Trilogy, this is of course, a must to have. I had originally ordered the full screen by mistake. Had to order "wide screen" for the full effect. At least once a year I watch all 3 of these movies plus the "Hobbit" series. It's become a "family tradition" so to speak. Even tho much is left out of the movies that is in the original book, the movies are great entertainment. Telling of great courage, friendship, bravery. In a way, I think it's simply the story of good versus evil with heroic deeds, terror, and all thrown in.
30 people found this helpful

BelleReviewed in the United States on July 9, 2022
5.0 out of 5 stars
LOTR films are magnificent.
Verified purchase
I wish I could put to words the breathtaking magic of the Tolkien books and how masterfully Peter Jackson, Philippa Boyens, and Fran Walsh manifested these books into films that we will treasure for years to come. I am an enormous fan of the 1959 Ben Hur with Charlton Heston. The film won so many academy awards and is still a timeless classic. Absolutely magnificent, just like Jackson's LOTR films (which also won their fair share of academy awards). From the casting, to the directing, the sound, the lighting, the special effects, the cinematography, the camerawork, the costumes, the music (gorgeous), the script, the acting, and on....I have nothing but thunderous applause and praise to offer. Truly, a masterpiece that I cry over time and again and never tire of, for it is the closest we can reach to heaven on earth. Pure magic and wonder! I have to liken its quality to classical music. Classical music is the pinnacle of musical excellence, and those who cry that it is boring, simply lack the capacity to understand its depth and magic. Tolkien's books and Jackson's Hobbit/LOTR films fall into that same category of excellence. If you find them boring or weird, you are lacking in the spiritual depth to comprehend this mastery.
4 people found this helpful

joel wingReviewed in the United States on October 16, 2020
5.0 out of 5 stars
Extended version of the best of the trilogy About how the Fellowship couldnt give up hope
Verified purchase
This is a four disc extended version of Lord of the Rings: The Two Towers.

The Two Towers lays out a series of seemingly impossible situations the Fellowship of the Ring now divided into separate groups must face. First, Frodo and Samwise are heading towards Mordor on their own and must allude the forces of Sauron. Second, Pippen and Merry have been kidnapped by Orcs while Aragorn, Legolas and Gimli are chasing after them to try to free them. Finally, Aragorn, Legolas and Gimli come across the Kingdom of Rohan which is about to be attacked by a huge army of Orcs under the command of the sorcerer Saruman. Sauron and Saruman are the Two Towers the Fellowship must face. It seems like so few can’t stand up to so many. It’s the unexpected help of Golem, the return of Gandalf, the leadership of Aragorn, and the discovery of the Ents that will give them the chance to turn the tide.

As the extended version of the film there are several new scenes that were not included in the original. For example Eomer of Rohan finds Theodred the prince of the kingdom dying at the hands of Orcs under the command of Saruman. That gives background to why Eomer tried to convince the king to defend Rohan from the sorcerer. Some are much more important than others but they do help fill out the story. That also means the film is split between 2 discs.

The other two are filled with extras on things like filming in New Zealand, the artwork, etc.

While not essential if you already have the original film release of Two Towers I did really enjoy the extra scenes and of course the two other discs are for the real fans.

Chris SheppardReviewed in the United States on February 16, 2019
1.0 out of 5 stars
NOT THE EXTENDED EDITION!!
Verified purchase
I tried to order the extended edition blu ray. I already had the extended edition trilogy. Unfortunately, I ordered it a couple of years ago and just realized I had two fellowship of the ring movies and no two towers. When I looked up the two towers extended edition I was sent to a place that stated it was unavailable. There was an option to order the blu Ray. I hit the button and bought this believing it was the extended edition. I now feel ripped off twice. The movie is amazing if you haven’t seen it. This is just the theatrical version however. I am referring to the two towers, blu-Ray edition. I don’t get why amp on mixes these reviews so you are never sure what you are getting by reading the reviews either.
18 people found this helpful

ikataReviewed in the United States on August 15, 2022
4.0 out of 5 stars
Almost great, but not
Verified purchase
It’s a good fantasy movie but a mediocre adaptation of Tolkien. Too much Hollywood formula and not enough respect for the source material. For example, there’s too much Arwen. It’s not like Tolkien needed another strong female character with Galadriel and Eowyn (although they just had to tweak her too). I thought the entire cast did an excellent job but I think Sean Astin’s portrayal of Samwise is phenomenal. Again the entire cast was wonderful, but Samwise has always been my favorite character in the story and Sean Astin really brought him to life. The scenes are great; the effects spot on. My only complaint is the unnecessary changes to the story, which I assume were done to please the Dark Lord corporate masters.
One person found this helpful

Amazon CustomerReviewed in the United States on August 19, 2022
3.0 out of 5 stars
Tolkien would erupt in rage.
Verified purchase
Just more cinematic manipulation using great names to attempt to create legitimacy. Every gimmick in movie history is used in succession but more expansive. Every one of the litany of PBS cartoon phrases wold have Tolkien twisting in his grave. The theocratic agenda is again propelled on the legacy of great authors who are no longer alive to say no!

Any time you see "based on the novel by..." you are looking at calculated deceit.
2 people found this helpful

Amazon CustomerReviewed in the United States on October 21, 2022
5.0 out of 5 stars
A love letter to the source material and the fans.
Verified purchase
I've used my review from Fellowship of the Ring here because it certainly applies to this installment, as well.

Every person who worked on this trilogy clearly took such care to be authentic, true to the material and lovingly craft their individual piece in the broader picture. You can see, hear and feel it in every scene from the sets, to the phenomenal score and sound design, to the special makeup effects and the carefully used CGI, to the craftsmanship of the costumes, armor and weapons, to the epic cinematography and real life location choices, the direction and last but certainly not least - the acting. These films are a masterclass in quality and devotion to a timeless and enduring classic that was so brilliantly and meticulously created by J.R.R. Tolkien. It's clear that these films were careful to capture the spirit and intention of this story and honor it in such a beautiful and heartfelt way. There are so many fans of this story because it's such a human story. It's such a relatable story in so many complex ways but what isn't complex is that we ALL connect to these characters. Regardless of who you are or where you come from. This is a tale of the human experience. It shows us love and compassion, evil, greed and moral corruption. It shows us perseverance and endurance, sacrifice, loss and tragedy. It shows us humor and innocence, and it shows us a sense of duty, morality and honor against overwhelming odds. These films and the story they tell are windows into the very best and the very worst of all of us.

These stories are masterpieces of what it means to be human.

While some changes were made for the big screen adaptation, they were NOT at the expense of J.R.R. Tolkien's vision and story. No need to revise or add in modern politics, or have this world "reflect our current world." That's the point. You cannot improve upon J.R.R. Tolkien's work and it would be insulting to think you could. That's why these films are so beloved and so enduring.
One person found this helpful

Nicolas ManfrediReviewed in the United States on February 10, 2019
5.0 out of 5 stars
A RESOUNDING SUCCESS OF A MOVIE
Verified purchase
There are a million good things I can say about this movie, but I will strictly review this product. The packaging is amazing and the art inside is just bafflingly gorgeous! The runtime of 223 minutes makes for one of the longest movies ever filmed, but you just can't stop watching it over and over again. My version was only in English and Spanish, but the audio and screen view options were great. It has support for Dolby Digital 5.1 EX and Dolby Digital 2.0 Surround. Looking at this movie one my 42 inch Full HD TV was one of the greatest experiences I have had in terms of home cinema. Highly recommend it for all Tolkien fans and cinema lovers alike.
8 people found this helpful
See all reviews
Back to top
Get to Know Us
Make Money with Us
Amazon Payment Products
Let Us Help You
EnglishChoose a language for shopping. United StatesChoose a country/region for shopping.
© 1996-2022, Amazon.com, Inc. or its affiliates