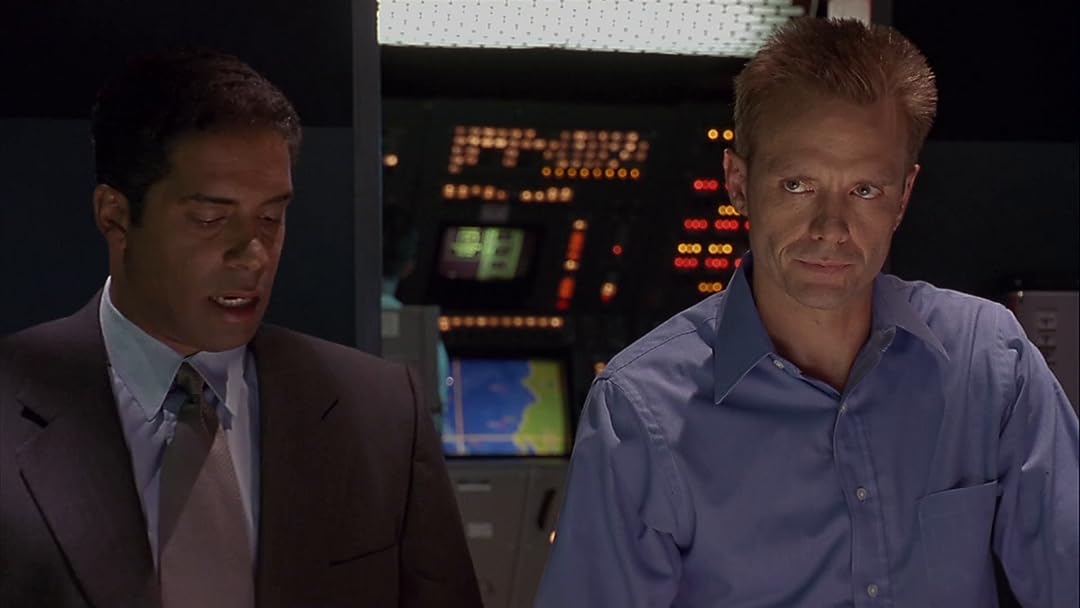 (377)
3.91 h 46 min2001X-RayPG-13
Megiddo is a supernatural ride into a world teetering on the edge of the Apocalypse. It follows the rise of a Machiavellian leader bent on amassing the armies of the world for the battle of Armageddon while calamities of Biblical proportions pummel the Earth.

WayfinderReviewed in the United States on December 10, 2021
1.0 out of 5 stars
Stupid, stupid, stupid
Verified purchase
Religious inaccuracies aside... this is on par with Asylum films. They really dove into the pudu on this one.

This movie is pro-U.S. nationalistic political propaganda. It teeters and then falls into xenophobia. It portrays men fighting for Christ at the final war when scripture clearly states that Christians will take no part in the battle.

This movie is nothing more than a blasphemous fantasy that no one should take seriously, whether Christian or atheist. It grossly misrepresents scripture (and thus Christianity) and takes so many liberties with the book of Revelation it can't even be considered plagiarism, much less speculative prediction. From a story standpoint, while scripture does state nation will battle against nation, it also makes it very clear that all nations will be against God and that all nations will be destroyed as a result.

As with many movies of this type it literalizes the antichrist and tries to present such as one man. There's really no mystery regarding that term. It's simple: anti-Christ. Paul said the antichrist already existed in his day. The antichrist has been around for almost 2,000 years. The Pharisees of Jesus' day were antichrist. Yet these movies time and again try to portray this as a single individual. They get it wrong every time. (And frankly, so do some churches, which is just sad.)

So this movie fails on all levels: theological, scriptural, and as a cinematic production. Whew, what a stinker. The only redeeming factor is some rather impressive military skirmishes and explosions near the end. Beyond that, this is a total mess of a film and an offense to Christianity as a whole. Asylum move over-- you have some competition at the bottom of the barrel.

J. CuddyReviewed in the United States on December 9, 2021
1.0 out of 5 stars
An obvious military propaganda film with pseudo-theological window dressing
Verified purchase
Same old "deus ex machina" theme that excuses everyone from personal daily minute-by-minute active responsibility for what happens ultimately, to one's self, to others, to earth, and the rest of creation, so war is just a glorious heroic opportunity to prove that if you believe in the right religion you can't lose, so actually living as Jesus showed us is irrelevant, since all you have to do is say his name and bow, no matter what human history shows about how we sold our lives and for what. Not at all what the New Testament teaches.
10 people found this helpful

AhlumbaReviewed in the United States on December 8, 2021
1.0 out of 5 stars
Blasphemous
Verified purchase
If you worship America and or don't study the word of God then maybe this movie is for you. The movie is a great disappointment and just plain terrible.
8 people found this helpful

LorraineReviewed in the United States on May 26, 2022
5.0 out of 5 stars
Everyone should watch this DVD.
Verified purchase
This movie/dvd is so good. It shows things that everyone should see. Jesus Christ is coming soon. A lot of what’s going on in our world today is on this dvd. We shouldn’t ignore what’s happening around us however, the most important thing is to keep our focus on Jesus. He’s the Way, the Truth, and the Life.
2 people found this helpful

Martin P. EnglishReviewed in the United States on December 9, 2021
1.0 out of 5 stars
The high ratings are a result of an algorithm
Verified purchase
If any one knows how algorithms work will understand the false 4 + star rating. garbage. Christian crap garbage. I do not need to be converted. Just another Revelations movie meant to scare sheep minded people into converting to an extrema right form of evangelical Christianity. The production company is an offshoot from Trinity Broadcasting.
5 people found this helpful

Robert T.Reviewed in the United States on November 25, 2021
3.0 out of 5 stars
WELL... IT'S WATCHABLE AT LEAST! :-\
Verified purchase
If you don't have anything to do and want to watch something that's at least somewhat "interesting", then this movie will suffice. The acting wasn't "horrible", and the special effects weren't "horrible", and I only fell asleep on it once; so that's TOO bad. Unfortunately it DOES end up turning into a live-action "Davey & Goliath" movie later (remember that old claymation show? lol) This turns into something that will definitely put you in mind of that but the good news is... it's almost over by then lol.
2 people found this helpful

LadyCReviewed in the United States on January 1, 2022
1.0 out of 5 stars
0 stars...not worth your time to watch...you can never regain the wasted time
Verified purchase
I sat through about five minutes of this movie, and wish I hadn't even wasted that much time. It is nothing but filth and garbage, which about sums up what the "enemy" wants you to throw your life away on anyways. The ONLY TRUTH you will learn from this film is that there is nothing Biblical about it at all. Don't waste your time.
4 people found this helpful
See all reviews
Back to top
Get to Know Us
Make Money with Us
Amazon Payment Products
Let Us Help You
EnglishChoose a language for shopping. United StatesChoose a country/region for shopping.
© 1996-2022, Amazon.com, Inc. or its affiliates