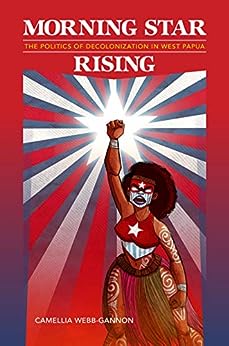 by Camellia Webb-Gannon (Author) Format: Kindle Edition
See all formats and editions
Sorry, there was a problem loading this page. Try again.

That Indonesia’s ongoing occupation of West Papua continues to be largely ignored by world governments is one of the great moral and political failures of our time. West Papuans have struggled for more than fifty years to find a way through the long night of Indonesian colonization. However, united in their pursuit of merdeka (freedom) in its many forms, what holds West Papuans together is greater than what divides them. Today, the Morning Star glimmers on the horizon, the supreme symbol of merdeka and a cherished sign of hope for the imminent arrival of peace and justice to West Papua.

Morning Star Rising: The Politics of Decolonization in West Papua is an ethnographically framed account of the long, bitter fight for freedom that challenges the dominant international narrative that West Papuans' quest for political independence is fractured and futile. Camellia Webb-Gannon’s extensive interviews with the decolonization movement’s original architects and its more recent champions shed light on complex diasporic and intergenerational politics as well as social and cultural resurgence. In foregrounding West Papuans’ perspectives, the author shows that it is the body politic’s unflagging determination and hope, rather than military might or influential allies, that form the movement’s most unifying and powerful force for independence.

This book examines the many intertwining strands of decolonization in Melanesia. Differences in cultural performance and political diversity throughout the region are generating new, fruitful trajectories. Simultaneously, Black and Indigenous solidarity and a shared Melanesian identity have forged a transnational grassroots power-base from which the movement is gaining momentum. Relevant beyond its West Papua focus, this book is essential reading for those interested in Pacific studies, Native and Indigenous studies, development studies, activism, and decolonization.

Camellia Webb-Gannon is a lecturer at the University of Wollongong and coordinator of the West Papua Project.

Noelani Goodyear-Ka‘ōpua is professor of political science at the University of Hawai‘i at Mānoa.

April K. Henderson is senior lecturer and director of the Va‘aomanū Pasifika―Programme in Pacific Studies and Samoan Studies at Te Herenga Waka Victoria University of Wellington. --This text refers to the paperback edition.