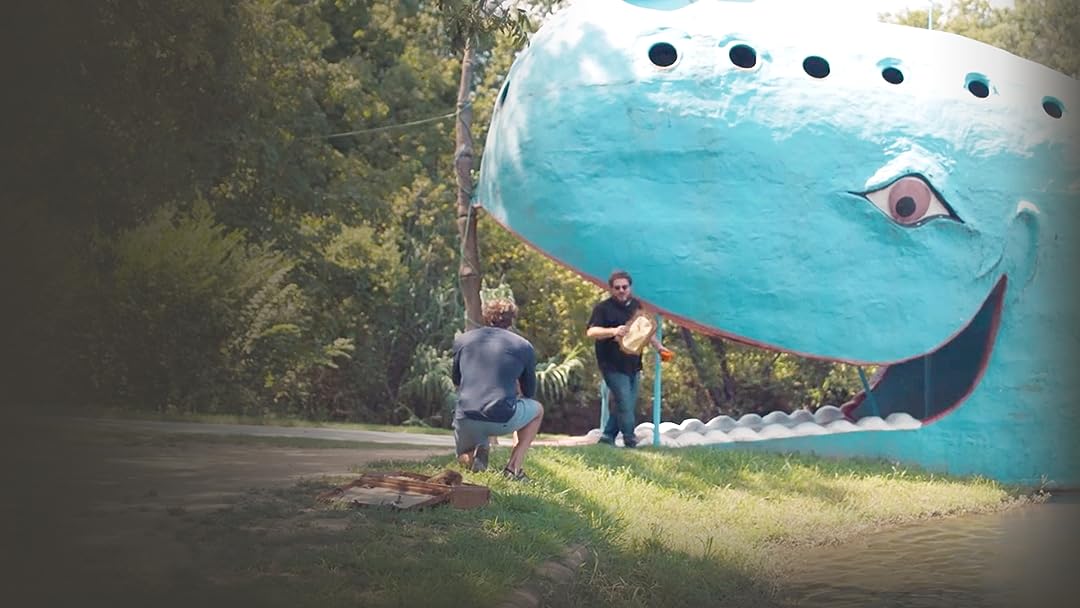 The Road to Edmond

(106)
2 h 5 min201818+
Imagine a youth pastor whose support for a gay teen puts his job in jeopardy. After the church puts him in a two-week Jesus timeout, he hits the road, and all kinds of craziness ensues causing him to question faith, sexuality, and Jesus.

Esialb Reviewed in the United States on August 3, 2022
5.0 out of 5 stars
Quirky, irreverent, creative
Verified purchase
Watched this after listening to Tripp’s podcast for awhile this week. No matter where you’re at on the Christian spectrum you should watch this.

ThierryReviewed in the United States on March 29, 2020
4.0 out of 5 stars
What a Heartfelt Independent film
Verified purchase
I kept going back and forth between three and four stars. The film is pretty amateurish, and I did get tired of all the prognosticating that the chubby star in the film kept at. But, when all is done, I thought it turned out to be quite a good little independent film.

It really did seem that the two lead protagonists were having conversations that real folks might have. That the young youth minister was wrestling with his faith, and trying to shore up what he was told was standard church policy (that of condemning same sex attraction). and what he experienced with an actual person dealing with this difficult issue, really fared well as a theme for a movie.

There were some very interesting surprises in the film that I really enjoyed ,and was impressed with the character study of both of the protagonists, and how thoughtful both of them were in rooting so much of the nonsense that so many of the evangelical churches espouse. Interesting in that what college teaches people is how to learn to think for themselves, and the evangelicals attempt to get people to dismiss thinking altogether and expose their own misguided rot.

If we really tackle an important subject, most of us have some difficulty in doing what we consider to be the right thing. This film goes to prove that if ordinary people take it on with sincerity and honesty, good things can be the result.

EReviewed in the United States on May 14, 2020
4.0 out of 5 stars
Is It a Christian Movie?
Verified purchase
I am a Christian. My family and I like to watch Christian films. There have been times when we've started watching what we thought was a Christian film only to find out that it was not. I hate when that happens. So I watched this movie before presenting it to my family because I wasn't sure what stand it would take as far as Christianity. This is definitely a different kind of Christian film. There is cursing, but I do feel like it has a good Christian message. That of the fact that God loves us all no matter our sexual orientation, where we're from or which side of the political line we fall. I found this film had a great message. The acting was a little rough at times, but it's what I expect from an independent film. I'm also from Oklahoma so the time line of how long it would take to get from the blue whale to Edmond was way off and I found that a little distracting. I'm willing to overlook that flaw though. I will definitely watch this film again.
One person found this helpful

Jefferis PetersonReviewed in the United States on February 1, 2020
1.0 out of 5 stars
Compassion without Holiness is Lawlessness
Verified purchase
The Good: It is a well-done movie with an interesting storyline about legalism and rejection by church people. The acting is mostly good. There a few funny parts. And it shows the destructive character of law without grace and compassion for those in sin.
The Bad: The movie makes the same mistake that mainline churches do in their attempt to love without conditions while ignoring what the Bible actually teaches about holiness. In that sense, they pretend to be "more compassionate" than God. Indeed, the main character proves this point by ripping out a page of the bible he doesn’t like and rolling a joint with it. Of course, this has to do with scriptures towards homosexuality. The main character performs a lesbian wedding in a church and has a good sermon about love, but rejects what the Scriptures says is sin.
Now there is no question that we are to love everyone, but we are not supposed to endorse everything. Sin, according to the scriptures, is to miss God's mark: his intended plan and purpose for your life. It is wrong because it hurts you. Jesus said, "God made them male and female; what God has joined together, let no one break apart."
His intent for man and woman is marriage. In their difference, the man and woman represent the image of God as partners in communion. Anything other than that is a distortion of God's image in humanity and of his intended purpose for creation.
To be a Christian means to be a disciple of Jesus, and to be a disciple of Jesus means you have to follow his teachings, not set up your own rules like Adam did in the Garden of Eden.
My point is this: the movie pretends to be a breaking-of-the-bounds redefinition of God's love as all accepting of all behaviors, but in truth, it endorses lawlessness in the place of the grace that leads to holiness. Contemporary culture aside, the Bible is either the ultimate guide for "matters of faith and practice," or it is no guide at all. Rewriting the scriptures to suit one's own opinion or desires is just another instance of man trying to replace God because he, the man, thinks he knows better than the Creator.

Mark AhrensReviewed in the United States on May 15, 2020
4.0 out of 5 stars
Road Trip Movie Wrestling with Big Ideas
Verified purchase
This is a road trip movie that follows familiar plot of two strangers becoming friends and learning life lessons along the way. What makes this stand out is the type of life lessons learned. Hot issues related to faith in today's culture are wrestled with in a sincere fashion, though the movie does have a preferred point of view. For a low-budget "Christian" movie, the cinematography, soundtrack, humor, and acting (specifically for the character of Larry who reminds me of a Seth Rogen-type personality) make this a pleasant surprise. Lots of scenes are spent between these two characters talking while traveling, but there are some larger scenes too (a wedding comes to mind) and gorgeous scenery throughout. If you have Amazon Prime, this is streaming free. Give it a try!
One person found this helpful

Douglas Russell BlackReviewed in the United States on August 7, 2020
5.0 out of 5 stars
Beautiful and thought provoking
Verified purchase
The male leads with excellent acting and a great script, do a wonderful job of portraying two men of very different personalities. Their interaction with the gradual development of friendship and respect is fascinating. The beautiful musical score with it's frequent keyboard solos is an excellent compliment to the flow of emotions and circumstances in the film. The film is philosophical and deals with the hypocrisy integral to a literal inflexible interpretation of the bible. The precipitating issue is a youth minister's effort to deal with the Church's rejection of the sexual orientation of one of the students by providing her with loving support. Themes expand to exploration of the church's perception of God, his love, his dealing with sin and biblical definitions of unacceptable behavior. One of the characters has a delightful surprise for the other late in the film and it also delights the viewer. Lots of humor especially in the early parts of the film. Fun and interesting for open minded people.
5 people found this helpful

@gwalterReviewed in the United States on May 17, 2020
5.0 out of 5 stars
Well Done! Great screenwriting, Great Story
Verified purchase
Alright Tripp (can I call you that? I feel like I already know you - that is if you're as real as you were in the film.), anyway, hello,

I am a free-lance church planting pastor who hasn't planted a church since 2002, and that ended in 2007 - only because my employer didn't believe it was successful, or some other crazy illogical reason. Here I am years later, still dreaming, still processing, and still following Jesus - albeit in (too often) less than stellar ways.
Thanks for the film. I've already recommended it to some friends. Some others, pastors who are no longer paid to pastor, will get a recommendation from me soon - I just needed to tag you first.
Besides my grief of being an unemployed and discarded pastor, and the confusion that goes with that, your work helped me deal with some Dad grief (just lost him last August), some Dad formation (it's not easy being a  Dad after God's own heart), and some other stuff.

christian wilsonReviewed in the United States on May 10, 2022
5.0 out of 5 stars
Thought Provoking Movie
Verified purchase
Loved this Movie!!!
See all reviews
Back to top
Get to Know Us
Make Money with Us
Amazon Payment Products
Let Us Help You
EnglishChoose a language for shopping. United StatesChoose a country/region for shopping.
© 1996-2022, Amazon.com, Inc. or its affiliates