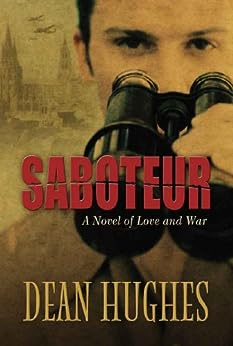 Saboteur: A Novel of Love and War Kindle Edition

by Dean Hughes (Author) Format: Kindle Edition
See all formats and editions
Sorry, there was a problem loading this page. Try again.

The year is 1943, and Andy Gledhill's months of training as a paratrooper have culminated in his being assigned to the 89th Airborne. But he soon learns that government has other plans for him. The newly formed Office of Strategic Services needs soldiers with language talents like Andy's to drop into Europe behind enemy lines and help fight the war from the inside out. Andy's new life of deception and sabotage is worlds away from his upbringing in sleepy little Delta, Utah. But even that town is changing, as the nearby Topaz relocation camp ignites racial tensions. And Whisper Harris, the girl Andy left behind, is caught in a maelstrom of conflicting emotions brought on by the war. Should she release Andy from the promises they've made, as he seems to have released her? Or should she keep on hoping?

When I read the book Saboteur, I thought it did NOT lack anything! The way the characters were, it was believable! I LOVED the book! The book Saboteur had so many wonderful Christ-like principles. If someperson thinks it lackes somethings they do not know anything about the feeling of Patriotism!.

I like this book because I'm into books that deal with spying and the like. Please tell me that there will be a follow up book to Saboteur so I can find out what happens to the charatcer in this book. thanks TC

This book is very well written. It holds your interest and does not drag. Very enjoyable story.

Dean Hughes has published more than ninety books for readers of all ages, including the popular Children of the Promise series set during World War II. He holds a Ph.D. from the University of Washington and has attended post-doctoral seminars at Stanford and Yale Universities. Dean and his wife, Kathleen Hurst Hughes, first counselor in the Relief Society general presidency, have three children and nine grandchildren and live in Midway, Utah. --This text refers to an out of print or unavailable edition of this title.

Amazon Customer
5.0 out of 5 stars Page turner
Reviewed in the United States 🇺🇸 on January 1, 2022
Verified Purchase
Such a good read! I could not put this book down!
Read more
Helpful
Report abuse

Weber Wildcat
5.0 out of 5 stars A wonderful book about the real internal conflict faced by good citizens going to war.
Reviewed in the United States 🇺🇸 on April 1, 2014
Verified Purchase
I really liked this book on CD. The book centers on an LDS teenager that goes away to war in Europe. He is faced with many harsh realities of war that conflict with the values he grew up with. At the same time, on the home front, his family and friends are also affected by World War 2 and each person is pulled in new directions.

I really enjoyed the inside look into people's lives and thought processes when faced with hard decisions and change. Although the characters in this book are Mormon, they could just as easily be Baptist, Catholic or of any other religion with Christian beliefs. It just shows the difficult internal struggle that comes with having to fight and even kill during war.
Read more
One person found this helpful
Helpful
Report abuse

Irene Godin
4.0 out of 5 stars Tis truly love and war
Reviewed in the United States 🇺🇸 on August 22, 2014
Verified Purchase
Andy is a religious man being recruited as a spy in France. He must leave his love, Whisper. In the service of his country Andy kills a Nazi and realizes he may have to do so again, it is what he was trained for. Captured, he is tortured, his partner dies in captivity. Rescued, he is assigned to a Resistance group. He sabotages, fights the enemy, and in one situation makes a momentous decision, not to kill a large group of Nazi. He is shot, hospitalized, and finally returned to his home town where he reconciles with Whisper.
Read more
Helpful
Report abuse

Sharon Salisbury
5.0 out of 5 stars well researched, well written. brought the real war and suffering to life
Reviewed in the United States 🇺🇸 on May 12, 2014
Verified Purchase
Very good book, would be good book for all ages, especially younger generation who do not have much appreciation for the sacrifice and suffering done by 'The Greatest Generation'. Brings an awareness and gratitude for not only those who served overseas, but those left behind and the injustice done to so many devoted Americans who were imprisoned against the constitution illegally because of their heritage.
Read more
One person found this helpful
Helpful
Report abuse

Kristi
5.0 out of 5 stars Wonderful
Reviewed in the United States 🇺🇸 on July 26, 2015
Verified Purchase
I purchased this as an audio at a Goodwill, I didn't realize the last CD was missing. The story was so good it was hard to stop listening to it. I had to purchase it to find out how it ended. Just wish it would have continued on a bit longer.
Read more
Helpful
Report abuse

Vincent
5.0 out of 5 stars We'll worth reading. Great realistic period piece.
Reviewed in the United States 🇺🇸 on June 10, 2014
Verified Purchase
I have consumed book after book about WWII, including biographies and history. Although this is fiction, it is realistic in many details. The story lines are interesting enough to have convinced me to read this book numerous times. Being a male over 60 I find much drama and love to see small town America, especially from an LDS perspective.
Read more
Helpful
Report abuse

Afton J. Ferris
5.0 out of 5 stars Great Book
Reviewed in the United States 🇺🇸 on March 3, 2016
Verified Purchase
This was an excellent book. I really got caught up in the story and could hardly put it down. I would recommend this book for anyone, especially people who like stories about the World War II.
Read more
Helpful
Report abuse
See all reviews
Report an issue
Does this item contain inappropriate content?
Report
Do you believe that this item violates a copyright?
Report
Does this item contain quality or formatting issues?
Report