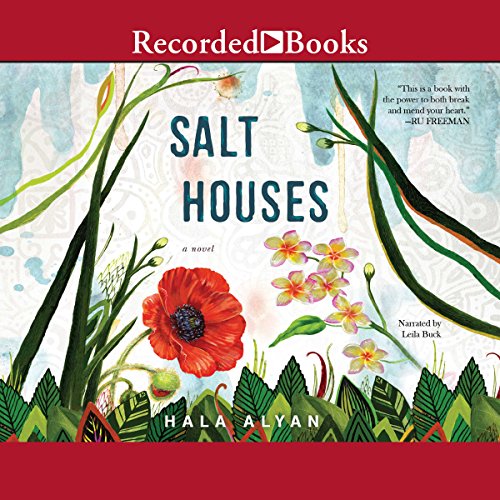 From a dazzling new literary voice, a debut novel about a Palestinian family caught between present and past, between displacement and home.

On the eve of her daughter Alia's wedding, Salma reads the girl's future in a cup of coffee dregs. She sees an unsettled life for Alia and her children; she also sees travel, and luck. While she chooses to keep her predictions to herself that day, they will all soon come to pass when the family is uprooted in the wake of the Six-Day War of 1967.

Salma is forced to leave her home in Nablus; Alia's brother gets pulled into a politically militarized world he can't escape; and Alia and her gentle-spirited husband move to Kuwait City, where they reluctantly build a life with their three children. When Saddam Hussein invades Kuwait in 1990, Alia and her family once again lose their home, their land, and their story as they know it, scattering to Beirut, Paris, Boston, and beyond. Soon Alia's children begin families of their own, once again navigating the burdens (and blessings) of assimilation in foreign cities.

Lyrical and heartbreaking, Salt Houses is a remarkable debut novel that challenges and humanizes an age-old conflict we might think we understand - one that asks us to confront that most devastating of all truths: you can't go home again.

Your audiobook is waiting!
Learn more about membership
List Price: $27.99
You Save: $4.00 (14%)
By completing your purchase, you agree to Audible’s Conditions Of Use
Sold and delivered by Audible, an Amazon company
Share

Dianne Montgomery Hocut
4.0 out of 5 stars Gumlog Gang Reading Group
Reviewed in the United States 🇺🇸 on April 20, 2022
Verified Purchase
The media could not be loaded.
Loving this book! We’re reading it in our GGRG book club. I don’t read as fast as the others because I tend to highlight, study, and Google everything I don’t understand. 😳 Very beautifully written and got me longing and wondering of not being able to be where you often long to be.
Read more
Helpful
Report abuse

ELAINE BUCKLEY
4.0 out of 5 stars A Saga of Emigration
Reviewed in the United States 🇺🇸 on January 8, 2019
Verified Purchase
Salt Houses provides an interesting and vital perspective: the Palestinian diaspora and the emotional toll emigration takes on those forced to wander from country to country.

Through the lived experiences of three generations of a Palestinian family, Salt Houses asks the reader to confront the concept of home: where is home when you have been displaced by war? Can a refugee create a new home elsewhere, even as one’s own offspring reject the values on which their culture is based? How does one maintain family bonds strained by constant upheaval? As the grandchild of emigrants who fled civil war in Belfast, Northern Ireland, these questions resonated with me.

It’s important that Salt Houses is told from the viewpoint of a moderate Palestinian family that seeks to protect its relatives, especially its sons, from jihadists—and who are deeply suspicious of the imans whipping those boys and young men into a frenzy of anti-Israeli violence. Hala Alyan succeeds in creating characters who are far from the stereotype of rock-throwing terrorists. The Yacoub family are well off, with middle-class aspirations, romances, and jobs—and a snobbish disdain for their own compatriots living in refugee camps.

From a writing perspective, several criticisms: there were too many dream sequences, which took me out of the story. Also, I did not get a sense of what many of the characters wanted. The notable exception was Alia, who is desperate to leave Kuwait and live in Amman, even as she wrestles with a deep homesickness for her childhood home in Nablus. Finally, the occasional switch to the present tense was jarring. These issues are the reason I only gave the book 4 stars.

"Atia remains too frightened to say anything that might unnerve him. What she knows about her husband, what she thought she knew about the man, has scattered like dandelion seeds beneath a child's breath since he returned from the war." Hala Alyan, Salt Houses

From the breathtaking book cover to the magnificent writing, Salt Houses is an extraordinary novel and worthy of praise. Alyan is a gifted writer who brings us a realistic story of an upper-class Palestinian family's bond, and survival through war and displacement. Although I have never been to Nablus, Kuwait or Beirut, through Alyan's impressive descriptions, I felt I had. I was able to feel the joys and sorrows of Salma, Alia, Atef, and the rest of the Yacoub family. I also learned some history of Palestinian Arabs, the Palestinian-Israeli conflict, and the Six-day War of 1967.

I honestly cannot imagine having to abandon my home, possessions, and loved ones. Or if I had to move from country to country multiple times because of war, or fear of war. Without a doubt, displacement immobilizes countries involved in a civil conflict, and unfortunately, its citizens are the ones who suffer the most. Being displaced impacts an individual's life emotionally and physically. Salt Houses gives readers a candid look at the Yacoubs' despair and hope for a better life throughout four generations. As a reader, you also witness how the family tries to remain connected, and not lose their cultural origins; while trying to assimilate to all of the different countries. I highly recommend this book to anyone who would like to gain a better understanding of the Palestinian diaspora.
Read more
2 people found this helpful
Helpful
Report abuse

Linda Hileman
3.0 out of 5 stars just okay
Reviewed in the United States 🇺🇸 on July 17, 2022
Verified Purchase
I forced myself to finish this. I thought the ending might make it worth reading. It didn’t. It seemed to be generations of complaining.
Read more
Helpful
Report abuse

Constant ReaderTop Contributor: Fantasy Books
TOP 1000 REVIEWER
5.0 out of 5 stars Well-written, Interesting, Insightful, Creative
Reviewed in the United States 🇺🇸 on October 31, 2017
Verified Purchase
Salt Houses is the story of a Palestinian family as they are repeatedly displaced by war, religion, opportunity, and politics. The story is engaging, and it is told in an unusual way with multiple points of view, multiple times, and multiple settings. Even with chapter headings that identify the point of view, the location, and the time, it usually took a paragraph or even a page until I felt oriented. I frequently had to flip back to the previous chapter so that I could figure out how much time had passed. I did not view it as a flaw, but it was different. The story spans more than 50 years. While the narrative begins in 1963, the story goes back even farther. Ms. Alyan does a skillful job of telling story that is both global and intensely personal. Leaving your country voluntarily is not the same as leaving under threat. So many areas of our world are being torn apart, and people are fleeing their homelands as we watch on television. This book gives insight into the impact that falls upon generations. She also makes a point of showing how different the experience is for people of means as opposed to people of limited resources. National identity, cultural identity, family ties, language and politics are all in play. Through the characters and the plot, we learn a lot about the experience for Palestinian refugees in Arab countries such as Iraq, Kuwait, and Lebanon and in Western cities like Paris, Boston, and New York. It is enlightening and interesting. The multiple points of view and jumps in narrative made it difficult to become fully vested in a character. I cared about them and could sympathize, but it did not invade my heart. This would be an excellent book group book for us. It is well written, told in a creative style and format and telling a story that will broaden our horizons. Knowing my book group, we would also find a great deal to talk about. I will not soon forget this book.
Read more
3 people found this helpful
Helpful
Report abuse
See all reviews

Kitty
5.0 out of 5 stars Beautiful, heartbreaking
Reviewed in the United Kingdom 🇬🇧 on March 17, 2022
Verified Purchase
Generations of displacement, tangled lives and memories. It tells of a struggle for identity without a home. So very beautiful and sad.
Read more
One person found this helpful
Report abuse

Kathryn D
4.0 out of 5 stars Great book
Reviewed in the United Kingdom 🇬🇧 on July 6, 2021
Verified Purchase
A great read about a Palestinian family having to start all over again on many occasions due to war. The family disperses themselves all over the world and the book tells their stories.
Read more
Report abuse

Carla
5.0 out of 5 stars Emotive, entertaining - thoroughly enjoyable
Reviewed in the United Kingdom 🇬🇧 on December 7, 2017
Verified Purchase
Salt Houses will speak to anyone who can imagine having to flee their family home. Written in a beautiful poetic prose this family’s love story is definitely my favourite read of the year. Hala Alyan’s book has given me invaluable insight into a culture and a war that I have little knowledge of, all the while being thoroughly entertained by her enchanting characters.
Read more
One person found this helpful
Report abuse

Alia Ataya
5.0 out of 5 stars beautiful and heartbreaking
Reviewed in the United Kingdom 🇬🇧 on May 12, 2022
Verified Purchase
A story of Palestine, love lost and the power of family. The pain of trying to find a home where one belongs.
Read more
Report abuse

Salma
4.0 out of 5 stars Excellent
Reviewed in the United Kingdom 🇬🇧 on February 12, 2020
Verified Purchase
Touching and riveting, enjoyed the tale through generations.
Read more
Report abuse
See all reviews