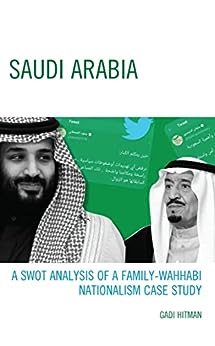 by Gadi Hitman (Author) Format: Kindle Edition
See all formats and editions
Sorry, there was a problem loading this page. Try again.

This book analyzes the process of national development in Saudi Arabia through the use of the SWOT model, which examines the kingdom's strengths and weaknesses as well as the opportunities and threats it faces in internal and external arenas. This book combines a historical and contemporary analysis of Saudi politics and society such as: sub-religious rivalry, conflict between tradition and modernization, oil's impact ton KSA's national identity, and internal instability within the royal family.

Hitman’s book offers an original perspective on the Saudi state. The monograph adopts the business SWOT model to analyze the unique case of Saudi nationalism or what is termed in the book 'family Wahhabi-nationalism’. This approach provides new insights into contemporary challenges the state faces such as the decline in the relative power of oil, the rising inner tensions in the royal family, the rift with the Shia minority, and the rising number of foreigners. This book will provide readers with a better understanding of the enigma that is the Kingdom and its potential for instability in the conflict-ridden region of the Middle East.

Professor Hitman has written a tour de force. This study of Saudi Arabia is comprehensive and interdisciplinary. By combining historical, sociological, economic, and political analysis the author presents a clear picture of Saudi Arabia’s failure to generate true citizenship and legitimate national integration. Such socio-political dysfunction is diagnosed as a major weakness, particularly in the aftermath of the Arab Spring where Saudi subjects have demanded expansion of rights only to be confronted with repression and promises of redistribution. As Saudi Arabia displays military weakness, an unsteady rentier economy and multiple internal and external threats, the future of the Saudi Kingdom seems uncertain. Given the fact that Saudi Arabia is a key U.S ally and a major player in the Middle East, the book is a must-read not only for scholars and journalists but also for public officials and decision-makers.

This book is a groundbreaking research in various scholarly dimensions: the methodology it uses, the facts that it brings about, and most of all – in the unique way of thought that the author developed. When we read analyses that refer to this country or to another we usually expect to find mostly historical assessments, chronological accounts, and political issues. However, Hitman creates an exclusive point of view by establishing his political study on the business-oriented SWOT model. This attitude, so different from the common approach in Middle Eastern studies and in reviews of political affairs, promotes an innovative discussion of Saudi Arabia. Moreover, terms like nationalism, collective narrative, and identity, once put into the SWOT model as a theoretical framework, enable the reader to comprehend Saudi Arabia in a cutting-edge manner. In future, we are likely to refer to this book as no less than a breakthrough!

Gadi Hitman is senior lecturer and faculty member in the Middle East department and political science at Ariel University.

--This text refers to the hardcover edition.