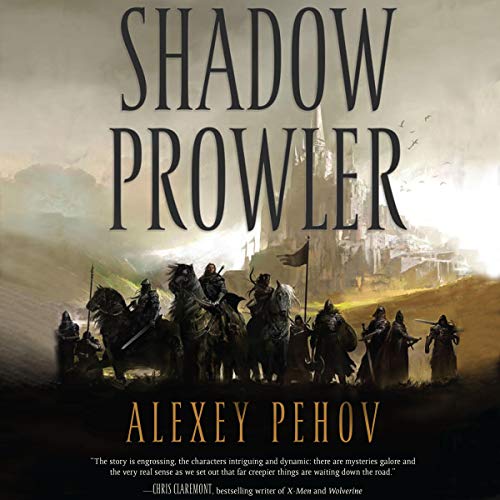 An army is gathering; thousands of giants, ogres, and other creatures are joining forces from all across the Desolate Lands, united, for the first time in history, under one, black banner. By the spring, or perhaps sooner, the Nameless One and his forces will be at the walls of the great city of Avendoom.

Unless Shadow Harold, master thief, can find some way to stop them.

Epic fantasy at its best, Shadow Prowler is the first in a trilogy that follows Shadow Harold, the legendary thief of Siala, on his quest for a magic Horn that will restore peace to the Kingdom of Siala. Harold will be accompanied on his quest by an elfin princess, Miralissa, her elfin escort and ten Wild Hearts, the most experienced and dangerous fighters in their world...and by the king's court jester (who may be more than he seems...or less).

Your audiobook is waiting!
Learn more about membership
List Price: $29.99
You Save: $4.00 (13%)
By completing your purchase, you agree to Audible’s Conditions Of Use
Sold and delivered by Audible, an Amazon company
Share

B. Capossere
VINE VOICE
2.0 out of 5 stars first book bogs toward end, second one is weaker
Reviewed in the United States 🇺🇸 on August 16, 2011
Verified Purchase
Shadow Prowler and Shadow Chaser are the first two books respectively of The Chronicles of Siala trilogy by Russian author Alexey Pehov. The series is a best-seller and award-winner in Russia, and has been translated into English by Andrew Bromfield (translator of the Night Watch series) for Tor.

The world of Siala has seen several Ages. Only the ogres survived from the Dark Era into the succeeding Grey Era, which saw the arrival of the Orcs and Elves (immediate mortal enemies) into the world. Dwarves and gnomes appeared next, and though the two got along at first, they have since become fierce enemies. The Era of Accomplishments followed with the arrival of humans.

The series takes place in the Era of Dreams, when the Nameless One (a dark sorcerer) begins to rise once again, massing a huge army of ogres, giants and other creatures of the Desolate Lands. Meanwhile, the Orcs are also readying to attack and a new, previously unknown, threat--The Master--appears on stage. The only chance to defeat the Nameless One apparently is an ancient magic horn. The only problem is the horn has been buried in the Hrad Spein (The Palace of Bones) an ages-old underground burial site for all the races, far away through the land of the orcs and elves, a massive site that over the centuries has been filled with horrors and traps.

In Shadow Prowler, a human master-thief named Harold is tapped to be part of the third attempt to retrieve the horn. The first quarter or so of the novel introduces us to Harold, then shows us how he is forced into taking on his king's Commission to seek the horn. When it is learned that the only maps of Hrad Spein lie in the Stain--a mysterious section of the city walled off by sorcery from which almost nobody has ever returned, Harold must find a way in and then out with the plans. Meanwhile, he is targeted for death by minions of both the Nameless one and the Master. Eventually, he sets out for Hrad Spein with a small band that includes ten Wild Hearts (the best, most experienced human soldiers who man the border with the Desolate Lands), a small band of Elves including the nobleborn Miralissa, and an odd pair of best friends--the dwarf Deler and the gnome Halla. The final member of the group is the king's jester Kli-Kli, a goblin who plays the fool but seems far more knowledgeable about things, including an ancient prophecy that seems to point to Harold being the Dancer With Shadows who will save the world. Shadow Prowler ends with the group reaching the city of Ranneng, though not without having suffered losses and setbacks along the way. Shadow Chaser picks up almost immediately afterward and follows the band as they continue their journey, facing sorcerous attacks and battles along the way, until they finally reach the last stage before the Palace of Bones itself--the Forests of Zagabra home to fierce elves, orcs, and goblins.
One problem with the series can be seen right away from the description--the overly familiar setting and basic plot: goblins, orcs, dwarves, elves (with some of them fiercely opposed to one another), wizards, an evil dark sorcerer rising once more, a magical talisman that will defeat him, an underground palace of beauty and horror, a master-thief, verse prophecy, a small band of outnumbered heroes trying to sneak under the dark one's radar. It all has a been-there, done that feel to it (Mines of Moria, Legolas and Gimli, to name just two obvious analogues) and while Pehov throws in a few twists: elves are fanged and swarthy (but still great archers natch), gnomes have invented gunpowder, a few kinds of undead--it isn't quite enough to overcome the familiarity of character types and plot events. One exception to this is the appearance of a long-dead (or quasi-dead) magician, but he is used far too sparingly.

It doesn't help that the novels, which are episodic in nature, are structured so straightforwardly, moving from point A to point B to point C (or plot event A to plot event B . . . ) geographically and chronologically step by step with the group. The only times the linear structure breaks are those few occasions when Harold has some visions of long-past events. Unfortunately, for various reasons, they stand out amidst the novels as much more interesting--more compelling, tense, and creative--since many of the real-time events are relatively pedestrian.

The main character, Harold, is solidly engaging, but pales a bit as time goes on. The others don't really stand out much at all as separate creations, blurring into a group of stock veteran soldier or aloof elf types. The same holds true for the villains (if all are in fact villains), whether it be a pale assassin or an evil sorcerous. None get enough page time to register as more than an obstacle, and an overly familiar one at that. The only character beyond Harold who really sticks out is Kli-Kli. Unfortunately, while he has lots of potential due to the complexity of his dual nature (a fool who knows a lot), he's far too often simply annoying (not quite Jar Jar Binks but I'd be lying if I said that name didn't flash before my eyes a few times).

Shadow Prowler seriously bogs down in the last third of the book and Shadow Prowler never picks it up again; I really struggled to finish. I'll continue on since the series is supposed to stop at Book Three to see if the story is redeemed in its climax, but at this point, I can't recommend beginning it. Check back next year.
Read more
2 people found this helpful
Helpful
Report abuse

Kindle Customer
5.0 out of 5 stars Great read and refreshing!
Reviewed in the United States 🇺🇸 on April 21, 2014
Verified Purchase
I really enjoyed reading this book, like my title says it was a refreshing read. What I mean by a refreshing read was that this book took its time developing its plot slowly and creating for you a foundation for the other books. Like most books there are some flaws in the whole series, but for me I could over look them.

I will admit that through out the other two books and this one that the mystery of what is going on behind the scenes and the larger picture does at least to me seem to get muddled with different situations. Its kind of hard to explain, it seems like the author wanted to convey that there were more than one faction/group whatever you want to call it manipulating events. So by the ending of the third book things are wrapped up nicely but yet still kind of a loss. Not really a bad loss because I very, very much like this author and his writing. All three books have a lot going on in them and again in my opinion the author takes his time with the plot and the over all story.

I like all of the characters in this book and the rest of the series, they are all given great personalities, I will say I loved the gnome and the dwarf the best! So, even though there was some problems with the book I still will have to give it five stars. I first purchased this book as a paperback book and when the second one came out I rushed to purchase it in hardback just so I could continue the story(and I normally don't buy hardback because who the heck wants to pay twice the money just for the hardback), and by the third book I had a kindle fire so purchased it digitally. Then lol I went back and repurchased the other two books digitally too, as I am writing this review I noticed that there is a new book in the world created not necessarily a fourth book to this series coming out in June. Its been a few years since I've seen anything from this author and can't wait.
Read more
One person found this helpful
Helpful
Report abuse
See all reviews

Linn
5.0 out of 5 stars Great read
Reviewed in the United Kingdom 🇬🇧 on June 19, 2016
Verified Purchase
great read Alexey brings the place and people to life so that you feel caught up in the story and can't wait till the next part to see what happens to everyone.
Read more
Report abuse