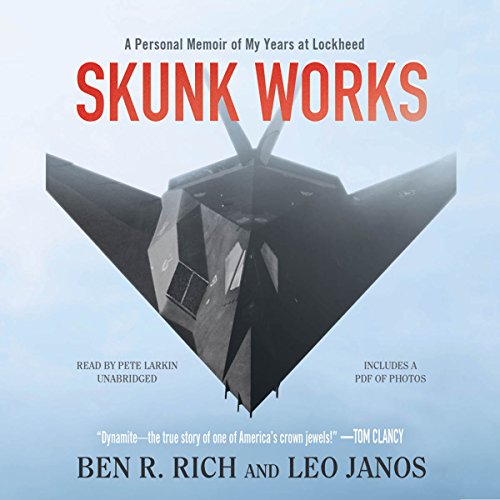 Skunk Works: A Personal Memoir of My Years of Lockheed

From the development of the U-2 to the Stealth fighter, the never-before-told story behind America's high-stakes quest to dominate the skies. Skunk Works is the true story of America's most secret and successful aerospace operation. As recounted by Ben Rich, the operation's brilliant boss for nearly two decades, the chronicle of Lockheed's legendary Skunk Works is a drama of Cold War confrontations and Gulf War air combat, of extraordinary feats of engineering and human achievement against fantastic odds. Here are up-close portraits of the maverick band of scientists and engineers who made the Skunk Works so renowned. Filled with telling personal anecdotes and high adventure, with narratives from the CIA and from air force pilots who flew the many classified, risky missions, this book is a riveting portrait of the most spectacular aviation triumphs of the 20th century.

2 free audiobooks are waiting
Learn more about membership
List Price: $28.50
You Save: $3.56 (12%)
By completing your purchase, you agree to Audible’s Conditions Of Use
Sold and delivered by Audible, an Amazon company
Share

Amazon Customer
5.0 out of 5 stars Who believes it is being used?
Reviewed in the United States on May 1, 2021
There's no doubt the book is great. This's not a secret. It is a good book for those who are devoted to research and development or who work in the defense industry.
Images in this review

It is also a handbook on how high energy strong-willed, technology visionaries like like Steve Jobs, Elon Musk and Lockheed's Kelly Johnson function as managers. The technology evolution is extraordinary and the lessons about managing in a futuristic high tech environment are outstanding.

Chapter 16 on conclusions, is a detailed very specific list of procurement process changes that are necessary If great technology is going to be able to continue to override the political self-interest of individuals in the procurement process.

On page 308 the equation describing the Harvard (HBS) summer certificate programs for technology companies says (2/3 of HBS=BS). But as we know, with two variables, two equations are necessary. The second equation in my personal opinion, having been in the courses, should be (1/3 of HBS=Ag), students must sort the BS from the Ag for themselves.

J/L Heath
5.0 out of 5 stars Great book, much better than expected!
Reviewed in the United States 🇺🇸 on September 14, 2022
Verified Purchase
This book was extremely well written. I have a general interest in aerospace stuff, but I wasn't expecting the different perspectives added in, by pilots, by politicians. I didn't expect the operational use examples of U-2s, SR-71s (or that it was RS-71 until the president said it wrong, so they had to change it). Fascinating, historical, gives one a sense of pride and danger at the risks those pilots took and take today. The end is clearly biased against the author's view of how procurement (and sustainment) should work, but it's a fair and supported perspective. Excellent book that I looked forward to getting back to and finished quickly.
Read more
Helpful
Report abuse

HP
5.0 out of 5 stars Fascinating history
Reviewed in the United States 🇺🇸 on September 21, 2022
Verified Purchase
If you are interested in the back-story of how some of the most amazing aircraft were developed, this is the book for you. The fact that it’s written by the guy who was there validates the accuracy of the book
Read more
Helpful
Report abuse

Mike Simmons
5.0 out of 5 stars An excellent history for aviation buffs!
Reviewed in the United States 🇺🇸 on September 12, 2022
Verified Purchase
An interesting history of one of our nation's most technologically advanced aerospace teams. From WWII to the present day, the Lockheed Skunk Works has been at the forefront of aviation design.
Read more
Helpful
Report abuse

At Chetkins
5.0 out of 5 stars Great Book!
Reviewed in the United States 🇺🇸 on September 9, 2022
Verified Purchase
If you are interested in aviation tech you MUST have this book!
Read more
Helpful
Report abuse

BrianD
4.0 out of 5 stars Well worth the money!
Reviewed in the United States 🇺🇸 on August 23, 2022
Verified Purchase
Good book with background on the Skunk Works, how it functioned with the government and about Kelly Johnson. I enjoyed it-would have liked a little more technical depth, but that's just me. Better than Kelly's book.
Read more
One person found this helpful
Helpful
Report abuse

DW
5.0 out of 5 stars Many detailed facts
Reviewed in the United States 🇺🇸 on July 2, 2022
Verified Purchase
The book is a great read with detailed facts from the top Engineer at Lockheed Martin. His insider information of the Skunk Works activities and programmatic relationships is stellar.
Read more
Helpful
Report abuse
See all reviews

Blacknest
5.0 out of 5 stars Fascinating book
Reviewed in the United Kingdom 🇬🇧 on August 12, 2021
Verified Purchase
I didn't think I'd be very interested in this sort of book, but it was strongly recommended by a friend. It was an absolutely fascinating story - I can't believe what those pilots and engineers did, so long ago - and a testament to the brilliance of the program is that the U2s are still flying.
I have to comment on the way the book is structured - the events aren't presented in chronological order, but in a confusing series of hops back and forth in time. I'm reasonably certain that this wasn't the author's original intention - I suspect it was the publishers' attempt to jazz up what they thought might be a book of limited interest by pushing some exciting bits of narrative to the front. A shame, really.
Read more
One person found this helpful
Report abuse

Triksiklist
5.0 out of 5 stars Fascinating behind the scenes look at the world's most secret aircraft manufacturer.
Reviewed in the United Kingdom 🇬🇧 on March 16, 2021
Verified Purchase
I've long had a fascination with the Skunk Works, producers of the U2, and of course the legendary SR71 Mach 3+ spy plane. This is an account of the some times difficult struggle to overcome the prejudices and negativity of the beaurocrats especially when the skunk works wished to build the revolutionary stealth fighter, the F117. Fas
Read more
One person found this helpful
Report abuse

N. Tubby
5.0 out of 5 stars Great history on how things can get done
Reviewed in the United Kingdom 🇬🇧 on April 13, 2021
Verified Purchase
A great read and a journey back in time to when life was simpler, there was less red tape and if you surrounded yourself with excellence, you could achieve the unimaginable in a very short space of time. (Caveating this heavily as the boss wrote the book and I’m quite sure the line workers pulled very long hours for little reward).
Read more
Report abuse

MR R A EMERY
5.0 out of 5 stars Interesting to hear how these projects came about!
Reviewed in the United Kingdom 🇬🇧 on January 9, 2021
Verified Purchase
On page 51 and I’m hooked. I’m not a reader and never have as I never find things that interest me enough. This has survived so far and is very interesting. Amazing to read about how these projects came about back in the day and how they run and hide them from public
Read more
One person found this helpful
Report abuse

Chris Bateman
5.0 out of 5 stars Fascinating insight into the F-117 but also SR-71 operations
Reviewed in the United Kingdom 🇬🇧 on November 27, 2021
Verified Purchase
Covers development of the F-117 in great detail, which in itself is fascinating. An unexpected bonus was learning more about the sheer number of SR-71 missions and the associated logistics; really brings home why it was so expensive to keep in service! Finally, it provides a very interesting insight into the brilliance but ultimately very divisive nature of Kelly Johnson. Highly recommend this book.
Read more
Report abuse
See all reviews