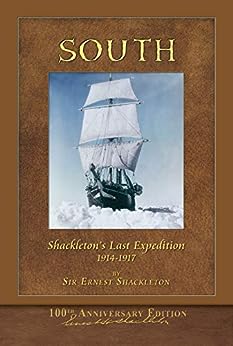 by Ernest Shackleton (Author) Format: Kindle Edition
See all formats and editions
Sorry, there was a problem loading this page. Try again.
A nice edition with 95 original illustrations and photographs from the first edition.
SeaWolf Press is proud to offer another book in its 100th Anniversary Collection. Each book in the collection contains the text, illustrations, and cover from the first or early edition. Use Amazon's Lookinside feature to compare this edition with others. You'll be impressed by the differences. Our version has:

Look for other books in our 100th Anniversary Collection.

South is Ernest Shackleton's account of the Imperial Trans-Antarctic Expedition, which took place from 1914 to 1917. This was an attempt to cross the South Pole from sea to sea. Disaster struck this expedition when its ship, Endurance, became trapped in pack ice and was slowly crushed before the shore parties could be landed. The crew escaped by camping on the sea ice until it disintegrated, then by launching the lifeboats to reach Elephant Island and ultimately South Georgia Island, a stormy ocean voyage of 720 nautical miles. Shackleton's most famous exploit brought him praise for his leadership abilities in saving all the men. The expedition was launched just as World War I started. The men knew nothing about the war until they were rescued.

Charles A. Bledsoe
5.0 out of 5 stars Excellent Read
Reviewed in the United States 🇺🇸 on September 9, 2022
Verified Purchase
"South" is an excellent read. It is like reading directly from his personal journal. There is not any"fluff" or unnecessary descriptions. Everything is short and to the point. I enjoyed the writing style because I don't like very much wasted descriptions. For example, The size, weight, and style of the ship is good information to know The color, tones, the width of the lumber, etc. are more details than I want to know. I completely enjoyed the masculine tone and writing style.
Read more
One person found this helpful
Helpful
Report abuse

Joya
5.0 out of 5 stars Thrilling true story.
Reviewed in the United States 🇺🇸 on March 29, 2022
Verified Purchase
I read this book years earlier and bought this copy as a birthday gift for a family member. It’s a true story of adventure bravery and yes Endurance, the name of Shacleton’s ship. Coincidently, just recently after having been “lost” for more than a hundred years, the Endurance was found. A truly great story.
Read more
3 people found this helpful
Helpful
Report abuse

D. A Butler
2.0 out of 5 stars Print on demand binding
Reviewed in the United States 🇺🇸 on November 4, 2022
Verified Purchase
I appreciated having a hardcover of this book but the binding is cheap and clearly a POD product and so I felt a bit cheated on quality.
Read more
Helpful
Report abuse

Doug
4.0 out of 5 stars Great adventure
Reviewed in the United States 🇺🇸 on October 20, 2022
This is Shackelton's own account of the journey. It was a good second book to read on the subject, but i would suggest reading "The Endurance" first. Shackelton didn't brag in his book and so underplays what he accomplished. The Endurance gives more of account of the entire journey
Read more
One person found this helpful
Helpful
Report abuse

FLAFarmer
5.0 out of 5 stars An Amazing Story
Reviewed in the United States 🇺🇸 on April 2, 2022
Verified Purchase
Shackleton was the man. He was totally boss. He brought his men back alive. This is his story. It’s one of the best books I’ve ever read.
Read more
One person found this helpful
Helpful
Report abuse
See all reviews
Report an issue
Does this item contain inappropriate content?
Report
Do you believe that this item violates a copyright?
Report
Does this item contain quality or formatting issues?
Report