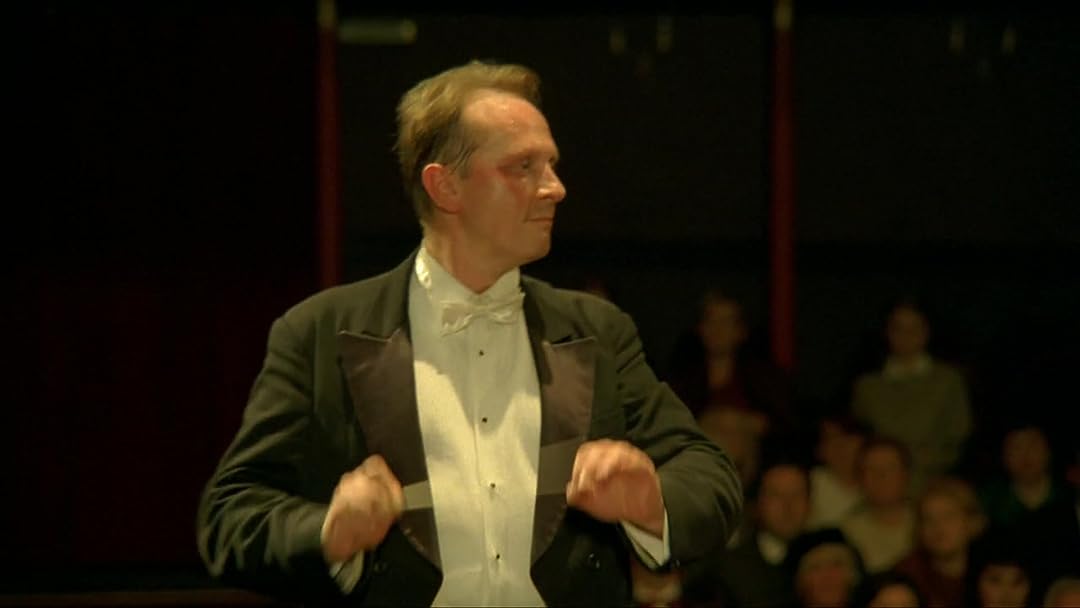 (117)
1 h 40 min200913+
Dr. Artur Planck and his family are seeking shelter from Germans storming Poland. They find a safe house in the farm of Emilia. Amidst the horrors of the war that surround them, an impossible love triangle erupts as Emelia uncontrollably falls in love with Artur. Such a fragile arrangement is sustained by love - or is it just the will to survive?

Lawrence RobertsReviewed in the United States on October 26, 2021
4.0 out of 5 stars
Its another Holocaust tragedy, be prepared, but do watch it
Verified purchase
I decided to give this 4 stars. The story was not particularly well told. It was not particularly believable, but since the Holocaust itself was horribly unbelievable, how can we know what people did to try to survive in such horrible cruelty and hopelessness? It was kind of an Anne Franck family story with a rather unusual twist of the person sheltering the family having her own ulterior motives. I found her to be not as cruel as her Nazi oppressors, but she did use their cruelty to blackmail the husband by threatening to sacrifice his Jewish wife and child to them to get what she wanted. She did not shelter the family out of goodness as a person, but to achieve her own goals. The Nazis, of course, were horrible. But, how can they ever be portrayed otherwise when we look at what they did, the inhumanity of what they did. There was a subplot – that the non Jewish Poles, even those who fought for Polish nationalism in the resistance, blamed the Jews for the invasion and destruction of their nation by Germany. This was also true in other nations subdued by Germany – in Czech Republic particularly. But it was not really developed in this movie. The complexity of the interpersonal relationships between the married Jewish couple and the former housekeeper who sheltered them took so much time and drama, there wasn’t room in the movie to develop that interesting, historically correct, and largely unappreciated subplot. The scenery was great, and the rustic farm and the village were photographed very well. The landscapes with the mist and the fog, and a colt happily prancing around and enjoying his childhood was a brilliant metaphor. The baby horse was enjoying his childhood and growing up healthy, but the little Jewish girl was trapped in an attic with no sunlight, no way to play or be playful, heartbroken over the loss of her sister, and so despondent she was ill. And the juxtaposition of misty, foggy, mornings, dark nights with the bright sunshine of daylight, and the Nazis marching Jews into a beautiful green, delightful forest to murder them was extremely well done. The beauty of nature almost seemed cruel in that world at that time, because these hopelessly oppressed people had only darkness and death in their lives even if they were in a beautiful, sunny, pastoral Polish countryside. I have two major complaints against the movie. The woman’s story about how she survived was simply unbelievable. Bullets pass through bodies – she would have been shot even if shielded by her husband. And the Nazi’s were merciless at continuing to shoot until there was no sound and no movement in the pits. And they bulldozed the earth in immediately. She could not have survived, nor been sheltered if she did – and that shelter was totally glossed over. The timeline for her to have a daughter as a doctor did not fit either. The movie took place in 1971. For this woman to have survived the war, found a new husband, and borne a child would have taken at least until 1947, or longer. College, medical school, and internship requires 9 to ten years beyond the age of 18. So, if she had a child in 1948 – there is no way that child was a practicing doctor in 1971. These are major flaws, and maybe 4 stars is too high. And, I know so many of us are tired of hearing yet another Holocaust story. And having the guilt of something that neither we, nor our nation, nor our society had anything to do with, in fact, had a great deal to do with combatting and exposing it. Yet, it was so horrible, that maybe we should always have that guilt shoved at us. When I see the vitriol, anger, and supremacist movements growing, almost erupting today – yes, it can happen again. It can happen here. We can never feel enough guilt over it – and we must recognize the signs of its formative stages.
12 people found this helpful

StraubingReviewed in the United States on September 22, 2019
5.0 out of 5 stars
Many tears, a story from before the camps
Verified purchase
A contemporary American viewer may not recognize or empathize with the behaviors exhibited in the movie, but I find these characters true to form. My mother was from a Bavarian farming family and I found nothing out of character with the peasants shown in the movie. They reminded me of my own relatives. My dentist was a Holocaust survivor (I grew up on army bases in Germany) and she used to relate her WWII experiences to me as I sat in the dentist's chair. I can still shed tears for the people whom I knew who lived through those terrible times, all of them gone, now. The photography is beautiful, the scarlet poppies and aqua fields, the different color eyes, hair, and skin tones.
15 people found this helpful

N. De SapioReviewed in the United States on September 27, 2016
4.0 out of 5 stars
An Underrated Movie
Verified purchase
I admit it: the English actor Joseph Fiennes was the main reason I became curious enough about SPRING 1941 to order a copy. Having loved Mr. Fiennes in the movies RISEN and LUTHER I was eager to see more of him, and indeed he does not disappoint in SPRING 1941. One of the most affecting actors around today, he gives an emotionally devastating performance as Jewish doctor Artur Plank, who in the spring of 1941 flees the Warsaw ghetto with his family, only to become romantically involved with the woman who hides them from the Nazis. With his tanned complexion Fiennes is not unconvincing physically as a Jewish man; the Polish accent he uses for the role sounds authentic and never falters.

Inevitably, viewers who have seen Roman Polanski's Oscar-winning Holocaust movie THE PIANIST will want to compare SPRING 1941 to it. There are undeniable similarities: both movies are about musicians (Szpilman in THE PIANIST, Artur's wife, Clara, in SPRING 1941); both movies are set in Poland. THE PIANIST, however, was a film with a large cast and a big budget, whose titular character was a real person; SPRING 1941, based on short stories, has a small cast and budget -- yet it uses its limited resources extremely well and never actually looks "made on the cheap." It is a classy, beautifully acted film with things to say about the Holocaust that are different than what THE PIANIST said or what SCHINDLER'S LIST said. Several scenes in SPRING 1941 are truly horrifying, and the movie as a whole will haunt you for days and weeks. My only complaint is that I believe more or better incidental music could have enhanced the drama.

lorraine blackReviewed in the United States on August 21, 2019
5.0 out of 5 stars
This is not one to miss.
Verified purchase
Trapped. . . They were all trapped. The Dr., his wife, and his child. Emelia who hid them was also trapped, in her own way. She hid them for her own selfish reason, knowing or believing that he still loved his wife and would return to her and his child. She held the wife and child as ransom. The Dr. would placate her till the end of the war just to save his wife and child. In time, Emelia demanded more than what was possible. This was a terrible war and a terrible injustice to so many. There were no winners. Those that survived had to live with the horrors of their memories.
8 people found this helpful

J. ALVINReviewed in the United States on June 24, 2018
5.0 out of 5 stars
Like the music that has been featured in the film
Verified purchase
The performances are riveting, Joseph Fiennes being one of the most underrated actors but who delivers in every role undertakes. There are harrowing scenes that jar the senses, gut wrenching and shocking. The inhumanity of the Nazis and their ilk may have killed the helpless Jewish men, women and children, along with the Poles who tried to help them, but the Jews have endured. their own humanity and dignity preserved. This is a powerful film, and a must see for those who value life, respect for others and their beliefs. Like the music that has been featured in the film, we are reminded that we must not allow prejudice, hate and inhumanity silence what makes man live and thrive in this world. The acting here is excellent and a tour de force of such immense talent which shows the pain, the anguish, the passion of its tragic characters in even just in their eyes,their stares, their almost empty helpless gazes which does not even need dialogue. The direction is also outstanding, as the drama did not just lie in the genocide sins. The drama in the farmhouse, of the triangle of tragic players, of the traumatized daughter able to only to speak when terrified, of their passions and human needs, make this film a true classic.
6 people found this helpful

BaucomReviewed in the United States on August 9, 2020
4.0 out of 5 stars
Great but he Prepared for Tears
Verified purchase
Clare Higgins who in my view always gives a great performance but doesn't really get the credit she deserves. Very sad movie but we must never forget the evil of that day even plagues us today. As the saying goes, history repeats itself
5 people found this helpful

Saoirse the dancerReviewed in the United States on September 4, 2021
5.0 out of 5 stars
Hard to watch
Verified purchase
If I didn't know the truth that leads to eternal life, I would be killed by this movie. The resurrection hope that Jesus spoke about at John 5:28&29 assures us that those who suffered so cruelly will be brought back to life in Jehovah's new world to come.
2 people found this helpful

Speedy GrandmaReviewed in the United States on December 9, 2018
5.0 out of 5 stars
Totally intriguing and moving
Verified purchase
Totally intriguing and moving. Be prepared for a very sad story, but one that is realistic to the horror that was WWII for the Jewish people. It is a very different take, expressing the normally absurd choices many made just trying to stay alive. Very well done, and the acting was superb.
7 people found this helpful
See all reviews
Back to top
Get to Know Us
Make Money with Us
Amazon Payment Products
Let Us Help You
EnglishChoose a language for shopping. United StatesChoose a country/region for shopping.
© 1996-2022, Amazon.com, Inc. or its affiliates