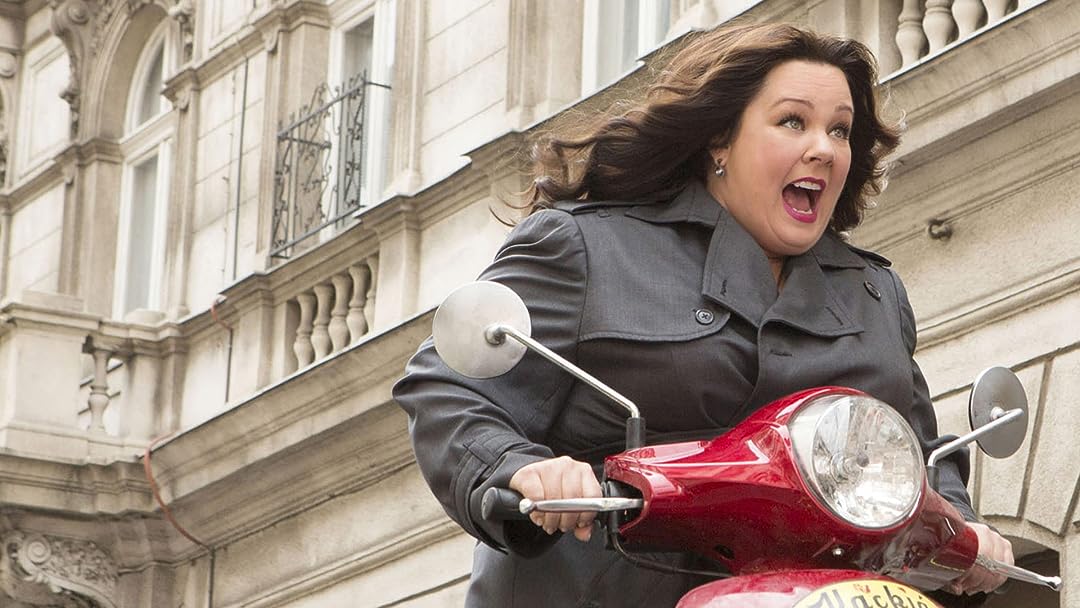 (18,102)
7.01 h 59 min2015X-RayHDRUHDR
Melissa McCarthy is armed and hilarious in this action-packed comedy about a deskbound CIA analyst who is about to become the world's newest — and unlikeliest — secret weapon!

Write Good ReviewsReviewed in the United States on December 26, 2018
1.0 out of 5 stars
Warning - see below
Verified purchase
Just so you know - There are literal pictures of male genitalia in this film.

The language I was overlooking, and then after a spy camera was "captured" they were reviewing the pictures for intel and there were multiple pictures of a character taking selfies of his junk... and it wasn't just 1, it was multiple. I just don't understand why this was put into the movie.

So... parents just be aware of this and honestly I just feel tricked into seeing this, that's what is so irritating.

And no I didn't realize this was an unrated version, but I never expected to have pictures of someone's junk spread across the screen.

Just irritated that this rubbish makes it into movies on Amazon without warning.

JenniferReviewed in the United States on April 22, 2017
5.0 out of 5 stars
Hilarious and supremely likeable
Verified purchase
I usually dislike Melissa McCarthy movies because she ultimately ends up being the obnoxious fat person caricature and whose mere existence is supposed to be the funny part instead of an actually funny script, and this movie looked no different in all the trailers. However, my friend insisted this movie was different and recommended it to me multiple times before I gave in. I'm glad I did, because this movie is freaking hilarious. Melissa McCarthy gets to play an actual person who gets to be serious and sad and funny, and the situations she ends up in are all the more entertaining because of the realism of her character (i.e. throwing up after a fight - I laughed so hard I cried). She's great in this movie, and I love the fact that her character eventually ended up hitting all of those "spy character" cliches - the multiple love interests, the dramatic wardrobe changes, the cool car - without losing any of the humor aspect of the movie.

Jude Law was also funny as the quintessential smarmy Bond-type spy, although his accent slipped a few times, and Rose Byrne was great as well. The best support character, however, has to be the one played by Jason Statham, who somehow manages to play both with and against his normal action type in the same movie. This movie blends humor and action perfectly, with one never overwhelming the other, and makes for an extremely entertaining film that makes me laugh no matter how many times I watch it.
59 people found this helpful

KaroniReviewed in the United States on December 18, 2018
1.0 out of 5 stars
Foul Language Ruins Movie
Verified purchase
I really wanted to like this movie. I loved the premise, that a desk analyst could become a super spy and save the day. In my desire to like the movie, I overlooked all the implied fat jokes for a while...and the toilet humor...and the foul-mouthed obscenities. But after a while, they seemed to comprise the whole movie. I gave up halfway through. It's too bad, because it was an original idea that could have been terrific.
32 people found this helpful

Dix88Reviewed in the United States on May 5, 2020
5.0 out of 5 stars
Hilarious but for adults
Verified purchase
My husband & I love loony comedies (like all the Will Ferrell films). This is in the top 10 of our favorite comedies.
I do agree with others here that the "crotch shot" was not necessary & a bit much. Otherwise, the entire movie was Hilarious. And the F*** word is oft-spoken, so if you don't like that, maybe be fore-warned. I am not the biggest fan of the F*** word, as it is usually overused. But it's just done for laughs in this film.
Seeing Jude Law as a Bond character, suave & able to fight off 100s of bad guys (with Melissa McCarthy's character in his ear to warn him) was so much fun. His scenes with Melissa (out to dinner etc.) were very sweet. The twist with him (no spoilers) was a shock & fun. It's great to see such a capable, talented straight actor doing a wild comedy. I hope he'll get more roles in comedies.
Melissa is one of the best comic actors of all time. I'm going way back to Laurel & Hardy, that era. She does amazing physical stuff, seems to be riffing crazy lines half the time. We have watched out-takes where everyone is mind blown by her improv'. She plays an "in the background" CIA agent who does all computer stuff until she volunteers to go "in the field." Since she's an unknown face (and others' covers have been blown), Alison Janney (her boss) sends her in.
Her character is actually well-trained & a great fighter but has just been a "Not Bond" type agent for years. When she goes all out in the field, she's amazing and too funny to describe.
An agent meets her in Rome (Aldo) & he is an absurdly wild, over the top "Italian lover" type. He is just so hilarious.
Rose Byrne is super as the gorgeous, evil enemy of Melissa's character. They work so well together.
We LOVE Bobby Cannavale in Anything and he is especially great as the suave bad-guy who gets done by Melissa.
Alison Janney is the "straight man" as the head of Melissa's CIA group. Anything she does is fantastic.
The crowning jewel is Jason Stratham who usually plays straight tough guy heroes. He is beyond belief as a bumbling, incapable agent who keeps showing up wherever Melissa's character goes. He keeps telling insanely wild tales about his exploits which get more & more unreal as the movie goes on.
The ending is satisfying, hilarious, sweet. Just what we wanted. We have bought the DVD so we can watch it again & again
The entire cast works so well together
13 people found this helpful

joel wingReviewed in the United States on August 4, 2022
4.0 out of 5 stars
Melissa McCarthy goes from girl behind the desk to foul mouthed secret agent
Verified purchase
I think Melissa McCarthy really shined in this film. She goes from the nerdy girl behind the desk that tells the secret agent what to do to being the secret agent out in the field. More importantly her attitude and foul mouth was completely unexpected and hilarious. Add to that Jason Statham acting like an idiot talking about using the Face Off machine to get a new face and then cursing out everyone around him and you have a winning combination. There are a lot of little special moments as well such as Miranda Hart being another girl behind the desk, Peter Serfinowicz playing a sex crazed Italian driver, Rose Byrne as a rude villain and more.
3 people found this helpful

Brenda L. PizzoReviewed in the United States on June 6, 2020
5.0 out of 5 stars
Melissa McCarthy is one Hilarious Spy
Verified purchase
This is a crazy, hilarious and smart comedy. What makes this caper work so well is that you are in on the joke. Spy makes great fun of everything about espionage and McCarthy is a great foil. She’s a dedicated employee who works behind the scenes as the eyes of one of the top spies in the field played by Jude Law who she’s crazy mad in love with. Her banter with him is hilarious whether she’s having a dinner with him or telling him to duck from impending peril. Jude’s cover gets blown and McCarthy ends up going in the field where she is sent to Europe for field work but she takes her assignment to another level. The movie gets even funnier as Europe is lampooned. Miranda Hart also shines brightly.
6 people found this helpful

C. SzolcReviewed in the United States on August 15, 2022
4.0 out of 5 stars
Almost great
Verified purchase
The writing was solid, the acting was superior, and editing was very good. This is Matt Helm, not James Bond. If the gratuitous sexual and foul language were removed, this could be a memorable film. Most everyone played the satire straight and there were many moments of great fun. Too bad they went for the "mature" rating.
3 people found this helpful

GhostReviewed in the United States on November 16, 2022
5.0 out of 5 stars
Hilarious
Verified purchase
Hilarious premise, perfectly timed and executed comedic moments, and excellent casting for each character.

Normally, I think Melissa is grotesque because of the filth that comes out of her mouth (not because of the 5’2” frame carrying 250 lbs), but in this film, she hit a Home Run. In fact, I can’t think of an actress more perfect than her to play the lead. She starts off as a meek, accommodating character who is transformed into a fully-capable undercover agent (despite the ongoing funny mishaps…falling over on the top-heavy scooter with the roof while trying to pursue a criminal comes to mind).

Her side-kick / friend in the agency played by Miranda Hart also provides laugh after laugh and Jason Stratham overplays the tough-guy spy who seems to bungle every task while trying to maintain his cool-spy image so well that you will laugh at all of his scenes.

This is really well-done and highly recommended. Enjoy.
See all reviews
Back to top
Get to Know Us
Make Money with Us
Amazon Payment Products
Let Us Help You
EnglishChoose a language for shopping. United StatesChoose a country/region for shopping.
© 1996-2022, Amazon.com, Inc. or its affiliates