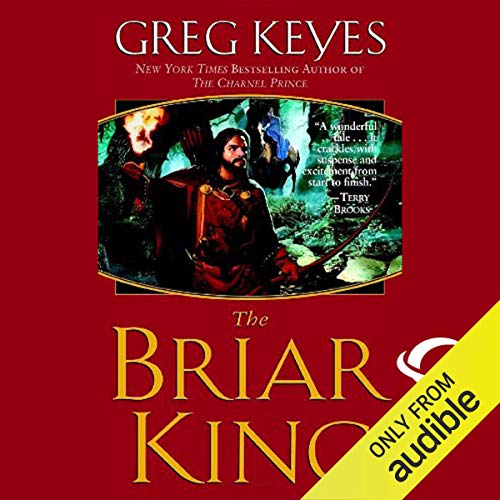 The Briar King: The Kingdoms of Thorn and Bone, Book 1

Two thousand years ago, the Born Queen defeated the Skasloi lords, freeing humans from the bitter yoke of slavery. But now monstrous creatures roam the land, and destinies become inextricably entangled in a drama of power and seduction. The king's woodsman, a rebellious girl, a young priest, a roguish adventurer, and a young man made suddenly into a knight all face malevolent forces that shake the foundations of the kingdom, even as the Briar King, legendary harbinger of death, awakens from his slumber.

At the heart of this many-layered tale is Anne Dare, youngest daughter of the royal family - upon whom the fate of her world may depend.

$5.95/mo for the first 4 months
For a limited-time, save over 60% on your first 4 months of Audible Premium Plus, and enjoy bestselling audiobooks, new releases, Originals, podcasts, and more. Get this deal

Your audiobook is waiting!
Learn more about membership
List Price: $24.95
You Save: $2.96 (12%)
By completing your purchase, you agree to Audible’s Conditions Of Use
Sold and delivered by Audible, an Amazon company
Share

Amazon Customer
5.0 out of 5 stars Great story... But my book was misprinted...
Reviewed in the United States on October 2, 2019
I love this story and would give it a 5 star rating. But as I read up to page 340, I realized that it stopped there. Seems the book was misprinted so I cannot continue the story.EDIT: Contacted Amazon via chat and the sent a new book out. Amazing!
Images in this review

Ronnae
5.0 out of 5 stars An Epic Tale
Reviewed in the United States 🇺🇸 on September 17, 2022
Verified Purchase
This epic novel which is the beginning of a series of books seems to weave fantasy, knowledge, and a little realism into one. It starts off introducing a bunch of characters that as they go along you find out who and where they figure into the story. But everything ends with you wondering what exactly is going to happen next. We have a prince whose a dunce and his mother queen trying to hold their kingdom together. You have a princess on the run from men trying to kill her and a knight trying to figure out how to keep his queen alive. You have a man of faith trying to figure out the whole riddle of what has happened and a kingsman of the forest trying to track down one man for the killing of his late wife. The other characters are all a big part of a larger story that involve a legend that no one seems to want to focus on. I can’t wait to read the next book to see what happens next.
Read more
Helpful
Report abuse

Jason
4.0 out of 5 stars A Stellar Beginning, But Not Perfect
Reviewed in the United States 🇺🇸 on October 19, 2010
Verified Purchase
The Briar King is book one of Greg Keyes's fantasy series The Kingdoms of Thorn and Bone. Keyes is not exactly a new voice in fantasy, having previously authored the well-received Age of Unreason series, which was a sort of historical fantasy. But the Briar King marks his first big splash. To put it simply, the Briar King is really good.

To start off, it's fair to note that a lot of the characters in the Briar King fall into typical fantasy prototypes: the rugged, gruff ranger, the stalwart, honest knight, the nerdy priest/mage, the rebellious princess, etc. Indeed, even the major plot arches - the jealous, evil Prince, the seditious Church - are standard fare. But all that being said, Keyes pulls off these fantasy norms with aplomb. The characters are, for the most part, very likable, very accessible and very sympathetic. The way I look at it, stereotypical fantasy characters are stereotypical for a reason - readers love them. A lot of authors come off as hackneyed, but Keyes really does pull it off.

The best part about the Briar King, though, is the world Keyes builds. Although based on medieval Europe, Keyes's world is deep and complex. It has a long, thorough history (which Keyes shares with the reader in bits and pieces). The politics are realistic and believable. And Keyes, an amateur linguist, ensures that the foreign languages used sound like actual languages. Indeed, the differences in language become vital at various times in the plot. Keyes's focus on language and world building results in a world that seems every bit as real as our own, even with the addition of magic and monsters. Keyes is also willing to kill of important characters. Some of the deaths were genuinely surprising. The fact that nobody is safe adds even more realism. I, for one, find it very frustrating to see characters constantly survive nearly impossible situations simply because the author refuses to kill anyone.

From a technical perspective, Keyes is a very good writer. His dialogue is snappy and realistic. The characters act in a logical way, even when they act unpredictably. The character development makes sense and never seems forced merely to advance the story. Keyes produces some beautiful prose but, for the most part, he keeps the descriptions simple and often vague. He gives you enough detail to visualize the world, but leaves enough to the imagination that the world becomes unique in your own thoughts.

The book isn't perfect, by any means. Keyes relies a little too much on random-never-before-discussed magic to get parties out of tough spots. It only happens a few times, but when it does happen, it's noticeable. Particularly because it plays a role in some parts of the novel's climax. Another minor complaint is that although Keyes typically limits each chapter to a third person narrative from one person's perspective, he occasionally jumps mid-chapter to another perspective, which can be a little confusing as it is not always immediately clear who the new perspective belongs to.

But overall, the Briar King is a really good book. I would recommend it to pretty much any fantasy reader. The book manages to be epic in scope without being epically large. Keyes creates a realistic, complex world without bogging the reader down in useless detail. The Briar King is definitely worth your time.

plantedbypiggies
4.0 out of 5 stars Fast and Fun Read
Reviewed in the United States 🇺🇸 on November 20, 2005
Verified Purchase
---THE PLOT---

It has been over two thousand years since the Born Queen led humanity in revolt against their Skasloi overlords, and now her line rules the Crotheny Empire. However, an ancient evil has once again awoken in the King's forest, and antique forbidden magicks are resurfacing. Also, there is a betrayer stalks the halls of the Castle Eslen who would do away with all those who stand against him.

The world of Everon has balanced on the edge of a terrifying abyss for millennia, and the inexorable slide into the maw has begun.

I read The Briar King soon after it was first published in 2003 after my interest in Mr. Keyes had been sparked by his books in the Star Wars New Jedi Order series. I remember thinking that the novel was excellent, but I moved onto other things and never followed up with The Charnel Prince. I was reminded of the series again, and I thought it would actually be a good book to own (I had borrowed it from the library). So, I ordered them and just finished rereading The Briar King. Sure enough, it was as enjoyable as I had remembered from the first time around.

One thing I enjoy about the novel is the quickness of the pacing and the quickness of the action. The descriptiveness is just enough to convey the fullness of the world, but it does not beat details to a needless death. It is by no means a "classic" or an "art" novel, but the story is enjoyable and moves quickly enough. It is a perfect fantasy for relaxing between term papers and as a "lunch break" book.

My favorite character in the whole series is Stephen Darige. I think he gets some of the funniest lines in the whole book, and it really is fascinating to see how he reacts when he discovers the cancer that is rotting the heart of the church. A close second is Anne, but her character did not develop as much as Stephen's, so I will have to reserve my final analysis on her until the series is completed.

I also like that Mr. Keyes does not insult his readers by giving them all of the history in one massive information dump. Rather, he gives enough clues and hints to guide the reader to the truth behind Everon's convoluted past. In fact, I'm surprised that I've not read any review anywhere that looks at WHO Genia Dare is in relation to American and British history. It's one of the best kept open secrets of the series so far.

If it were a movie, The Briar King would most definitely earn a PG-13 rating for language and also romantic situations. However, both of these are handled well and also make sense in the context of the story.

All in all, The Briar King is a fun read that is highly recommended. I just wish that they had chosen to stay with the original edition's cover art rather than deciding to commission Stephen Youll to totally change the design to something less appealing.
Read more
One person found this helpful
Helpful
Report abuse
See all reviews

Bunnychick
1.0 out of 5 stars Awful couldn't get past first 50 pages.
Reviewed in the United Kingdom 🇬🇧 on December 20, 2014
Verified Purchase
I bought this as it was recommended for fans of A Song of Ice and Fire and was very disappointed. Full of cliches and ridiculous characters all written in from an obvious male fantasy view point. Pure rubbish.
Read more
One person found this helpful
Report abuse

Kindle Customer
5.0 out of 5 stars the briar king
Reviewed in the United Kingdom 🇬🇧 on July 10, 2013
Verified Purchase
The start of a very absorbing fantasy adventure. Well worth the money.Once i read this first book I was hooked.
Read more
Report abuse