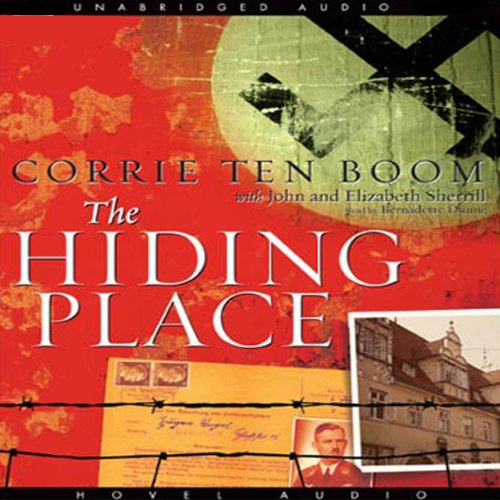 Corrie ten Boom (Author), Bernadette Dunne (Narrator), christianaudio.com (Publisher) & 0 more
4.9 out of 5 stars 10,888 ratings
See all formats and editions
Sorry, there was a problem loading this page. Try again.
Corrie ten Boom was a Dutch watchmaker who became a heroine of the Resistance, a survivor of Hitler's concentration camps, and one of the most remarkable evangelists of the 20h century.

In World War II she and her family risked their lives to help Jews and underground workers escape from the Nazi's, and for their work they were tested in the infamous Nazi death camps. Only Corrie among her whole family survived to tell the story of how faith ultimately triumphs over evil. Here is the riveting account of how Corrie and her family were able to save many of God's chosen people.

For 35 years millions have seen that there is no pit so deep that God's love in not deeper still. Now The Hiding Place, repackaged for a new generation of readers, continue to declare that God's love will overcome, heal and restore.

Your audiobook is waiting!
Learn more about membership
List Price: $24.49
You Save: $3.06 (12%)
By completing your purchase, you agree to Audible’s Conditions Of Use
Sold and delivered by Audible, an Amazon company
Share

Amazon Customer
1.0 out of 5 stars Bad binding on great book
Reviewed in the United States on February 18, 2019
The binding began to unravel before I was done reading the book. Best story ever, but I need a new book that will last!
Images in this review

M. J. Ford
5.0 out of 5 stars Not I but Christ
Reviewed in the United States 🇺🇸 on September 24, 2022
Verified Purchase
What was most poignant was Corrie’s and Betsie’s ability to see Christ instead of themselves while enduring Ravensbrook. Loved the book.
Read more
Helpful
Report abuse

Kathy Oen
5.0 out of 5 stars great item
Reviewed in the United States 🇺🇸 on September 25, 2022
Verified Purchase
was a birthday gift for my sister and she loved it
Read more
Helpful
Report abuse

wxbriefer
5.0 out of 5 stars A "Must Read" for today's youth.
Reviewed in the United States 🇺🇸 on August 31, 2022
Verified Purchase
It's been a while since I read this book. Felt the need to re-read it recently. Reminds you how evil can spread so quickly, how cruel humanity can be if you devalue a human life, and the awesome power of faith and prayer.
Read more
One person found this helpful
Helpful
Report abuse

Jamie
5.0 out of 5 stars Such courage
Reviewed in the United States 🇺🇸 on September 10, 2022
Verified Purchase
Love this book! The courage and stance on faith was amazing! I love that they didn't waver in what is right!
Read more
Helpful
Report abuse

Kim Westfall
5.0 out of 5 stars Inspiration
Reviewed in the United States 🇺🇸 on July 30, 2022
Verified Purchase
Few books have inspired me like The Hiding Place. Yes, it’s tough to read, traumatizing even, but the truths discover in these difficult pages will be with me for the rest of my life. Powerful reading. A true treasure.
Read more
2 people found this helpful
Helpful
Report abuse

Josie
5.0 out of 5 stars Beautiful story.
Reviewed in the United States 🇺🇸 on June 17, 2022
Verified Purchase
It felt like I really knew this family and their walk with Jesus. Corrie tells us how she really felt in those extreme moments of pure confusion, pain, and hardship.
She reacted the way many of us would. She made me realize that she isn't perfect but like everyone else. This story helped me see that even in our hardest moments, God said everything he plans is for our good. Even those dark trenches. He is everything we aren't. We aren't good and our hearts can be filled with so much resentment and hatred, but God can transform our minds and hearts as we continue to trust His love, His faithfulness, His correction, His wisdom, just Him.
Idk this book really touched my heart.

Sara N.
5.0 out of 5 stars Amazing testimony
Reviewed in the United States 🇺🇸 on July 25, 2022
Verified Purchase
Corrie Ten Boom’s testimony through this book was very amazing. There is no way to know how many souls were saved as a result of her story. What a blessing and help to so many people, during the war and for many years after. I LOVED the book.
Read more
2 people found this helpful
Helpful
Report abuse

Ferro
4.0 out of 5 stars One of the defining Christian books of the 70’s.
Reviewed in the United States 🇺🇸 on April 19, 2022
Verified Purchase
Corrie ten Boom, daughter of a Haarlem watchmaker, grows up in a devout Christian family. When the Nazis invade, they start to take in Jews fleeing persecution. Corrie and her sister find themselves in a concentration camp, where their faith is tested and they learn more about what it is to be a Christian in very difficult times.

The first part of the book recounts Corries childhood and early life in Haarlem. It is an idyllic portrait of a Christian family, with their daily bible-readings and peacefulness, but also their challenges and heartbreaks. This is to me the most enjoyable part of the book. Later in the prison camp, Corrie views her trials through the lens of faith, narrated with an engaging inner voice. She faces the age-old challenges every Christian struggles with: to hold onto resentment, or forgive? To view oneself as higher than you should. The only difference is, Corries tribulations take place to the daily backdrop of brutality and murder. Touching is the account of Betsie, her sister who leads the way in following Christs example of selflessness and forgiveness.

S. Perkins
5.0 out of 5 stars Brave and courageous
Reviewed in the United Kingdom 🇬🇧 on October 17, 2014
Verified Purchase
One of my favourite books.

The idea that such gentle people would be so brave and Christian to offer hiding places to fleeing Jews in WW2. I really admired their courage and tenacity.

The very elderly father could have been spared prison if he promised not to hide anymore Jews. His response was that he would not turn away anyone who came to him for help. The poor man died in prison.

Corrie and her sister were sent to a concentration camp were sadly her sister due to a long standing health problem exacerbated by the harsh conditions within the camp, died. Corrie although broken hearted carried on telling the other prisoners about God and her beliefs and was eventually released.

Jay M
5.0 out of 5 stars Faith, hope and love. The greatest of these is love.
Reviewed in the United Kingdom 🇬🇧 on August 28, 2021
Verified Purchase
It’s not the hardships that we face that matters as much as what we see and learn through it.
What an amazing family which had God’s perspective on life. I challenged to ask for the grace and ability to have such great love and to see through Christ’s perspective as the Ten Boom family did. Thank for Lord for helping them to endure to the end full of your love joy and peace. Victory belongs to Jesus.
Read more
Report abuse

Ann Turner
4.0 out of 5 stars What a story, and it's true!
Reviewed in the United Kingdom 🇬🇧 on June 9, 2014
Verified Purchase
If anyone had told me about this before I knew it was true I'd have struggled to believe it. But it IS true and one has heard and seen her speaking publicly of her experiences on tape and film, still available. If anyone needs inspiration or encouragement then read this, as it will stir you with the possibilities in your own life and maybe inspire you to be such an encouragement to others to live lives that are brilliant in their shining Jesus to others! Let's forgive as Corrie forgives which is just a shadow, as we know, of God's forgiveness of us! We're valuable to God as His ambassadors!
Read more
2 people found this helpful
Report abuse

Avid Reader
4.0 out of 5 stars truly inspiring story of a remarkable Christian family and their determination to help their jewish neighbours from the holocaus
Reviewed in the United Kingdom 🇬🇧 on February 1, 2014
Verified Purchase
I knew the story of the remarkable Connie ten Boom, but I hadn't ever read the book. I wanted my children to learn about this remarkable Christian family and particularly Connie's inspiring story. Easy to read but due to its content I think better for mature young children, maybe 10 years plus. It helps them understand about the frightening times for regular people during WW2 and how courageous some were in the face of evil. Highly recommended reading for adults and older children as an addition to Anne Frank's diary and aan important read for Christians.
Read more
Report abuse

BecciT
5.0 out of 5 stars Amazing
Reviewed in the United Kingdom 🇬🇧 on August 18, 2013
Verified Purchase
This book was recommended by the curate from my church. He and his wife had both read it and enjoyed it. I feel it was an interesting book on many levels. For me as a new Christian the faith elements were interesting, however so was the historical account of war time in Holland and the concentration camps. I think therefore that this book will appeal to Christians and non Christians alike.
Read more
One person found this helpful
Report abuse
See all reviews