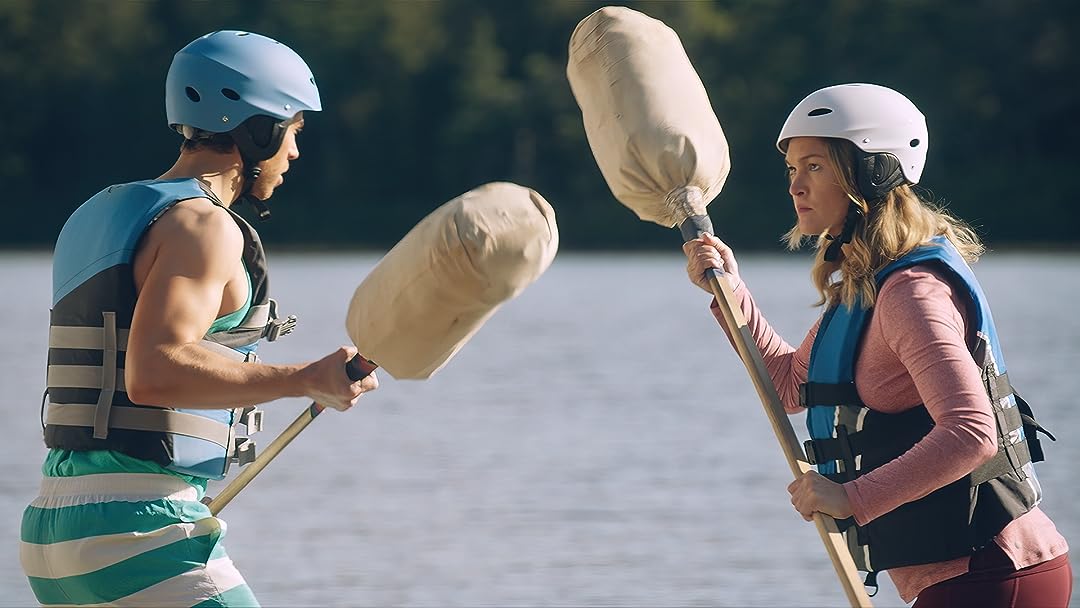 Season 1
(419)
6.22022X-RayHDRUHD16+
A biting comedy with Jordan Gavaris, Julia Stiles and Madison Shamoun. After a divorce leaves Justin’s life in disarray, he must pick-up the pieces. This includes reconnecting with Billie, the daughter he gave up for adoption. Justin hopes summer at the lake will bring them closer. It does the opposite until they team up to take back the family cottage from Justin’s step-sister Maisy-May.

tajmahalchicReviewed in the United States on June 18, 2022
1.0 out of 5 stars
not worth it
the main character gay man is annoyingly distracting and ruins what would have been a good plot. too many sexual innuendos too. poor dialogue
109 people found this helpful

Roger Reviewed in the United States on June 17, 2022
1.0 out of 5 stars
Trailer was great, I really wanted to like it
Made it about 12 - 15 minutes in and turned it off. It was contrived and was not funny at all.
I was really looking forward to it. I love Julia Stiles. This show does not work for her or any other cast
member. Acting was bad.

Ryan David BrownReviewed in the United States on June 17, 2022
5.0 out of 5 stars
Iconic!
Already want another season! Bingeworthy! If you like Schitts Creek you will love this!😍
59 people found this helpful

wrenReviewed in the United States on June 17, 2022
1.0 out of 5 stars
stupid
not funny at all
58 people found this helpful

EReviewed in the United States on June 17, 2022
2.0 out of 5 stars
Not good
So great to see Julia Stiles! Love her, as always, and she looks fantastic.

And that's where the good news ends. This isn't remotely believable, primarily because the main character is is a ridiculous caricature of a gay man. It's distracting and ruins the show for me.
56 people found this helpful

michelle avenosoReviewed in the United States on June 18, 2022
5.0 out of 5 stars
Binge Worthy with Characters to LOVe!
We thought this looked interesting - "cute"! & "Fun"! - and only intended to watch part of the first episode while waiting for a break in the weather, but even when it cleared 25 minutes in, we had to keep going! At the end of each episode we would look at each other & nod! Watched the WHOLE SEASON IN ONE SITTING!

The scenery is Beautiful! The characters are Fun & Charming & Kooky & Wicked (one or 2)! Each episode is a slightly different take on this physical & emotional comedy journey.

Cannot WAIT for Season 2!! Please, AMAZON! Take another chance! Film for another month & come back with another delightful, uniting season that makes us feel there is some Hope & Good Finally left in this world!

SherrilLynnReviewed in the United States on June 17, 2022
5.0 out of 5 stars
Good for summer watching
Lovely summer series for after sun & fun.
36 people found this helpful

Bo's DadReviewed in the United States on June 25, 2022
1.0 out of 5 stars
Why series trailers have to lie -- horrible.
I was really excited to watch this from the trailer, and thought it would be like a modern day The Great Outdoors and really funny.

Within minutes the main actor goes on a long rant about ice cream as he is trying to pick one out on why all the flavors are offensive, but it is not funny.

The store clerk, a younger mountain man type asks the guy if he needs help, to which he then starts stumbling around suggesting it is something sexual and lustful that a man simply asks him a question if he needs help. There is nothing sexual about the way the man asks him or the interaction, but the young man starts acting like it is some kind of penthouse fantasy happening as his daughter is waiting outside by the car.

Shortly after he leaves the story, he and his daughter who he gave up for adoption, who he is spending the summer with go into a woke Olympics dialog, that once again it not funny or remotely believable.

The story line had a lot of promise, the young man is going back to his childhood lake area where he had lots of good memories. He rents a cabin that is humble for them to stay at and they go canoeing.

He sees his childhood lake house and wants to show his daughter so they go over to it. He tries to be funny, but fails miserably. He almost gets caught, and as he and his daughter flee, they come up onto the dad and his son who live there.

They then go to a lake party and he has run ins with people from the past, and the suggestion is that it is a bunch of old flashes from the past and people he is not impressed by and or had bad past experiences with, but that is not the primary thing that comes forth. The primary thing is once again all the woke Olympics, the writers seem to be more about pushing their life experiences of disappointments and frustrations with the world on to the audience than creating a show that is entertaining or enjoyable.

Like going to a movie, but instead of being able to watch it, next to you is a ex who is nagging none stop about the movie with unwanted commentary that is driving everyone around you nuts as much as it is you.

We tried to give this show a try, even enduring past the bad acting, the constant agenda pushing dialogue, even as the story line was not one we really cared to watch, but were willing to give it a try. But, the show got worse and worse.

Shows with these kinds of themes, such as Robin Williams in the Birdcage movie, had themes that were not really something we cared to watch, but we had to admit that it was good acting, a good story line and plot and was actually funny.

Sure they were pushing their views and agenda in it, but it was still something people no matter what their views could laugh at. This series, failed miserably in every way. Super sad as the story line could have been a huge hit, but forcing the agenda on the audience was put over creating a series with a different viewpoint and life experience that was entertaining, funny and enjoyable to watch.

Only made it 15 or 20 minutes into the first episode, no idea if it got better or not, but the first impressions say a lot. The creators of this show, put this out to start the show, not likely it gets any better.
35 people found this helpful
See all reviews
Back to top
Get to Know Us
Make Money with Us
Amazon Payment Products
Let Us Help You
EnglishChoose a language for shopping. United StatesChoose a country/region for shopping.
© 1996-2022, Amazon.com, Inc. or its affiliates