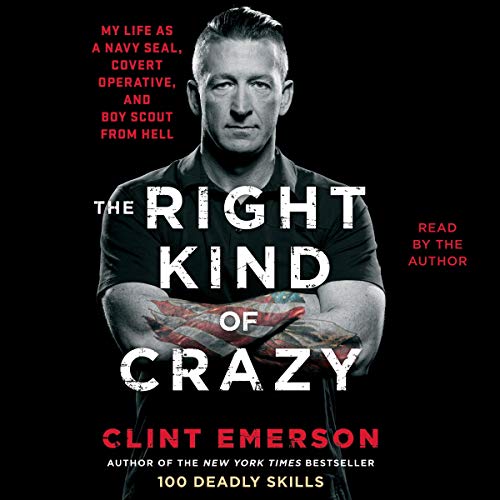 Clint Emerson, retired Navy SEAL and author of the best-selling 100 Deadly Skills presents an explosive, darkly funny, and often twisted account of being part of an elite clandestine team of covert operatives whose mission was to keep America safe by whatever means necessary. Just be happy he’s on our side.

Clint Emerson is the only SEAL ever inducted into the International Spy Museum. Operating from the shadows, with an instinct for running towards trouble, his unique skill set made him the perfect hybrid of elite and modern day counterintelligence agent.

Emerson spent his career on the bleeding edge of intelligence and operations, often specializing in solo missions that took advantage of subterfuge, improvisation, the best in recon and surveillance tech, and even elements of Hollywood disguise to combat the changing global battlefield. MacGyvering everyday objects into working spyware was routine, and fellow SEALs referred to his top-secret activities simply as “special shit.” His parameters were: find, fix, and finish - and of course, leave no trace.

While Emerson was a real life Jason Bourne as well as a decorated soldier, he operated by only two codes: “if you aren’t cheating, you aren’t trying” and “it’s only illegal if you get caught.” The Right Kind of Crazy is unlike any military memoir you’ve ever read because Emerson is upfront about the fact that what makes you a great soldier and sometimes hero doesn’t always make you the best guy - but it does make for damn good stories.

Your audiobook is waiting!
Learn more about membership
List Price: $17.00
You Save: $2.12 (12%)
By completing your purchase, you agree to Audible’s Conditions Of Use
Sold and delivered by Audible, an Amazon company

Amazon Customer
4.0 out of 5 stars For people on the fence
Reviewed in the United States on May 15, 2022
Putting this review up for people like me who weren’t sure about purchasing this book due to the negative reviews about allegedly heavy redaction and the book’s display of inappropriate behavior of SEALS. Out of the 275+ pages in this book, only a small handful of them contain redaction. And personally I appreciate the author’s over sharing about his experiences in the SOCOM community, especially as a team dude, even the stuff that’s awful to read, because at least someone is willing to talk about it. Simply makes for an interesting memoir. No great historical non-fiction volume or epic war hero biography, just a team dude sharing his personal experiences. Sorry for the run-on, hope this helps.
Images in this review

Russ H.
5.0 out of 5 stars Very entertaining
Reviewed in the United States 🇺🇸 on November 29, 2022
Verified Purchase
Very well written. This book is serious to funny in 3.2 seconds. Well worth the effort to read.
Read more
Helpful
Report abuse

Joseph J. TruncaleTop Contributor: Boxing
TOP 100 REVIEWERVINE VOICE
5.0 out of 5 stars A realistic, earthy and raw biography of a retired U.S. Navy SEAL that I loved reading.
Reviewed in the United States 🇺🇸 on June 23, 2021
Verified Purchase
Having read this author’s previous book (100 deadly skills: Survival Edition), which I loved, when I saw this 295 page soft cover volume (The right kind of crazy: My life as a Navy SEAL, covert operative and boy scout from hell by Clint Emerson) on Amazon I just had to buy it.

As soon as I received this book I began reading it and could not put it down. I loved it. It is an action packed true story of Clint Emerson filled with fascinating stories about his adventurous and complex life. This book is about the "good, the bad and the ugly" life as a U.S. Navy SEAL. The raw realistic real world dialogue of the author makes for a fun read. It also has several fantastic illustrations which I loved.

If you like the raw and honest “tell it like it really is” approach in writing a true life story this is a must book to read. It is not for the squeamish. I loved this book.
Rating: 5 Stars. Joseph J. Truncale (Author: Tactical Principles of the most effective Combatives Systems).

Tara Brady
4.0 out of 5 stars Memorable, engaging story
Reviewed in the United States 🇺🇸 on April 13, 2022
Verified Purchase
For me, this book both demystified SEALs to an extent, while still cementing their status as upper echelon warriors. And the author's contributions to fighting the war on terror as an operative made for some fascinating story-telling.

I laughed and cringed in equal measure (overweight SEAL on a bucket; will never unsee that). The writing was conversational and quotable, full of funny tidbits I can only describe as "Clint-isms" (i.e. Kremlin-sponsored retirement party; that one was in the epilogue, but there were so many others. It's just the freshest on my mind).

I thought it would take me longer to read this book, but the story kept me turning pages. I'm probably going to check out his "100 skills" books now and fantasize about wiping out dangerous criminals as a violent nomad.
Read more
Helpful
Report abuse

Amazon Customer
4.0 out of 5 stars Kinda disappointing. I was hoping (I confess) for more blood and guts.
Reviewed in the United States 🇺🇸 on April 4, 2022
Verified Purchase
I'm sure he's crazy, there's just not that much evidence of it in the book.
Read more
Helpful
Report abuse

Jacob Goodrich
5.0 out of 5 stars Great Read
Reviewed in the United States 🇺🇸 on May 12, 2022
Verified Purchase
Can’t say enough good things about this book. It was a captivating account if Clint Emerson’s life and gives us an insight to the events that made him into the Author and man he is today.
Read more
Helpful
Report abuse

Brian
5.0 out of 5 stars Excellent read
Reviewed in the United States 🇺🇸 on November 14, 2019
Verified Purchase
Fantastic! If you love 100 Deadly Skills (either edition) or his predecessor book Escape the Wolf, you'll have undoubtedly wondered about the SEAL behind the pages, his bio, his actual name, etc. And you mind find yourself stalking him on Instagram for entertaining content. This is Clint's story. Although several sets of genitals were harmed along the way, and you'll find the liberal use of the F bomb as a verb, adjective, and noun, it's a super great read. It might not make the Accelerated Reader list at your child's school, but The Right Kind of Crazy will give you a healthy dose of life led by someone with motivation and persistence. I thoroughly enjoyed it and was a bit sad to come to the end. It left me wondering why I too hadn't been an operator instead opting for such ridiculous notions as graduate school! I can't seem to scroll back up and proof read what I've tapped out on my smartphone so BLUF: buy the book and read it cover to cover. Then go make a sugar cookie.
Read more
18 people found this helpful
Helpful
Report abuse

chief
5.0 out of 5 stars bad ass
Reviewed in the United States 🇺🇸 on March 24, 2022
Verified Purchase
i really enjoyed this book. all i can say is that this is not your typical seal book.
Read more
Helpful
Report abuse
See all reviews

Mr. Mj Cotton
2.0 out of 5 stars Bit of a waste of money - better books out there than this
Reviewed in the United Kingdom 🇬🇧 on December 6, 2019
Verified Purchase
The book is heavily redacted - why release a book that is so difficult to read as most of the content has been redacted. As mentioned previously, other authors who have done more have less content redacted that this book. Doesn't mention anything about his time in DEVGRU. Other books such as No Easy Day and The Operator are a far better and more interesting read with no redaction. He also writes about Mark Owen (The author of No Easy Day) which there seems to be some bitterness towards him, maybe a hint of jealousy. The book also has drawings in it which I thought was short changing the reader. Most books the author will put in proper photos of the things he's writing about...If I wanted drawings, I would have bought a comic!...
Read more
2 people found this helpful
Report abuse

John
3.0 out of 5 stars Average
Reviewed in the United Kingdom 🇬🇧 on August 19, 2020
Verified Purchase
Not the best book of its genre. So heavily redacted you don't actually learn anything. Had to force myself to finish it. Shame.
Read more
One person found this helpful
Report abuse

Jean-Christophe
4.0 out of 5 stars Great book for those interested in the security world
Reviewed in Canada 🇨🇦 on February 11, 2021
Verified Purchase
I liked the book, even if there were some passages that were less interesting for me, but that doesn't make it less good. It's even more interesting given that the author, Clint Emerson, still works in security, write books, makes videos, and a lot more, so that makes him a reliable source of information.
Read more
One person found this helpful
Report abuse

Dini
5.0 out of 5 stars Irreverent, funny, crude and shocking
Reviewed in Australia 🇦🇺 on July 16, 2022
Verified Purchase
If you’re looking for the quintessential SEAL autobiography, this isn’t for you. 20 years in special forces has taken its toll and Clint’s writing is often cynical and exasperated but also funny and self deprecating. He’s brutally honest about his failings and owns responsibility for them. He’s certainly no angel but, if he was, would we really want to read the book?

The book doesn’t give away spy secrets or go into depth about SEAL operations. However, it gives an in depth look at Clint’s childhood and the behaviours and experiences that shaped him into who he is today. I think he’s walked a fine line in his deeds and was sensible to be good at being bad on the right side of the law!

I read this over several months. It’s easy to pick up and put down. I’ve re-read several parts and taken what I needed from them. The redacted commentary by Clint was some of the funniest bits. Definitely somebody you could imagine sitting around a fire with and being both horrified and enthralled by his stories.
Read more
Report abuse

Cate Allen
5.0 out of 5 stars Great read
Reviewed in Australia 🇦🇺 on October 3, 2022
Verified Purchase
A small look into the life of a navy seal. Very interesting read with Clint's twisted sense of humour thrown in - a great read
Read more
Report abuse
See all reviews