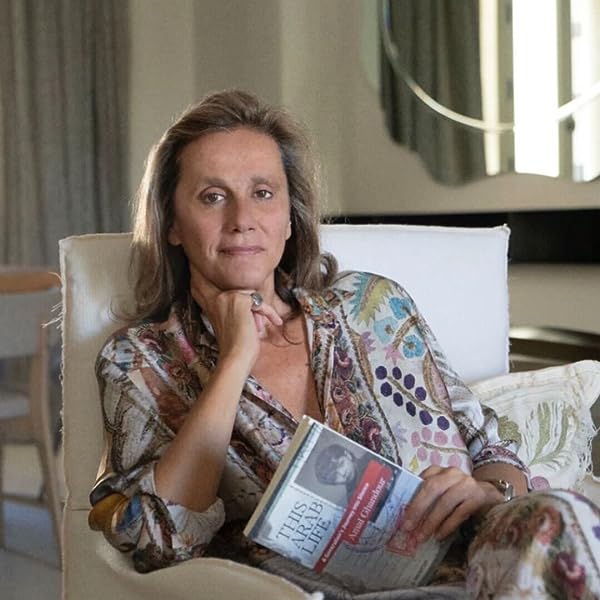 This Arab Life: A Generation’s Journey into Silence Paperback – September 8, 2022

by Amal Ghandour (Author)
5.0 out of 5 stars 8 ratings
See all formats and editions
Sorry, there was a problem loading this page. Try again.

This Arab Life is an intimate and honest exploration of a rising Arab generation’s descent into silence. Personal and panoramic, granular and sweeping, the book offers a raw account of the unremitting mire that anticipates the region’s present-day chaos.

In an unusual twist, the author, a daughter of the Levant who claims Jordan and Lebanon as her homes, locates her own privileged class in this painful history and holds a mirror to herself and her fellow travelers. In doing so, she threads a generational tale with grit, color, and nuance.

This Arab Life begins in Amman in the Summer of 1973 and concludes in Beirut in December 2021. But the narrative encompass a world by turns distant and faded, near and vital.
Read more
Previous page
Next page

Community development specialist and author Ghandour reflects on her life growing up amid the political tumult of the Middle East and her generation's response to it.
The author was born in Lebanon in 1962, but when she was only 5 months old, her family was compelled to flee the country for Jordan when her father, Ali, was sentenced to death by the Lebanese state for his alleged involvement in an attempted coup. She was raised in Amman and experienced a peculiar kind of stability in the wake of its civil war, which finally settled into an "ugly memory." Still, there were always paroxysms of unrest—so many, in fact, that they became nearly indistinguishable from the normal rhythms of life and led to a kind of acquiescent "atrophy," as the author puts it. Ghandour's experience was colored by her own privilege, which provided her family with a means of escape and her with an education in the United States that afforded her a taste of "unencumbered aliveness." However, the author also tells of being plagued by the "listlessness" of a generation that came of "political age" in the 1980s but had allowed itself to be silenced—a predicament that Ghandour affectingly portrays in these pages. Specifically, her account includes an astute interpretation of the uprisings that roiled the Arab world in 2011—the shock of their promise as well as their disappointments: "I don't know if my generation understood the meaning of what we saw...or if we knew, were at a loss about our options, and so decided to sell out." Over the course of this memoir, her prose is poetically precise and as sharp as her encounter with cultural and philosophical ambivalence permits. Overall, this is a disarmingly candid memoir in which Ghandour takes herself and her entire generation to task for the manner in which they may have been complicit in the Arab world's political failures. As such, it's a gripping remembrance and one that's as clear as it is dramatic.
An unflinching depiction of an author's complex international experiences.
-
Kirkus Reviews

"Unsparing of herself as 'informant,' in a book that is at once painful and a delight to read, Amal Ghandour probes the conscience and circumstances of a small but very influential section of Arab society. Stylish, witty, and heartbreaking, this is a unique and critical contribution to our current soul-searching."
—Ahdaf Soueif is a novelist, an essayist, and an activist

"Amal Ghandour has written a nostalgic book with glimmers of brilliant personal, social and political observations and probing about Jordan and Lebanon, about wars and longings, about a rich life of upheavals and laments."
—Raja Shehadeh, Palestinian writer and lawyer, and founder of the human rights organization
Al-Haq

"This Arab Life is a sweeping retrospective on a generation's historic complicity in the present travails plaguing the Arab world. The book is, at once, intimate, far-reaching, political, angry, melancholic, funny, and nostalgic. Ghandour's reflections on her life, and on the decisions taken by her and her peers as they came of age in the eighties and nineties, offers important insight for anyone seeking to understand how we got to where we are today in the region. The book is a cautionary tale of political acquiescence, and one that is, like many Arabs, stuck between an urgent impulse to act, to change, to hope, alongside an overwhelming sense of despair and apathy."
—Tareq Baconi, author of Hamas Contained: The Rise and Pacification of Palestinian Resistance and president of the board of al-Shabaka: The Palestinian Policy Network.

"The Arab world hasn't fallen into silence. It has descended, not unlike other parts of the globe, into a logorrhea of reflexive grumbling, vacuous politics, and hopeless nostalgia. Amal Ghandour's voice pierces through this noise: analytic, female, rebellious, acid yet soothing, if only because so much of the corrosion she describes is just begging for her brand of intellectual rust remover. Amal taunts the very elites she belongs to with questions few of the privileged ever ask themselves: Wealth aside, what is our worth? Who are we, as an elite, if we do little more than indulge and free-ride? Her own answers rise from a unique blend of acute insights, touching vignettes, and downright introspection, all caught up in the region's traumatic historical arc, and bound together by Amal's ever so tight, elegant style."
—Peter Harling, founder of Synaps, a public interest research Institute

Amal Ghandour's career spans more than three decades in the fields of research, communication, and community development. She is the author of About This Man Called Ali. Ghandour holds an MS in International Policy from Stanford University.

Amal Ghandour is a Lebanese-Jordanian author and blogger (Thinking Fits), with a career that spans more than three decades in the fields of research, communication, and community development. Her book, About This Man Called Ali (2009), was named the first biography of a modern Arab artist by the renowned Historian Philip Mansel.

Ghandour describes her new book, This Arab Life, A Generation’s Journey Into Silence (October 11, 2022), “as a memoir that is not of an individual but of the generation that came of political age in the 1980s in the Levant.” This Arab Life, she adds, “is an intimate rendition of the times that shaped us; the way we internalized our parents’ myriad dejections and disappointments; the pragmatism and silence that defined us; and the dispiriting inheritance we inexorably bequeathed our own children.”

Ghandour holds an MS in International Policy from Stanford University and a BSFS from Georgetown University.

5.0 out of 5 stars
5 out of 5
8 global ratings
How customer reviews and ratings work

Rula Atalla
5.0 out of 5 stars A gripping memoir..
Reviewed in the United States 🇺🇸 on November 9, 2022
If you like the art of words then this is a masterpiece of a book for you. A political promenade through the eyes and ears of a young girl (and later a woman) in the eighties in the levantine Arab world.

Except….a promenade it is not.

Lived and observed from her eyes it is more of a roller coaster ride with watersheds that remain to this day as traumas in our collective memories. Yet the author is able to find moments, many moments, of happiness and gratitude. To live a normal life as if oblivious to the many changes in society that have been taking place around us ever since.

With the most observant intellectual acumen, she narrates to us the political landscape of the time. With lively anecdotes and mind bending prose she takes us with her on her introspective personal journey. Looming into the conversation is how complicit is her generation in allowing this social, cultural and political degeneration to unfold.
Read more
Helpful
Report abuse

Nour-Lyna
5.0 out of 5 stars The heart-wrenching yet heart-warming reality of being progressive Levantine impelled into silence
Reviewed in the United States 🇺🇸 on September 27, 2022
“I don’t know if my generation understood the meaning of what we saw, what we encountered and experienced, but were at a loss about our options, or if we knew exactly where it all was leading but were just sellouts, or if we knew, were at a loss about our options, and so decided to sell out.” This is how Amal Ghandour captures the heart-wrenching yet heart-warming reality of being a progressive Levantine Arab of her generation impelled into silence. The book takes us back in time to the last five decades, a critical period in the MENA region, ample with salient events, ones that shaped and still mold the entire political discourse in the region. When does power become so powerless in the face of tyrant Arab regimes? Where were Amal and her peers amid the political and socio-economic dichotomies happening in the MENA region?
Despite being a member of one of today’s younger generations, I found myself drawn to the narrative, identifying with several situations and conundrums of the Arab life I share and cherish. Amal enthrallingly assembles it in bits and pieces, drawing captivating crude images of what it means to be an Arab through anecdotes very much rooted in the Arab culture. For me, as an Algerian academic scholar at Harvard University, Amal’s educational parcours at the universities of Georgetown and Stanford, respectively, echoed questions of responsibility, change and action untangled with feelings of an uneasy unfamiliarity with the countries we fled. How can I channel substantial social change in my country? And in which direction should it be? Where should I start?
Read more
Helpful
Report abuse

J. Shepperd
5.0 out of 5 stars This is one of the most amazing books that I've ever read!
Reviewed in the United States 🇺🇸 on November 21, 2022
Verified Purchase
I highly recommend this book to readers who are curious, intelligent, and willing to learn about the Middle East, especially if you like your information in rich prose that is a pleasure to read. It is at once a personal and historical memoir of the Levant that takes us on a journey through one family and yet tells the story of many families. This book is to be celebrated! What an accomplishment.
Read more
Helpful
Report abuse
See all reviews

Ms. R. Rahim
5.0 out of 5 stars Dancing with nostalgia and hard reality
Reviewed in the United Kingdom 🇬🇧 on October 11, 2022
Verified Purchase
A heartbreakingly beautiful dance between bittersweet nostalgia and hard reality.
It boldly exposes the twisted and sad truth of the region all the while reverting back to visually lulling scenes of a naive past soaked in a sepia tone.
This book is a breath of fresh air.
Enjoy !
Read more
Report abuse
See all reviews