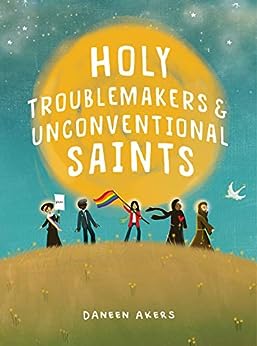 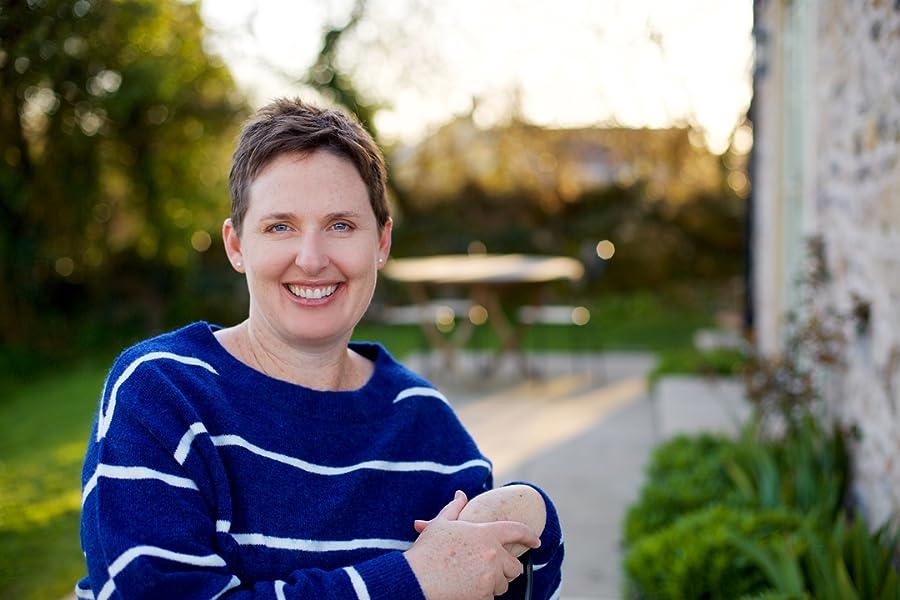 by Daneen Akers (Author) Format: Kindle Edition
See all formats and editions
Sorry, there was a problem loading this page. Try again.
"Holy Troublemakers & Unconventional Saints" is an illustrated children's book about people of diverse faiths working for more love and justice in their corners of the world, even when that means rocking the religious boat. With original portraits from more than two dozen artists and engaging profiles of people from different faiths and different eras, these are stories that inspire, educate, challenge, and encourage.

Some of the people featured in this book are well known, like the beloved St. Francis of Assisi (a favorite of Hufflepuffs everywhere for his love of animals), who gave up a wealthy inheritance to serve the poor, Rumi, the Sufi poet, and Thich Nhat Hanh the beloved teacher who developed the concept of engaged Buddhism. Some are well known, but the deep faith motivating their work is lesser known, such as Harriet Tubman, Florence Nightingale, and Mr. Rogers. Others are less known such as Bayard Rustin, an American Quaker whose role in the civil rights movement of the 1960s is often downplayed because he was a gay man; Maryam Molkara, an Iranian Muslim transgender rights advocate; and Regina Jonas, the first female rabbi to be ordained whose story was almost lost to history.

In particular, "Holy Troublemakers & Unconventional Saints" emphasizes the stories of women, LGBTQ people, people of color, Indigenous people, and others who are too often written out of religious narratives. These stories move us towards more love and a faith that works for the common good of us all.

"Holy Troublemakers & Unconventional Saints" is a middle-grade nonfiction (ages 8 and up) book.

“I love this project.” —Glennon Doyle, author of "Untamed" and "Love Warrior"

"This beautiful, inspiring, and inclusive book fills such a gap in our bookshelves." Sarah Bessey, author of "Jesus Feminist" and "Miracles and Other Reasonable Things"

“This book introduces kids to a wide array of spiritual leaders who believe in the power of revolutionary love. I'm thrilled my grandchildren will have a resource like this.” —Brian D. McLaren, author of "A New Kind of Christian" and "The Great Spiritual Migration"

“I haven’t been this excited about a children’s book in a long time.” —Kaitlin B. Curtice, author of "Native" and "Glory Happening"

"This book is so important. It would have helped me a lot growing up as a queer Christian kid if I'd had a book like at home." - Eliel Cruz, creator of #FaithfullyLGBT

This book is written by Daneen Akers, a writer, producer, teacher, and mother who believes deeply in the power of stories. Her past projects have explored faith, identity, and belonging. She is the mother of two girls who are the true inspiration for this book.
Read more
Previous page
Next page
Fire Tablets
Free Kindle Reading Apps
Available on these devices

Daneen Akers is a writer, documentary filmmaker, teacher, and mother who believes deeply in the power of stories. Her latest project is "Holy Troublemakers &amp; Unconventional Saints", an illustrated middle-grade anthology featuring original portraits and profiles of people of faith who worked for love and justice in their corner of the world, even if that rocked the religious boat.

Daneen was a part-time resident in the San Francisco Film Society's inaugural FilmHouse program and received the Pacific Pioneer Emerging Filmmaker Grant. She co-produced and directed several documentary films that focused on identity, faith, and belonging, especially as related to LGBTQ members of the conservative denomination she grew up in. She's a former English teacher with a graduate degree from San Francisco State University.

Daneen found that most of the books she’d read as a child that had anything to do with faith were not compatible with the type of faith she now has as an adult and parent. She knew she needed better stories for her own children, stories that help us transcend fears, connect with each other, engage in justice, and model an expansive and fully inclusive view of the Divine. She'd removed a lot of faith-based materials from her home that no longer fit, but she realized there weren't a lot of options for replacing those resources. As a storyteller, the clearest place for her to start adding back to their bookshelves was to tell stories about people of faith who have been motivated by a vision of a loving, just, and compassionate Divine, people whose faith works for the common good of us all.

Shirley Coling
5.0 out of 5 stars Prompt service - enjoying the book!
Reviewed in the United States 🇺🇸 on August 19, 2022
Verified Purchase
It is our new Sunday School class text. Class is open to all ages. I am a senior citizen.
Read more
Helpful
Report abuse

Teresa Boersig
1.0 out of 5 stars Incompatible for Kindle
Reviewed in the United States 🇺🇸 on February 2, 2021
Verified Purchase
The book may be lovely, but I'll never know. I was led to believe that it was formatted for my Kindle Fire, but it was not, so I could not see it or read it.
Read more
3 people found this helpful
Helpful
Report abuse

Joel McReynolds
5.0 out of 5 stars Diverse Stories to Inspire
Reviewed in the United States 🇺🇸 on August 18, 2020
As a child, my church’s library was full of books to inspire young Christian minds. There were books about famous Christians, and missionaries who sacrificed their lives, and youth-friendly biographies of theologians. However, as Daneen Akers points out in her preface, “These books often exclude the stories of women, LGBTQ people, people of color, disabled people, Indigenous people, and people from other faiths.”

In Holy Troublemakers & Unconventional Saints, Akers does an excellent job of bringing some of these excluded stories to light. While I had heard of some of the heroes Akers writes about, many were new to me. I learned a lot by reading this book and greatly enjoyed the writing. I don’t have kids, but I loved reading a profile or two every day and having the book sit on my coffee table.

Akers uses the profiles to introduce social justice concepts and history seamlessly into the stories. For example, she uses the profile on Gustavo Gutierrez to introduce readers to liberation theology and Bayard Rustin’s profile to explain the Civil Rights Movement and how to practice nonviolent protesting. There are highlighted vocabulary words throughout the pages, and you can look them up in the surprisingly thorough glossary at the end of the book.

The reading level is appropriate for middle schoolers, but you could easily read Holy Troublemakers & Unconventional Saints to a younger audience. Akers doesn’t gloss over the tough parts of history (slavery, colonization, war, etc.). Instead, she presents the stories in a way that will invite discussion and encourage curiosity rather than frighten children.

The book’s presentation is fantastic. Each profile includes a unique illustration of the unconventional saint, with additional highlighted quotes and drawings. The design is simple and effective, the cover is bright, the book itself is comfortable to hold, the pages are thick, and there is an attached ribbon bookmark.

Thoughtful, engaging, and absolutely vital for today, even if you don’t have kids I cannot recommend Holy Troublemakers & Unconventional Saints highly enough.

Disclaimer: I received this book free from the publisher through the Speakeasy blogging review network. I was not required to write a positive review. The opinions I have expressed are my own. I am disclosing this in accordance with the Federal Trade Commission’s 16 CFR, Part 255.
Read more
2 people found this helpful
Helpful
Report abuse

Kevin E. Ruffcorn
5.0 out of 5 stars Everyday Saints Inspire
Reviewed in the United States 🇺🇸 on September 8, 2020
Oftentimes saints are portrayed as larger than life. People like Mother Theresa, Nelson Mandela, Martin Luther King, and Bishop Oscar Romero inspire us. We are humbled by their life stories and accomplishments. We can never imagine, though, that we could be like them. Their greatness hinders us from being called to action.

Daneen Akers in her book, Holy Troublemakers and Unconventional Saints, provides an antidote for saintly greatness. Her book is full of everyday saints—people like you and me. Aker’s saints come in every shape and color. Some of her saints are gay, while most are straight. They come from countries around the world and from all walks of life. The thing that sets them apart is that they have allowed their faith to motivate them to use their talents to touch the lives of others.

Aker tells their stories in a clear, concise manner. Readers can identify with many of the saints in the pages of this book. The stories inspire, instruct and motivate. Through these stories, readers realize that the Spirit of God works in many ways and uses a variety of people. Ordinary people are used to share love and accomplish God’s will. The seed is planted in the readers’ minds that if God can use these saints, God can use the readers, also.

I think that this book can be especially useful for children. The diversity and commonality of the saints included in this book can spark their imaginations and creativity. I think both young and old will enjoy this book. Sit back and read about good people doing good things.

I received this book free from the author and/or publisher through the Speakeasy blogging book review network. I was not required to write a positive review. The opinions I have expressed are my own. I am disclosing this in accordance with the Federal Trade Commission’s 16 CFR, Part 255.
Read more
6 people found this helpful
Helpful
Report abuse

Kumar Dixit
5.0 out of 5 stars If you are going to lurk on Amazon, you should buy this book NOW.
Reviewed in the United States 🇺🇸 on April 10, 2021
I have always been a fan of reading about modern-day heroes. Unfortunately, the heroes are often from ancient days or lack diversity. In Holy Troublemakers and Unconventional Saints, Daneen Akers highlights some incredible leaders, some you may have heard of, and many you will be glad to discover.

This coffee table-styled book is filled with colorful illustrations and easy on the eye, but written in an easy-to-read, conversational style. There were numerous times around our dinner table where we selected a hero and read about their life. Each of these stories is encouraging and hopeful.

I was personally excited to read about some people I know, like, Brian McLaren, Valerie Kaur, Leslie Foster, and Jacqui Lewis. However, I learned about many more inspiring individuals, such as Danya Ruttenberg, Cindy Wang Brant, and Maryam Molkara.