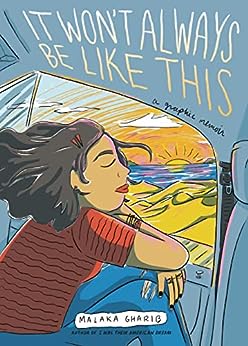 It Won't Always Be Like This: A Graphic Memoir Kindle Edition

by Malaka Gharib (Author) Format: Kindle Edition
See all formats and editions
Sorry, there was a problem loading this page. Try again.
An intimate graphic memoir about an American girl growing up with her Egyptian father's new family, forging unexpected bonds and navigating adolescence in an unfamiliar country—from the award-winning author of I Was Their American Dream.

“What a joy it is to read Malaka Gharib’s It Won’t Always Be Like This, to have your heart expertly broken and put back together within the space of a few panels, to have your wonder in the world restored by her electric mind.”—Mira Jacob, author of Good Talk: A Memoir in Conversations

It’s hard enough to figure out boys, beauty, and being cool when you’re young, but even harder when you’re in a country where you don’t understand the language, culture, or social norms.

Nine-year-old Malaka Gharib arrives in Egypt for her annual summer vacation abroad and assumes it'll be just like every other vacation she's spent at her dad's place in Cairo. But her father shares news that changes everything: He has remarried. Over the next fifteen years, as she visits her father's growing family summer after summer, Malaka must reevaluate her place in his life. All that on top of maintaining her coolness!

Malaka doesn't feel like she fits in when she visits her dad--she sticks out in Egypt and doesn't look anything like her fair-haired half siblings. But she adapts. She learns that Nirvana isn't as cool as Nancy Ajram, that there's nothing better than a Fanta and a melon-mint hookah, and that her new stepmother, Hala, isn't so different from Malaka herself.

It Won’t Always Be Like This is a touching time capsule of Gharib’s childhood memories—each summer a fleeting moment in time—and a powerful reflection on identity, relationships, values, family, and what happens when it all collides.
Read more
Previous page
Next page
Due to its large file size, this book may take longer to download
Kindle e-Readers
Fire Tablets
Fire Phones
Free Kindle Reading Apps
Available on these devices

“A delightful account capturing the highs and lows of shifting family dynamics . . . Malaka’s tenderness for her family and Egypt are heartwarming and genuine.”—Diana Abouali, Director, Arab American National Museum

“This is the book that’s been missing from my bookshelf. Gharib’s writing and illustrations made me laugh and cry and transported me back to some of the best days of my life in Egypt. This unforgettable graphic memoir is written from the heart.”—Aya Khalil, author of The Arabic Quilt

“Intimate and wide-open, It Won’t Always Be Like This is a coming-of-age comic imbued with the wisdom of a mature and powerful mind. Gharib is the real deal.”—Kristen Radtke, author of Seek You: A Journey Through American Loneliness

“Malaka Gharib recounts her teenage memories with an open heart and an eye for detail. It Won’t Always Be Like This is her best work yet. I wish everyone could write (and draw) about their lives with this much honesty, specificity, and warmth.”—Adrian Tomine, author of The Loneliness of the Long-Distance Cartoonist

“Gharib’s drawings are freehanded and energetic, with brightly detailed marketplaces, beach scenes, and cityscapes, peppered with excerpts from Gharib’s actual adolescent diaries. This work will resonate with any graphic novel memoir fan who felt like a fish out of water growing up, and promises teen crossover appeal.”—Publishers Weekly

Malaka Gharib is a writer, journalist, and cartoonist. She is the author of I Was Their American Dream: A Graphic Memoir, winner of an Arab American Book Award and named one of the best books of the year by NPR, The Washington Post, Kirkus Reviews, and the New York Public Library. By day, she works on NPR's science desk, covering the topic of global health and development. Her comics, zines, and writing have been published in NPR, Catapult, The Seventh Wave Magazine, The Nib, The Believer, and The New Yorker. She lives in Nashville with her husband, Darren, and her dog, Sheeboo. --This text refers to the paperback edition.

Malaka Gharib is a journalist at NPR. She is the author of "I Was Their American Dream," a graphic memoir (Clarkson Potter, April 2019) about being Filipino-Egyptian-American. She is the founder of The Runcible Spoon, a food zine, and the co-founder of the D.C. Art Book Fair. She lives in a rowhouse with her husband in Washington, D.C.

5.0 out of 5 stars
5 out of 5
9 global ratings
How customer reviews and ratings work

Amazon Customer
5.0 out of 5 stars A beautiful book about culture clashes and growing up
Reviewed in the United States 🇺🇸 on October 22, 2022
Verified Purchase
This book is beautiful and full of surprises… from Malaka’s teenage obsession with ska music, skateboarding, and zine making (a budding graphic novelist!) to her fascinating insights into her Egyptian father and stepmom’s marriage. The art looks effortless but conveys so much with a few simple lines. I found myself studying how she can convey so many emotions with little changes to the eyes or eyebrows or mouth. I just adored this book.
Read more
Helpful
Report abuse

Amazon customer
5.0 out of 5 stars Highly readable, poignant and loving
Reviewed in the United States 🇺🇸 on October 22, 2022
Verified Purchase
I discovered this graphic novel after getting a free sample at my local comic store. I loved reading Malaka’s story about her transnational upbringing, and the inner conflict + wisdom she eventually gained from her experiences with her Egyptian family.
Read more
Helpful
Report abuse

Paige G.
5.0 out of 5 stars book review
Reviewed in the United States 🇺🇸 on November 10, 2022
Disclaimer: I received this e-arc from the publisher. Thanks! All opinions are my own.

Explanation of Above: Divorce is a plot line of the book. There are mentions and showings of religion and modest culture, including scenes shaming the MC for what she is wearing. There is some slight cursing in the book. There is one scene of catcalling/sexual harassment and one scene of being groped/sexual assault.

Synopsis: It’s hard enough to figure out boys, beauty, and being cool when you’re young, but even harder when you’re in a country where you don’t understand the language, culture, or religion.

Nine-year-old Malaka Gharib arrives in Egypt for her annual summer vacation abroad and assumes it’ll be just like every other vacation she’s spent at her dad’s place in Cairo. But her father shares news that changes everything: He has remarried. Over the next fifteen years, as she visits her father’s growing family summer after summer, Malaka must reevaluate her place in his life. All that on top of maintaining her coolness!

Malaka doesn’t feel like she fits in when she visits her dad–she sticks out in Egypt and doesn’t look anything like her fair-haired half siblings. But she adapts. She learns that Nirvana isn’t as cool as Nancy Ajram, that there’s nothing better than a Fanta and a melon-mint hookah, that the desert is most beautiful at dawn, and that her new stepmother, Hala, isn’t so different from Malaka herself.

Review: I really liked this graphic novel memoir! I thought it was well done and it did well to show what growing up with divorced international parents is like. I liked seeing the juxtaposition of the MC’s American life vs her Egyptian life and I enjoyed seeing her insight and seeing how she grew throughout the novel, especially in the way her relationship grew with her stepmother. I think this would be a great book for children of divorce, especially those who have to travel a long way to see their non-custodial parent or children with new step parents. I thought the artwork was also well done, the character development amazing, and the world building great.

The only thing I had a bit of fault with is that the story just ends. It doesn’t have a resolution or anything and the author’s note mentions talking to Hala again, that she reviewed this story before it was published, but in the story itself she just kind of falls off the face of the Earth. I wish there was a bit more resolution with her.