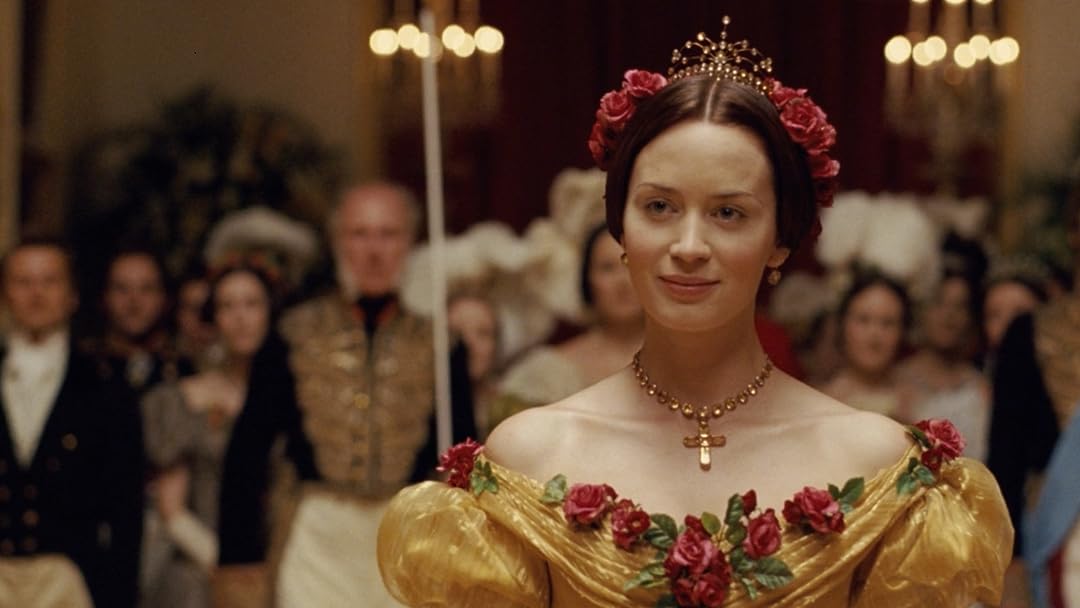 (5,731)
7.21 h 44 min2010X-RayPG
The only legitimate heir to the throne, teenage Victoria finds herself caught up in the political machinations of her family, navigating a controlling mother, a bullying consort, and a politically arranged marriage that turns into so much more.

SabbyReviewed in the United States on May 21, 2017
5.0 out of 5 stars
I gave it 5 stars even though...
Verified purchase
I loved everything - well, almost everything about this movie. The casting was great (Emily Blunt, Rupert Friend, Mark Strong, etc. - it doesn't get better than that). The story, the clothes, and Buckingham Palace were all great. My problem with the movie - stop lying about historical events because you think it will make the movie more interesting. What are you thinking? The truth is interesting - that's why we're watching (duh). So, when you take a significant historical event and lie about it's outcome, you completely discredit yourself and the movie (and you anger the audience into the bargain - is that really what you want?). I didn't think so.
53 people found this helpful

joel wingReviewed in the United States on January 13, 2021
4.0 out of 5 stars
Young queen wants to determine her own future
Verified purchase
Young Victoria is part court politics over the future of the young Queen Victoria (Emily Blunt) and part love story between her and Prince Albert (Rupert Friend). The movie starts when Victoria is still not an adult and everyone is trying to control her future. At one point she asks Albert if he felt like a chess piece in a game set up against him. The political part of the film is quite good while the Victoria-Albert relationship is romanticized. Overall the movie has a strong feminist theme of Victoria’s agency.

The first part of the movie is the best. People have all kinds of plans for Victoria, who she can and can’t see, where she can go, who she will marry, etc. She’s like a pawn for all the powerful men in England who want to control the future queen. The second parties focused upon her love affair with Prince Albert. The movie portrays it as a relationship that she chose and not one that was arranged. That opens the door for all the romance as they go for walks, riding together, etc. The message was that Victoria was a woman with her own mind that determined her own future and that comes through strongly.
C

neaReviewed in the United States on July 11, 2021
5.0 out of 5 stars
Maybe not completely accurate, leans a bit towards only the positive.
Verified purchase
There is no doubt that Victoria and Albert was a great love story, but as a Mother she got a D, if not an F. She didn't like pregnancy nor having children and she treated her children quite badly, they were not close once grown. Albert died so young he didn't really have a chance to show what he could do. But I have a feeling he was a guiding light for a very stubborn and not so bright queen. This was written by Jonathan Fellows, a through and through Brit, so there was much of her REAL life left out, especially the acrimony between she and her Mom. He played it safe, but then it is only a short movie that covers a much longer period of time, so to consolidate that he did a good job. I enjoyed the movie, and very much liked the casting. All of British history is so terribly political and so much evil done in the name of politics, even murder. I was not aware the Albert was shot during the attempt on her life. That was new to me, All in all a good movie and worth watching. I did a lot of research, AND I find no supporting evidence that he was ever shot....they added that for affect and drama.
3 people found this helpful

Robert HayesReviewed in the United States on March 20, 2015
5.0 out of 5 stars
The perils and pitfalls of being a young monarch
Verified purchase
One of the pitfalls that a lot of biopics fall into is that they try to do too much, e.g., telling someone's entire life story as opposed to a part of it. Thankfully, THE YOUNG VICTORIA avoids this mistake by choosing to focus on the early years of Queen Victoria's reign. The source of dramatic conflict is how, as a young monarch, she was pulled this way and that by advisors and politicians who were all vying for control and influence. Meanwhile, she finds a friend (and eventually, lover) in Prince Albert. One thing the film does really well is show the difficulty inherent in being a leader, especially when one is young and viewed as inexperienced. Emily Blunt pulls off the role admirably and shows the chops she would bring to later performances such as EDGE OF TOMORROW, although her character here is a little more vulnerable. I thought she showed both sides quite well. Rupert Friend also did a great job as Prince Albert, who provided much needed solace and counterpoint to Victoria. Mark Strong also did well as the slimy John Conroy, who pressured Victoria to establish a regency with her mother, the Duchess of Kent. Also worth noting is the excellent production design and costumes which faithfully (I assume) and beautifully reproduce Victorian England. There is also an incredible score and soundtrack with (mostly) period classical music. Put together, this creates a rather handsome period costume drama and romance that should appeal to a large swath of the movie-going public.
24 people found this helpful

Mama on the GoReviewed in the United States on January 22, 2010
5.0 out of 5 stars
Great film, mostly historically accurate
Verified purchase
I thoroughly enjoyed this film! Emily Blunt gave a stunning performance as Victoria, but Rupert Friend totally steals the show as Albert, in many ways a much more challenging role, I think. Albert was a complex, private person and his relationship with Victoria is all the more interesting, because while he dutifully pursued marriage with Victoria as his destined "career", he did not expect to fall in love or to be loved in their marriage. Friend does a marvelous job of portraying a very reserved, rational man suprised by his own powerful feelings, and of showing Albert's very dry but keen sense of humor. Many biographers/historians have suggested that Albert did not love Victoria as she did him, but I think this has much more to do with Albert's reserved, Germanic public persona than any historical reality, as is amply demonstrated in his letters and Victoria's journals. Friend does a marvelous job of revealing an Albert who loved Victoria deeply and was willing to make great sacrifices for her, but who also had the strength to stand up to her strong will and fiery temper, and not be pushed around. Both actors obviously did their homework on Victoria and Albert and I think very much captured the essence of their personalities. I also very much enjoyed Jim Broadbent and Harriet Walter's marvelous, feisty performances as King William and Queen Adelaide.

One aspect of the film I found a bit jarring was the portrayal of Victoria's relationship with King Leopold and Baron Stockmar as being rather distant and hostile. While Victoria was quite determined to live her own life and not be a pawn in their (or anyone else's) political schemes, she actually had a very affectionate relationship with her uncle Leopold both before and after her marriage, and Stockmar was a lifelong friend and confidant of both Victoria and Albert and helped them through many of their early marital difficulties. Their manipulative attitude toward Albert and their obsessive focus on grooming him for marriage to Victoria was historically accurate, and Rupert Friend's portrayal of the young Albert's attitude toward their "training" is one of the funniest parts of the film.

I highly recommend Stanley Weintraub's biographies of both Victoria and Albert for those wanting the real historical background for the film. Sarah Ferguson's book Victoria and Albert: Life at Osborne House is also a well-researched and beautifully illustrated book about their marriage and family life.

There is a bit of minor chronological rearrangement to cram about 5 years of historical material into less than 2 hours, for which I think Julian Fellowes can be easily forgiven, and some slight embellishment of real events for dramatic effect (eg Prince Albert did attempt to shield Victoria in the assassination attempt but was not actually shot, Albert was not present at Victoria's coronation) but I didn't find it detracted from the story. Much of the script is actually verbatim historical record (King William's drunken outburst at the banquet, Conroy's attempt to force Victoria to sign an order making him Regent) and Fellowes included these bits unaltered, to his credit--they are fabulously dramatic, just as they are.

Costuming is gorgeous and well-researched, the film is a visual treat. A real must-see!

MissPriss#1Reviewed in the United States on June 26, 2016
5.0 out of 5 stars
EMILY BLUNT IS SUPERB
Verified purchase
What a beautiful movie! I watched it several times and plan to purchase it eventually. I am a huge fan of period movies and I think Emily Blunt is one of our best young actresses today. She is SO versatile... I have never seen a movie of hers that I did not enjoy immensely. I enjoy the fact that she does not have to take her clothes off or use profanity to show how fine actress she is on her own!
25 people found this helpful

Kathryn Ulasavets Reviewed in the United States on June 28, 2022
5.0 out of 5 stars
THIS IS A GREAT MOVIE
Verified purchase
Idk this movie seems pretty underrated to me. It was great and interesting to watch. My kids enjoyed it. :)
3 people found this helpful

TafkaswfReviewed in the United States on May 5, 2020
5.0 out of 5 stars
A beautiful Palace Movie
Verified purchase
The Young Victoria is a beautifully filmed movie. The story line flows well and the characters are very well developed.

It really sheds a light on what Queen Victoria of the 1800s went through, as a young girl and then a young queen. It also shows what her future husband, Prince Albert, went through too. The greatness of this movie is that it makes all the palace intrigue, and all the royal families intrigue very interesting. You want to keep watching. Like Game of Thrones without all the violence and sex. And of course the palace scenes are ostentatious and beautiful.

My only word of advice is to have the family tree of English King George III up on your iphone or tablet as you watch this movie. The young Victoria was his granddaughter, and it's difficult to keep track of all the players - and understand the scheming - without a scorecard, i.e., the family tree of her Grandfather King George III.
See all reviews
Back to top
Get to Know Us
Make Money with Us
Amazon Payment Products
Let Us Help You
EnglishChoose a language for shopping. United StatesChoose a country/region for shopping.
© 1996-2022, Amazon.com, Inc. or its affiliates