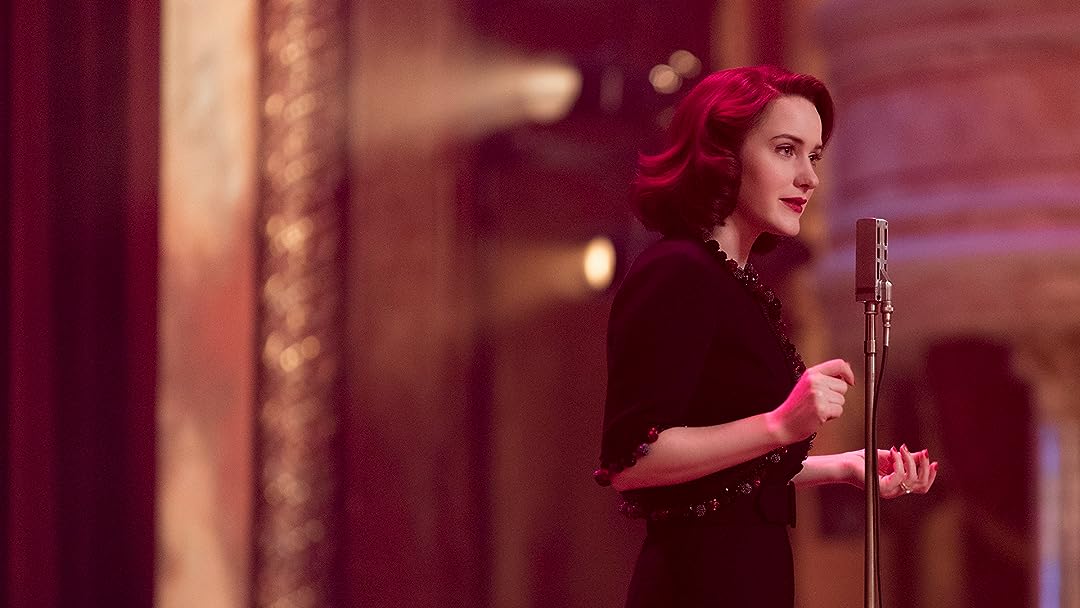 (1,404)
8.72022X-RayHDRUHDTV-MA
It's 1960 and change is in the air. Looking to hone her act, Midge finds a gig with total creative freedom. But her commitment to her craft and the places it takes her creates a rift between her and the family and friends around her.

Reza YousefiReviewed in the United States on February 19, 2022
1.0 out of 5 stars
My favorite show is ruined by liberals and feminist stupidity!
What has happened to the US, of course, happens to Hollywood too, or vice versa! This show was the reason I kept my prime membership with Amazon. Now, it is turning into feminist, so called progressive, aka liberal, stupidity and ignorance propaganda machine! It is not even carrying a story!
Sa sad! so much acting talent wasted on this sad story about the demise of US.
622 people found this helpful

Person With a POVReviewed in the United States on February 20, 2022
5.0 out of 5 stars
Tit's Up Ladies! If you don't remember the early 60's, Mrs. M will remind you.
A lot of people who are kvetching about season four being "feminist" don't realize (or maybe don't remember or weren't born yet) ~ THIS was the 1960's for women! It wasn't funny. It's a miracle that we get to see a glimpse of reality in a comedy.

Women today have the freedom to kvetch all day long BECAUSE the Mrs. Maisel's of the world had the fortitude to speak up and stand up during their time.

If anyone is threatened by it, then, you never walked a mile in the Village in her heals to make it to your next gig.

I really hope there is more.
421 people found this helpful

Nadja BretonReviewed in the United States on February 18, 2022
5.0 out of 5 stars
Tit's up...for all time!
Truth be told, even when the show fumbles with bad jokes, reiterates thematic content (dead-horse beating-style), pursues dead ends, and doesn't live up to that glorious first season, I still love it. Why? I love being immersed in this world so much that I'm willing to overlook the show's flaws and just focus on what makes it marvelous. And there is much that is marvelous! The characters, the actors, the humor (both bawdy and wholesome), the sets, the clothes and atmosphere--none of it is mere surface or ornament! The attention to detail is what makes this show feel so alive. That and the killer performances. Some of the actors are so hilarious they could get laughs reading a cereal box, and clearly the show deals with some important issues which are still hella relevant today. The show has timeless feel, despite some of the heavy-handed contemporary threads blatantly coming through (which is what will ultimately make it feel a bit dated in the future). Again, I've never been so invested in a TV character's journey that I'm willing to disregard the fluff and the shortcomings of the production itself. I'm stickler for quality and good writing. Mrs. Maisel has a lot of quality, quotable material, and pizazz for days. Happy to have two more seasons to stalk! Here's hoping Mrs. Maisel goes out with a bang!
372 people found this helpful

Brian ButzReviewed in the United States on February 18, 2022
4.0 out of 5 stars
Getting bored, but the season ends with great promise
I initially wrote this review after the first 2 episodes, and am now updating it. I'm leaving my original intact, and amending it at the end. This series started with great promise but no episode to date has lived up to the pilot episode. Season 4 so far doesn't look like it will deliver either. I feel stories are getting quite contrived to keep her from success and to keep her family conflicts relevant. Nothing has really changed in her life or goals since the end of season two. I feel the story should be about a lady who finds sucess by usurping gender roles and the patriarch, but it fails to deliver because she's never behaved in a maternal role and the men in her life may be jerks at times, but ultimately are decent. I feel many stories since the first season were contriving situations to keep the cast and crew employed rather than advancing the story. We're now 4 seasons in, and Midge is still waiting for her big break and mainstream success and acceptance. I think the lead actress is a brilliant comedian, despite not being one, but instead of seeing crazy showbiz stories from the road, we're seeing soap opera reasons for not seeing what makes this show good. Maisel is at it's best when she's thrashing gatekeepers with devastating wit, but we only see it every few episodes and her career never progresses. I feel the long term story arch should be about someone who gains it all through her brutal honesty only to lose it for the same reasons. What we have instead is a severely downscaled version of this in a repetitive loop that never goes anywhere. We're 4 seasons in, she's had some successes, yet she still can't get club gigs at places she's already killed at? I'd much rather see her in love triangles with the Rat Pack, or otherwise dealing with the madness of celebrity at this point in the series. Instead we're seeing her parents move in with her in a lifestyle and a place none of them can afford, and feels like a bad sit com. In a show about celebrity and female empowerment, shouldn't there be episodes of her being an empowered female celebrity? There's been enough detours, let's get to where we're going. Her family may be amusing at times, but has little to do with her comedy or career, and there's plenty of shows about eccentric dysfunctional families.. Her ex-husband who was the impudence for her launch into comedy seems no longer a source of angst or material. This once was a very original idea, yet past the first season it's adopted the wacky family cliché. While this is good enough to still show promise of the show I want to see, I haven't really seen it since the first season. Midge needs to come into her own. Put Midge on the warpath or put her to bed, this series is directionless, let's get somewhere! After writing this review and finishing the season, I feel by the end, an important character actually addressed many of my frustrations with Midge and the series in a very emotional and gut-wrenching way. She got chopped down to size by someone who would never have the heart to do so. In my original review I suggested that the show was at it's best when Midge would refuse to let people put her in her place. Ironically, by the end someone certainly did, and it's likely the best thing to happen in the series since the first season. I now have high expectations for the next. The final episodes are significantly closer to being the show I've been wanting to watch. I really enjoyed parts of the last 3 or 4 episodes. There were pretty significant events in the 6th and 7th episodes which most certainly should have had fallout, but they neglected to follow up on. I somewhat hope they just ignore these incidents, as most of them involve story lines that should no longer be relevant. The one from the 7th episode almost certainly demands follow up, and I'm shocked it wasn't done in that very episode if not the next, yet it still lingers. You don't get to shame powerful people publicly without an aftermath. Despite these complaints, the last few episodes have been among the best and the final one was brilliant, I'm about to watch it again. I just feel this final episode should have happened at the end of the previous season. I've now added an additional star to my original review. The season is short and does waste time in early episodes, but I do feel the series has now redeemed itself or is on the path to doing so.
339 people found this helpful

GypsycynReviewed in the United States on February 18, 2022
3.0 out of 5 stars
Season 4 almost hurts
I was looking forward to this season so much because seasons 1-3 were so well written, fun, entertaining and so unique! But season 4 definitely lost the momentum. All the characters are angrier, not funny. The quirks each of them had over the first 3 seasons don't exist in this one. Its almost like the writers decided to rewrite them with uncharacteristic lines. There's no flow. Even the directing seems off the game. I hope the next few episodes they release bring back the magic from before.
306 people found this helpful

BeckyReviewed in the United States on February 18, 2022
3.0 out of 5 stars
Where's the funny?
What happened?? The other seasons were hilarious! Where are the jokes? I hope it gets better!
251 people found this helpful

Jack HudkinsReviewed in the United States on February 19, 2022
1.0 out of 5 stars
OMG -
Seriously, if you like overwritten, overacted, self-absorbed stories about nothing....this show is for you.
263 people found this helpful

AzoicReviewed in the United States on February 18, 2022
4.0 out of 5 stars
Each Season lost some snap, but Season 4 snapped back midway.
Each season stepped down a half-star. Mrs. Maisel started out funny, but lost a little oomph each season. So far, only S4E1 & S4E2 have been released. Hopefully it will get better. It did. My update is further down.

Some of the supporting cast seem to carry it off better than the stars. The lead characters are straining to be believable, but don't make it. The show meanders between trying to be dumb but entertaining, like "I Love Lucy." That doesn't fit the original premise of the series - an entertaining story about a funny, intelligent, interesting comedienne. It may be due to the writing: there is too much of a struggle searching for material and the script is now lackluster. It confuses drama versus comedy and can't get the right mix.

We all have moments of excessive profane outbursts. Some of the language here is unnecessary, as if it were a special effect. It gets boorish.

I live in a dream world where subsequent TV seasons can grow better, but it doesn't always work that way. I must rein in those expectations!

Update: Season 4 Progressed
The fullness of the rest of the cast began to restore the series in 4 to 6. Episodes 7 & 8 continued the climb to where I enjoyed it. The lead character improved (the first season was still the best) and the story developed, too.

As Season 4 improved, my rating went from 2, to 3, to 4-stars. Now, I look forward to Season 5 - the last season.
205 people found this helpful
See all reviews
Back to top
Get to Know Us
Make Money with Us
Amazon Payment Products
Let Us Help You
EnglishChoose a language for shopping. United StatesChoose a country/region for shopping.
© 1996-2022, Amazon.com, Inc. or its affiliates